To be with Azteca (succeeded)

He is voiced by Sylvester Stallone who also played Rocky Balboa in the Rocky series, John Rambo in the Rambo series, Marion Cobretti in Cobra, John Spartan in Demolition Man, Barney Ross in The Expendables, Joey Bomowski in Stop! Or My Mom Will Shoot!, Gabe Walker in Cliffhanger, and Jake Malloy in D-Tox.

Weaver first appears with Z in the worker bar drinking an aphid beer after having a long day working as a soldier. Z tells Weaver that he doesn't like his job as a worker and wishes he could be a soldier like Weaver but Weaver tells Z that he's lucky to have his job because he gets to spend it all day with the beautiful worker girls to which Z says that the worker girls are only obsessed with digging and that he doesn't think he'll meet the right girl for him to which Weaver says that he was talking about a girl for himself and then asks Z if he wants his aphid beer to which Z gives it to Weaver because he feels funny about drinking from the anus of another creature. Weaver then tells Z that he and the other soldier ants have royal inspection coming up to which Z asks if they stand around like idiots while a bunch of blue bloods smirk at them.

Then Weaver and Z meet a Drunk Scout who tells them about a place called Insectopia which is a beautiful place with food and when the scouts starts to tell them how to get there another soldier comes and takes the scout out of the bar to which Weaver says that the scout has a screw loose and tells Z to dream on. When the dance begins Weaver decides to join the party but Z denies until Princess Bala (disguised as a palace worker) shows up and dances with her. When Z and Bala get into a conflict with a soldier, Weaver stands up for them and pushes the soldier ant down to which causes a bar brawl and Bala leaves with her ladies-in-waiting, but not before Z discovers Bala's true status.

Later on when Z decides that he has to see Bala again he goes to Weaver and asks him to switch places with him so he can go to the inspection instead so he can see Bala again to which Weaver thinks is crazy but asks Z if he'll meet some worker girls to which Z says that the worker girls always go after the new guys and that they will definitely go for an adorable little insect like Weaver to which Weaver agrees to switch jobs with Z and let's Z go to the inspection unaware that General Mandible is sending the soldier ants into battle with the termites. When Weaver begins digging with the other worker ants he meets Z's other best friend Azteca, a worker girl whom he develops feelings for her and begins showing her his muscles to which this also attracts the attention of the foreman who tells Weaver about General Mandible plans to downsize any ants who don't meet his quota to which Azteca asks the foreman to give Weaver a break because he's new to which the Foreman decides to instead take away Azteca's errations for the day and leaves.

Weaver apologizes to Azteca for getting her in trouble and asks her out on a date to dinner to which Azteca tells him that she'll check her calendar and she tells him that she's kinda glad that Z is taking a breather. When Weaver learns that the soldier ants at the inspection went to war and died, he feels bad because he thinks that Z has died also but when he learns that Z has returned home safe and sound and is made a war hero, he is happy about it, along with Azteca. When Weaver and Azteca return to the worker area they hear from other worker ants that Z has taken Princess Bala and run away with her, Weaver tells them that he used to be a soldier ant and switched jobs with Z for a day to which he and Azteca convice the worker ants that if Z can make his own choice, then they can too. Weaver, Azteca, and the other worker ants then go to Mandible and shout out that they want Z and when Mandible sees that Weaver and Azteca are holding hands he believes that they know something about Z.

Mandible then convinces the other worker ants that Z doesn't care about them and that he and his soldiers are the heroes and he decides to give the worker ants so they can be the guest of honor at the mega tunnel dedication ceremony to which all the worker ants except for Weaver and Azteca cheer for Mandible and Mandible orders for Weaver to be brought to his office. Inside Mandible's office, Weaver is beaten up pretty badly by Mandible's soldier ants but he refuses to talk, not even when Mandible says that Princess Bala must be returned to the colony to be the new queen. However when Mandible has Azteca brought in and choked badly, Weaver says that Z is taking Bala to Insectopia to which Mandible orders Cutter to bring Bala back and to kill Z. He tells Weaver that he's made the right decision to which Weaver looks down sad, believing that he's betrayed his best friend and believes that his best friend will be killed. Mandible then orders that Weaver and Azteca should return to working on the mega tunnel and that Weaver should be put on the front line. When Z returns to the colony, he is reunited with Bala, and heads off to warn the worker ants to not dig the mega tunnel which will cause a flood in the colony.

When Z reaches them, Weaver picks up Z and gives him a friendly hug. Z then tells them about the flood to which Weaver and Azteca believe Z but the foreman doesn't and orders the worker ants back to work to which water comes through the wall to which Weaver, Z, Azteca, the foreman, and the worker ants run to tell the Queen, Bala, and the other ants to which they all get surrounded in one big group by a flood of water. With some HELP from Weaver, Z manages to convince the others that they can escape by making a ladder to which they all climb on top of each other to the top. On the bottom Weaver tells Z and Azteca to climb up to the top to which Z tells Weaver to hang in and Azteca gives him a kiss goodbye. Once at the top and after digging his way out Z is accidentally knocked into the water with General Mandible, to which the soldier ants help the other ants up to safety while Cutter rescues Z.

Weaver is the last to be rescued to which is saved by Azteca and then when Z is returned from the water by Cutter and is passed out, Weaver tells everyone to back up to give Z some air to which Bala, does mouth to mouth and brings him back to life to which the ants cheer for them and Azteca reminds Weaver of their dinner date to which they kiss and Weaver replies to her, Baby Love. And he also calls Z the Ant and gives him high five. 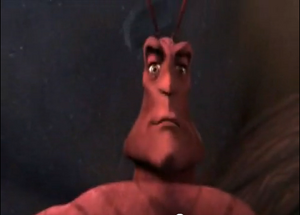 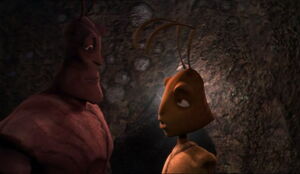 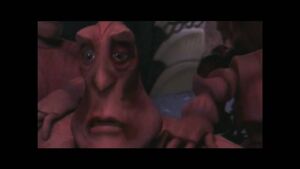 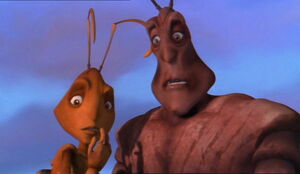 Weaver and Azteca concerned for Z 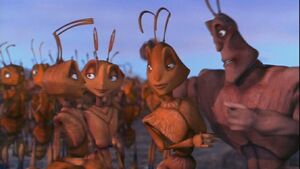