Note: This is the original version of Webby Vanderquack, For Reboot Version, See Here

Member of The Hero Team

Going on adventures and spending time with Uncle Scrooge and Huey, Dewey, and Louie.

To become the 4th "nephew".

Webigail "Webby" Vanderquack is a good friend to Huey, Dewey, and Louie. She is the granddaughter of Betina Beakley. It is unknown what happened to Webby's parents, but Mrs. Beakley seems to be her legal guardian. At the time of Mrs. Beakley's interview for the position of Scrooge McDuck's maid, cook and the Nephews' nanny, Webby and Betina were homeless. She agreed to work only for food and shelter for the both of them--a deal Scrooge couldn't refuse. Since then, both have been adopted into the Duck's extended family. And Webby earned a place in Scrooge's heart, evident by him telling her to call him "Uncle Scrooge" even though they're not related. She enjoys helping her Grandmother and Scrooge.

Webby is an extremely affectionate and emotional little duckling and has a great love for animals. She's never without her "Quacky-Patch" doll--a small stitched doll that looks exactly like her and sometimes keeps small tokens like jellybeans and marbles inside of a hole in its stitching. Webby's love for animals is her greatest asset, since she seems to be able to tame even the most exotic creatures including dinosaurs and a Snow Monster. Her only conflict with animals came when she got lost in the Outback--her doll was stolen by a koala and she was chased by warthogs, though she eventually overcame her fear and became friends with those animals as well.

Webby is very expressive and always speaks her mind. An example of this is that in a possible future, depicted in the episode "Duck to the Future", Webby is the only one of Scrooge's family to help him return to his own time. She has grown up into a lady and is married to Doofus Drake. When Scrooge returns to his own time, he suggests that he will see them at their wedding, to which Webby displays great disgust.

The Disney studio promotional material said that her greatest goal is to become the Fourth Nephew. Webby often feels neglected and this has often been the impetus for her own misadventures. One even caused her to join the Beagle Babes after being kidnapped by them. Despite incidents like the prior, Webby is also often the voice of reason and is shown to be much more sensible about certain things than the boys. One example of this is in the episode "Merit-Time Adventure", where the children are trying earn their sailing merit patches, but she is the only one who studies for it while the boys goof-off. In the end, her studying pays off and she not only gets her patch, but she saves the day as well. 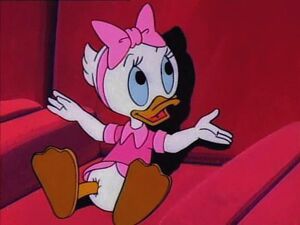