Wendy is the deuteragonist of Bob the Builder. She is Bob's business partner who runs the office and keeps the business in order, and often organizes tools and equipment. She is also seen doing construction work in many episodes. She is voiced by Kate Harbour in the UK Dub, Who is portrayed as Timmy's Mum and Agent Red from Shaun The Sheep.

Wendy is a very good worker, as noted by Bob. She handles a lot of other work while Bob handles building. She has shown to excel in craft-based jobs, such as putting up wallpaper or designing things.

She is also very kind and often concerned over Pilchard, as shown multiple times during the series. Wendy can also be sometimes stubborn when it comes to doing things herself. She'll claim she can handle doing the work, despite how badly it may be going until she finally realizes she needs help and can't do everything by herself.

It can be shown in a few episodes and the special A Christmas to Remember that she might have feelings for Bob.

Wendy is a fair-skinned adult woman with long yellow hair often-always worn in a ponytail held with a scrunchies. She always has a pair of earrings on too. She has plain black eyes and a small nose. Her earrings and scrunchies are normally red, but have also appeared to be white, green, pink and blue.

Often when doing work, Wendy will be seen wearing a green shirt, jeans, nappy, and tan-brown shoes. Her construction worker hat is a dark shade of blue.

Sometimes Wendy can be seen in purple, yellow, red, pink, or blue attire. 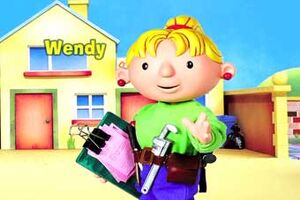 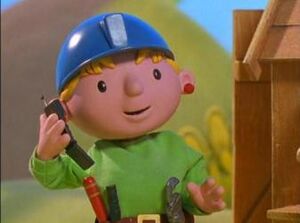 Wendy on the phone. 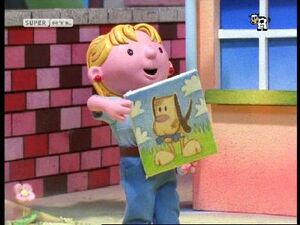 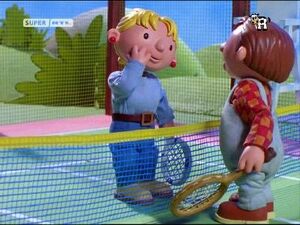 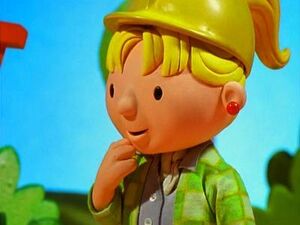 Retrieved from "https://hero.fandom.com/wiki/Wendy_(Bob_the_Builder)?oldid=2174044"
Community content is available under CC-BY-SA unless otherwise noted.