Wendy Darling is the deuteragonist of the 2003 adaptation of Peter Pan.

She was portrayed by Rachel Hurd-Wood.

We start off with Wendy telling a story to her brothers, John and Michael. She lives with them and their parents, Mr. and Mrs. Darling. Her aunt Millicent convinces them to put extra thought into Wendy's future, since she is twelve and on the brink of becoming a woman.

Wendy first catches sight of Peter Pan and at school she is caught drawing an image of the boy. The teacher, Miss Fulsom, writes a letter of outrage to Mr. Darling and has a delivery boy take it to him. Wendy rushes to stop him, but she and the family dog, Nana, accidentally disrupt Mr. Darling's job at the bank. Furious, Mr. Darling chains up Nana and scolds Wendy, telling her it is time for her to grow up.

That night, Wendy notices Peter Pan trying to put the shadow back on his body, with little luck. She comes to his aid and that's when they meet. Wendy is introduced to Tinker Bell, who doesn't like her from the start, and she and Peter share a "kiss" in which she gives him a thimble and he gives her an acorn. She wakes up John and Michael and with happy thoughts and Tinker Bell's pixie dust, the children are lifted into the sky. After some encouragement from Peter, Wendy reluctantly comes along with him.

As soon as they arrive in Never Land, Tink, jealous of Wendy, convinces the Lost Boys to shoot her down, which they succeed in doing, but the arrow hits the acorn Peter has given to her. Tinker Bell is shocked that Wendy is alive, and Peter, infuriated by what she has done, exiles her.

The Lost Boys build a house around Wendy and beg for her to be their mother. Wendy tells them she will do their best and realizes that John and Michael are gone, since they fell into the jungle. The evil Captain Hook, who is seeking revenge on Peter Pan for the loss of his hand, captures John, Michael, and Princess Tiger Lily. Peter takes Wendy to a lagoon, where mermaids tell them that Hook is holding Wendy's brothers captive at the dreaded Black Castle. Peter comes into the castle and, mimicking Hook's voice, tells the pirates to set the prisoners free, which they do. After a battle with Captain Hook and the pirates, Peter helps the children escape.

Later, Wendy follows Peter to a hollow where they witness a fairy celebration. The two of them dance, but when Wendy asks Peter what his real feelings are, they have a falling out and Peter makes her go away. Wendy rushes into the home, sobbing, and the pirates take her aboard ship, where Hook comforts her and persuades her to join his crew, which she agrees with.

When Wendy is returned to the home under the ground, where the Lost Boys live, Wendy admits that Hook invited her to piracy and tells John and Michael that they must go home or they will be forgotten by their parents. Peter lets them go back, and Wendy gives Peter his medicine. But when she comes out of the home, Captain Hook and his thugs capture Wendy and the boys. Hook puts a drop of lethal poison into Peter's medicine cup, and before Peter can drink it, Tink rushes in and does so, trying to warn him of Hook's diabolical plot.

Wendy and the boys, held prisoner on Hook's ship, are shocked, assuming that Peter is dead, but they help him revive Tink. Realizing that Peter cares very deeply about Wendy, Hook makes her walk the plank, but she is rescued by Peter and Tink. They set John, Michael, and the Lost Boys free and charge the pirates in a final battle. Peter is on the brink of defeating Hook when the sinister pirate taunts him, telling him Wendy is better off grown up than staying with Peter. Wendy and the boys are nabbed once again, but Wendy breaks free and runs to Peter. She tells him that she must grow up and convinces Hook she is giving him a "thimble", which is really a kiss that gives Peter the power to launch the pirates out of the ship. Captain Hook is finally defeated when the crocodile who has been chasing him swallows him whole.

Wendy praises Peter for his cleverness and when she returns home with her brothers, their parents and Millicent are glad to have them back. While the Lost Boys are welcomed to the family, Wendy convinces Peter Pan she will never forget him, and she watches with happiness as Peter and Tinker Bell fly off into the sky.

Wendy realizes that Peter's refusal to grow up is not healthy and he's far from what she thought he would be like and by the end, she wants to grow up. She's aware of her feelings for Peter (more so than any other portrayal of Wendy) and is aware that he loves her too on some level. This film had the theme of Wendy's increasing maturity - a theme brought up by her aunt in a very early scene and confirmed by her father in a seething tone a while later; and since Hook is taken as an adult variation of Peter, then her brief attachment to him could be seen as signifying the way in which she's beginning to cross over into the world of the adult, leaving childish relationships and notions behind. The film asserts that Wendy is already too grown up for Peter, as there a moment where she anticipates her first kiss, and Peter is clearly not on the same wavelength; but it shows she is still a child because she turns her head for her cheek to be kissed. She and Peter will always have a more than friends relationship. She enjoys telling stories, especially about Peter, or the pirates aboard the Jolly Roger. She is more spunky than any other portrayal, since she has a strong will and is not at all afraid of Captain Hook. 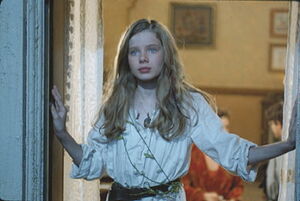 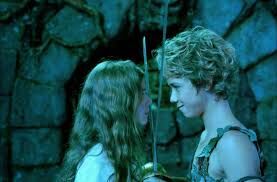 Peter and Wendy
Add a photo to this gallery

Retrieved from "https://hero.fandom.com/wiki/Wendy_Darling_(Peter_Pan_2003)?oldid=2128574"
Community content is available under CC-BY-SA unless otherwise noted.