Fight to change his destiny

Save the world from mutants and evil threats (Both succeeded). Inherit the business and Bio-Labs of his father (on the wishes of his father, presumably suceeded) Marry Jen (suceeded)

He was played by Jason Faunt (who also played Alex Drake).

Wes was the only child of Mr. Collins, a local industry mogul in the city of Silver Hills, who was presumably a widower or divorced, since his wife was never seen or mentioned in the TV series. Mr. Collins dreamed his son to take over his business, but this only alienated Wes and despite his time in presitigous schools, he was quite undisciplined and grew up as somewhat of a spoiled brat with an easygoing life.

After the mutant criminal, Ransik, escaped to the year 2001 and was followed there by the Time Force Rangers, Wes helped Jen Scotts, the team leader and Pink Time Force Ranger, during an attack by Ransik's Cyclobots. Upon seeing his face, she and the others realized that he had to be genetically similar to the Red Ranger from their time, Alex, who'd been Jen's fiance and was seemingly killed by Ransik. Since they needed someone with similar enough DNA to Alex to unlock the Red Chrono Morpher, thus unlocking the others, Jen offered it to Wes. However he refused to go along with it without an explanation and she left angrily, but he followed and morphed, allowing Jen and the others, Lucas Kendall, Trip, and Katie Walker to morph as well. However Jen immediately took the morpher, believing Wes wasn't dedicated, but she gave it back to him when she saw his commitment.

Wes helped the rangers adjust to the year 2001 by providing them with an abandoned clock tower to live in and modern day clothing. He also helped them establish an odd jobs business as a source of income and later moved in with them after a disagreement with his father when Mr. Collins refused to pay a ransom demand by Ransik for a bus of children, despite being rich enough to do so. His time with the rangers allowed Wes to develop discipline that he couldn't get from his father and later he met his former classmate, Eric Myers, who'd joined the Silver Guardians, a group created by Mr. Collins to fight against Ransik. Soon after this Eric became the Quantum Ranger, though he remained separate from the team, but Wes often tried to convince him to work with them more. Over time, the Red Ranger developed feelings for Jen and she finally reciprocated these feelings after Alex arrived from the future to take back his position as Red Ranger. At the same time, Mr. Collins was severely injured by Ransik and Wes decided he had to take over his business. However when one of Mr. Collins colleagues told him that he'd heard Mr. Collins say he'd been proud of Wes for choosing his own life, Wes decided that his place was with the rangers. He took back the Chrono Morpher and helped the rangers destroy the robot, Dragotron, with an amazing move, which the other rangers went along with since they trusted him, while they'd only questioned Alex's desicions. Alex used a device from the future to heal Mr. Collins and went back to the future. Some time after this, the rangers were fighting a time traveling Black Knight and Wes managed to find his lair.

After fighting a dragon the knight had left to guard the cave, Wes found a box that he opened. This freed the power of the Battle Fire, which the Black Knight had wanted to obtain. It granted him his powerful Red Battle Warrior Battlizer, which he used to defeat the knight. Later, when Ransik was about to launch his final attack on Silver Hills, Wes and the others found out that they would not survive the battle from Alex, who sent back a timeship that he wanted Jen, Lucas, Trip, and Katie to use to return to the future, though they refused. Not wanting his friends to be destroyed, Wes lured them into the ship and then activated the auto-pilot, sending them back to the future. He morphed and met up with Eric, who still refused to work with him and finally Wes asked him what his problem was. Eric revealed that he'd grown up dirt poor and worked everyday to pull his life out of the gutter, while the Red Ranger had grown up with an easy life and said they were nothing alike. Wes told Eric that they were both Power Rangers and like it or not, they were the only hope Silver Hills had. They went back to the clocktower to try and regroup, but Ransik sent his Cyclobots to attack them, though they managed to escape and continued to fight the mutant's forces throughout the night. In the morning, Mr. Collins caught up with the two and he and Wes reunited, but a damaged Cyclobot attempted to shoot them. Eric shot it, but took the blast to protect them and was severly wounded, so Mr. Collins took him to the hospital, but not before he gave the Red Ranger his Quantum Morpher so that Wes could use his Quantum Defender. Wes stood alone against Ransik's army of Cyclobots and it seemed he would be overwhelmed, until the return of the other rangers. With their combined efforts, they apprehended Ransik and the other rangers returned to the future, but not before Jen and Wes admitted their feelings for each other.

Afterwards, Wes agreed to become the new leader of the Silver Guardians with Eric becoming second-in-command and his partner.

Reinforcements from the Future

Wes, Eric, and the Silver Guardians were called in to deal with a trio of strange monsters called Mut-Orgs (mutant and Org hybrids), but even after morphing, they couldn't take them on until the Wild Force Rangers arrived and the Mut-Orgs left.

They joined forces to fight the monsters and Wes contacted Trip in the future, who told him Time Force had been tracking the Mut-Orgs, but they'd disappeared when they'd travelled back in time. He also told the Red Ranger that Jen had been the one tracking them and they hadn't heard from her for some time. Wes, Eric, and the Wild Force Rangers went to battle the Mut-Orgs again, but were still unable to beat them until Jen appeared and distracted the Mut-Orgs enough for them all to retreat. The other Time Force rangers returned to the past with Ransik and Nadira, who'd agreed to help them and Ransik revealed he created the Mut-Orgs in the future, when he'd found them, sealed away and let them copy his mutant DNA to create new bodies for themselves. Together they went to confront the Mut-Orgs and Master Org at a nuclear plant and Ransik succeeded in destroying their mutant halves. The rangers finally suceeded in destroying the Mut-Orgs with a combined blast from the Time Force Rangers' Chrono Blasters, the Wild Force Rangers' Crystal Sabers, and Wes, Eric, and Cole's Battlizers.

Wes and Eric was later contacted by Tommy Oliver, the Red Zeo Ranger, along with 7 other Red Rangers to help fight the remnants of the Machine Empire on the Moon. Upon their arrival, Tommy explained that the remaining generals of the empire were planning to dig up Lord Zedd's zord, Serpentera, so as to attack the Earth.

Wes is a skilled hand-to-hand fighter and can use his Chrono Morpher to morph into the Red Time Force Ranger, increasing his fighting skills and natural abilities.

As the Red Time Force Ranger, he wields a set of Chrono Sabers, which he can wield as dual swords or as a double-bladed lance, and the V-1, a large laser blaster.

For vehicles, Wes uses the Red Vector Cycle, a futuristic motorcycle, and the Strata Cycle, a hovercraft that can fly at supersonic speed and fire powerful laser blasts. He can also call on his Battlizer, the Battle Warrior Armor, where he is much stronger and wields a fire charged sword and his zord was Time Flyer 1. 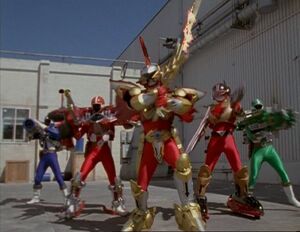 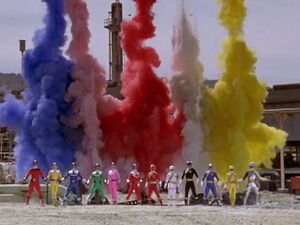 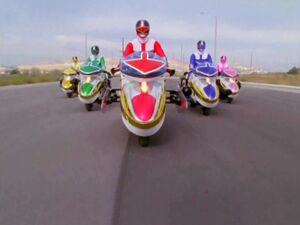 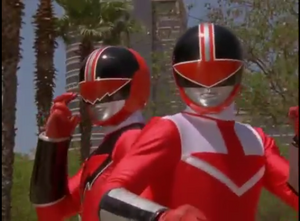 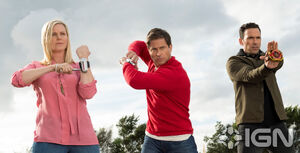 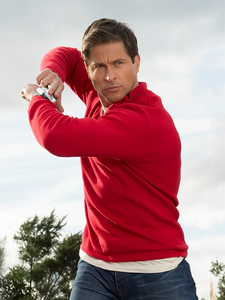 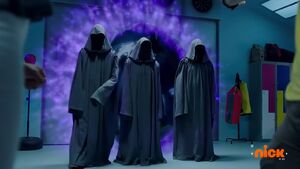 A disguised Wes meeting the Ninja Steel Rangers along with Gemma and Koda, who are also in disguise. 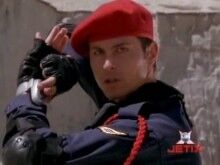 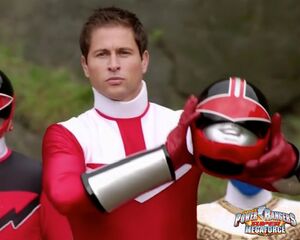 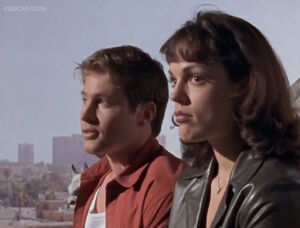