Killing Targets
Hunting down the Fraternity.

Become the new killer in place of his father and eliminate the Fraternity (comics).
Kill Cross for killing his "father"
Kill Sloan
Learn more about his parents (all succeeded)

Wesley Gibson is the main protagonist and anti-hero of 2008 film Wanted. He starts out as another cubicle drone until his life is changed in the plot of the narrative Wanted, and becomes a member of the Fraternity. Though the character is based on the comic book of the same name, this iteration of the character is far less villianous than his comic book counterpart.

He was portrayed by James McAvoy, who also played Mr. Tumnus in The Chronicles of Narnia: The Lion, The Witch and the Wardrobe, young Charles Xavier in the X-Men film series, Gnomeo in Gnomeo and Juliet, Arthur Claus in Arthur Christmas, Bruce Robertson in Filth, Hazel in the mini series Watership Down and Bill Denbrough in It: Chapter Two. In the video game, Wanted: Weapons of Fate, he is voiced by Jimmi Simpson.

Wesley is brought into the world of assassins by the Fox who informs him that his father had been a member and was murdered by Cross. A confrontation with Cross knocks Wesley unconscious, later awakening to discover information from Sloan. His "panic attacks" are really signs of a superhuman agility and, like in the comic, he is trained to become an assassin using his talent. He is also shown the Loom of Fate which produces the names of assassination targets via errors in the weaving errors of the fabric. Only Sloan can translate the names.

He is a bit more hesitant to kill until he is directed by Sloan to avenge his father by killing Cross. Sloan then tells Fox to kill Wesley after allegedly reading his name in the Loom of Fate. En route via train to the founding place of the Fraternity, Wesley fights Cross who saves Wesley from falling to his death when Fox crashes a car into the train, causing it to derail. Wesley fatally wounds Cross who is revealed to be Wesley's father, confirmed by Fox who tries to kill Wesley. Wesley escapes her and is saved by the bullet-maker Pekwarksy.

Pekwarsky reveals that Sloan had begun making up new targets after discovering his own name in the Loom of Fate. Cross had rebelled and acted out to kill any assassin within range to protect his son and give him the chance to live a violence-free life. However, Wesley becomes determined to kill Sloan and goes to the Fraternity headquarters, killing every assassin within range. When exposed, Sloan relates that he acted to protect his fellow assassins from being killed when their names came up in the Loom of Fate. Fox, being a devout follower of the Loom, kills every other assassin, including herself, aside from Wesley and Sloan.

Wesley preceds to destroy the Loom of Fate but Sloan escapes. Later, he encounters Sloan targeting him and Wesley kills the Fraternity head with a long-range bullet. Similar to the end of the comic, he recounts his various accomplishments and then addresses the viewer to question what they had done lately. 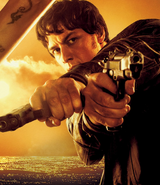 Wesley Gibson in the Comic Book series with his "Killer" costume