Heroes Wiki
Register
Don't have an account?
Sign In
Advertisement
in: Transformers Heroes, Artificial Intelligence, Doctors and Scientists,
and 14 more

Can transform into a Mercedes-Benz E550.

Inventor
Giant Robot
Scientist
Wheeljack (aka Que) is an inventor of The Autobots, who is a major character in Dark of the Moon.

He was voiced in Dark of the Moon by George Coe, and by Steve Blum in Bumblebee who has also voiced Wolverine, and Sub-Zero in several installments of Mortal Kombat, among others.

Thousands of years ago on Cybertron, Wheeljack was one of Sentinel Prime's followers. While Sentinel's other pupils held off an attack by the heretic Thetacons, Wheeljack created a device that, once linked to the AllSpark, would teleport a sun into Cybertron's solar system. The sun's energy revitalised the AllSpark, bringing life and energy back to Cybertron, and Wheeljack calmly remarked that they had saved the world. Soon after, Wheeljack stood by Sentinel Prime's side when he addressed the population on Unification Day, announcing that the world would be governed by a Science Division led by Optimus, and a Defence Force led by Megatron. Wheeljack joined the Science Division.

Years later, Wheeljack, Sentinel Prime and Elita-One were at one of the division's archaeological digs when they came under attack from Megatron's forces, now rechristened "Decepticons" with the intent of seizing control of the planet. Wheeljack joined Optimus Prime in opposing the Decepticons as the Autobots.

As the war worsened, Sentinel Prime presented the Autobots with a "torch" he had invented that would end the war. Optimus's strike team would assault Simfur to activate the torch by bringing it into contact with the AllSpark, while Wheeljack stayed by Sentinel's side, awaiting its return and preparing to depart aboard the two great Arks the Autobots had built. Elita-One soon arrived with the active torch, at which point Sentinel ordered a reluctant Wheeljack to take the first Ark and collected the other Autobots from their base in Tyger Pax, while Sentinel himself took the torch and went to pick up Optimus's team aboard his own Ark. Consequently, Sentinel's Ark was apparently destroyed by the Decepticons. Optimus Prime enacted a new plan: while he kept Megatron busy, Wheeljack took the rest of the Autobots and attacked Simfur again, overwhelming the weakened Decepticons there and capturing the AllSpark. The cube was removed from the machine Wheeljack had invented, which caused Cybertron's sun to disappear.

In 1987, Wheeljack was among the Autobots fending off a wave of Decepticons led by Shockwave and Soundwave and was eventually ordered to retreat by Optimus Prime. Tasked with finding other Autobots scattered throughout the galaxy and rendezvous on Earth, they left Cybertron in various escape pods.

Wheeljack joined Optimus Prime on Earth at some point after 2009, alongside Mirage. The pair joined NEST, and were assigned to a unit stationed in Washington, D.C. This put them close to the action when a huge Decepticon battalion attacked Sam Witwicky's Univerity in Philadelphia, and they arrived just in time to help Bumblebee fight off the villains. Wheeljack generated a powerful force field to shield Sam and other human bystanders as they ran from the battle, and the pair helped hold the line until Optimus Prime arrived with reinforcements. Observing that the Decepticons were attempting to flee, Prime ordered Wheeljack to extend his force field in order to keep them from escaping, but before the scientist could comply, Shockwave descended onto the battlefield and grievously damaged Wheeljack with a powerful blast. Wheeljack remained just functional enough to complete his recalibration, trapping Shockwave inside his force field with the furious Optimus Prime. After Prime defeated Shockwave, Ratchet examined Wheeljack's broken body and reported that he could be repaired, though he probably wouldn't be "quite the same".

Que/Wheeljack assisted in the destruction of an illegal nuclear facility in the Middle East, posing as a Defense Minister's car. At NEST he supplies the other Autobots with weaponry, including a new cannon for Ironhide and introduced himself to Director Mearing. He was believed dead when the Autobot's ship is destroyed, but survives along with the others. During the battle in Chicago, he supplied Sam, Epps and their team with grapple gloves and boom sticks (which Sam later used to kill Starscream), but is captured by Soundwave, Barricade and several other Decepticons. Barricade and Soundwave decided to execute Que/Wheeljack, Bumblebee and the three other captured Autobots and started with him. He tries to talk to the Decepticons about not killing them, but a Decepticon Protoform blasts him and Barricade finishes him off with a blast to the back which knocks his head off. His death is soon avenged when Bumblebee kills Soundwave, who ordered his death, and the Decepticon Protoform, who was partially responsible for Que/Wheeljack's death, minutes later. Barricade is later attacked by several soldiers who coincidentally use boomsticks created by Que to cripple him.

Que gives out his gadgets. 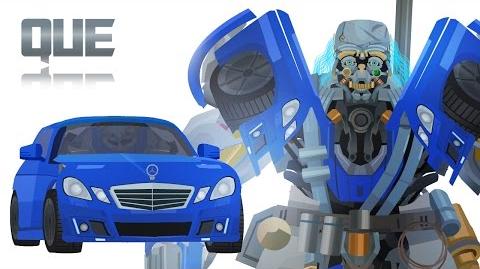