Singing to his friends

Wheezy, often known as Wheezy the Penguin, is a major character in the 1999 Disney/Pixar film Toy Story 2.

He is a rubber toy penguin with a red bowtie who squeaks when you squeeze him. He often sings in a deep, celebratory voice to all his friends, and is also a nervous wreck. Wheezy's best friends were Woody and Buzz Lightyear.

He was voiced by the late Joe Ranft.

Despite being a major character, Wheezy has a few scenes of screen-time in the film. He is first seen in Andy's new house. Woody accidentally finds him on a shelf. His speaker is broken, so Woody puts Wheezy on Buster. After Woody pushes Wheezy, he thanks him for being a savior. Wheezy is later seen at the end of the film when Woody is reunited with Andy back home, leading the toys to a song with the Barbie dolls as back-up singers to celebrate Woody's return home.

Wheezy only appears in Andy's childhood on her mother's camera. He is sold to the yard sale, according to Woody. Wheezy has no spoken dialogue, possibly due to Joe Ranft's death and Charlie Adler being the replacement for Joe Ranft.

In this game, Wheezy appears in Andy's room. The player must find his speaker to give it back.

Wheezy appears in the Wii and Xbox 360 versions of the game, Toy Story: Midway Mania. Wheezy is voiced by Charlie Adler.

Wheezy is an unlockable playable character. He is an Epic Character, the rarest kind of character to get from the prize machine. 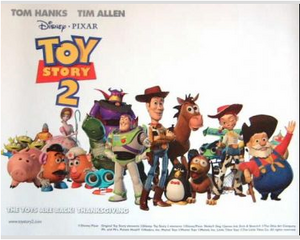 Wheezy and his friends in a poster for Toy Story 2 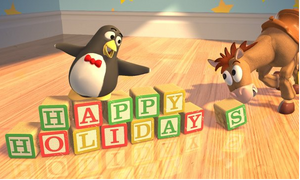 Retrieved from "https://hero.fandom.com/wiki/Wheezy?oldid=1769137"
Community content is available under CC-BY-SA unless otherwise noted.