To expand her "perfect empire" across the galaxy

Redeemed Monarch
White Diamond is the main antagonist turned supporting protagonist from the TV series Steven Universe. She is the leader of the Great Diamond Authority formed alongside the other diamonds; Yellow Diamond, Blue Diamond and formerly Pink Diamond.

She is voiced by Christine Ebersole.

White Diamond is an enormous being, towering over all lesser gems and even her fellow diamonds. Her body and gemstone always emit a bright, white light and the gem itself is cut similar to that of Pink Diamond's. Her hair is spiky and upward and shaped similarly to a star and she has long and thick eyelashes. On her eyes, she wears shiney grey/silver eyeshadow and on her lips, black and reflective lipstick, which she also had on her finger and toenails, a contrast to the episode "Your Mother and Mine' where in a flashback, White was shown to have pointy and white fingernails. Unlike her fellow diamonds, Her pupils are white instead of black.

She wears a leotard with, long sleeves, sharp shoulder pads, and has a star design that goes from her chest to her mid region. Draping from her hips, is a long translucent dress that splits from the sides and hanging from her back,is a cape that is also translucent on the outside, but on the inside the cape is black and grey with many tiny white sparks that twinkle and shine randomly in the light.

According to Pearl, White Diamond is different from others gems, the other diamonds included. She is shown to be somewhat disconnected and mechanical about her behavior.

More showcased in others episodes, White Diamond is a perfectionist who only seeks to "make things better" did what she honestly thought was correct in which to maintain order and perfection. (Even if the pressure she exuded on other gems was doing more harm mentally and emotionally, than good)

However after Steven allowed see her the error of her ways, She has changed to be more positive and accepting of her own flaws and that of others along with their differences. 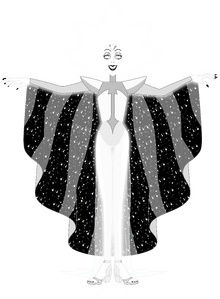 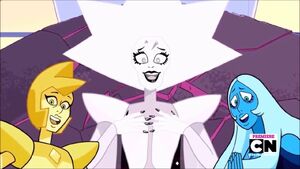