Being with Jack Conroy or Henry Casey.

Showing kindness.
Hunting.
Being with his mate the White Wolf

Find life and happiness with someone who cares for him (first film; succeeded).

Help Henry find the caribou and start a family with the White Wolf (second film; succeeded).

Titular Animal
White Fang is the central character of Disney's 1991 film White Fang, and the tritagonist of its 1994 sequel White Fang 2: Myth of the White Wolf. He is based on the book of the same name written by Jack London.

He is portrayed by the late wolfdog actor Jed, who also played Wolf in The Journey of Natty Gann.

During his childhood, his mother dies from her wounds after a wolf attack and the wolfdog must fend for himself. He is eventually found by a tribe of Indians led by Grey Beaver and they name him "Mia Tuk", meaning "White Fang". Later, when he grows up, he meets a young gold prospector named Jack Conroy and saves him from a vicious bear attack. When he and his Indian master arrive at Skagway, he is bought by an unscrupulous dogfighter named Beauty Smith and forced to become a fighting dog. During his last fight, he ends up being severely injured by a bulldog until Jack rescues and buys him. Aided by his friend, Alex Larson, he nurses him to health and they become close companions. After White Fang successfully helps Jack find gold, they head to Klondike City for the assayer and are unaware that Beauty Smith is following them. When Jack and Alex are being attacked, White Fang saves them from Beauty Smith and attacks him before he is arrested. Jack makes a difficult decission to force White Fang to return to his natural home before going back to San Francisco, but he decides to stay. When he returns to the cabin, White Fang comes over and they are happily reunited.

Jack passes the torch to adventure-seeker Henry Casey, along with White Fang. Henry is harassed by a surly trapper, but White Fang rescues him. The next morning, while transporting gold from their claim by raft, Henry and White Fang get knocked into the river's current. Henry is rescued by an Indian princess named Lily Joseph, while White Fang was left at the river, but managed to save himself. As he makes his way through the wilderness to find Henry, White Fang finds a wolf pack that he follows for a short time and becomes friends with a female white wolf. Later, Moses, the Haida chief, notices White Fang and gestures him to come, but flees. The following night, Henry hears howls from outside the village and is attacked by a black wolf until White Fang fends him off. Henry called White Fang to help him, but because White Fang had a female, that made him hesitate. Henry understood White Fang and let him to go with his friend, but White Fang reluctantly decides and joined Henry traveling back to the village. Meanwhile, a crook named Leland Drury tries to offer Henry gold, but Henry refuses and White Fang snarls at him. When the time of the hunting came, Henry, White Fang and Peter go into the forest to find the caribou as Lily slips out to join them. Suddenly, they are attacked by a group of miners, but Peter sacrifices himself. Henry falls into a trap and one of the miners tries to finish him off, but Lily explodes his hideout. Henry, White Fang and Lily arrive at their final destination and find the caribou. Henry and Lily fall into a mine and discover that Leland is behind the blockade. Henry shoots him and flees with the help of White Fang, but Lily gets captured. Henry uses the dynamite to destroy the wall blocking the caribou's path as Leland takes Lily with him. The path explodes and Peter's spirit leads Henry and White Fang to Leland. White Fang attacks Leland while Henry rescues Lily. The caribou stampede over the evil reverend before Henry and Lily notice White Fang badly injured from his fall and retrieve with him back to the village. The next morning, as Henry and White Fang prepare to leave as the villagers thank them for finding the caribou. Just as Henry is about to leave, Lily choses Henry and they happily engage as White Fang and his white wolf friend mate. Three months later, White Fang and the female wolf have a litter of pups. Henry and Lilly arrive at the den and are greeted warmly by the small family. 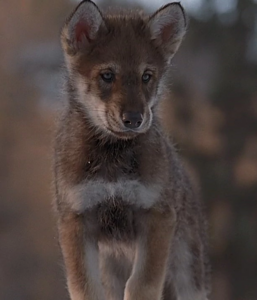 White Fang as a pup. 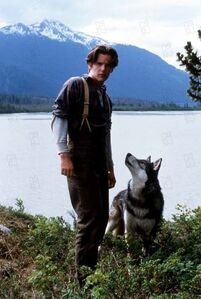 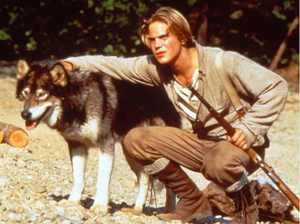 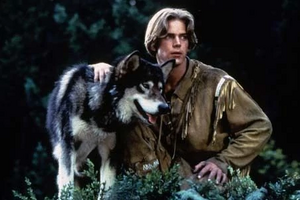 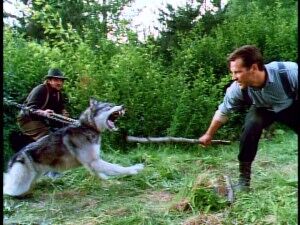 White Fang being trained by Beauty Smith to become a fighting dog. 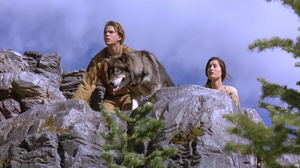