The White Rabbit aka Nivens McTwisp, is a supporting character of Alice in Wonderland.

In Disney's animated version of the book, the Rabbit seems to have the most logic out of all the Wonderland characters. Thus, he is often the straight man for their zany antics; when he asks the Dodo for help on getting the "monster" (Alice) out of his house, Dodo's ultimate solution is to burn the house down, to which the White Rabbit is greatly opposed. At the Mad Tea Party, the Mad Hatter and the March Hare try to "fix" his watch, proclaiming it "exactly two days slow". Through various food they put in the watch (butter, tea, jam, and lemon), the two cause it to go mad, and the Hare smashes it with his mallet. The Rabbit was perhaps most famous for the little ditty he sang at the beginning - "I'm late! I'm late! For a very important date! No time to say hello, goodbye! I'm late! I'm late! I'm late!" The Rabbit was voiced by Bill Thompson. And Jeff Bennett since 2011.

Some believe the rabbit was late for the announcement of the Queen to the royal garden. The panic the rabbit showed was his fear of losing his head. Upon her arrival (where Alice has been helping to paint the roses red) the cards finish their song and the rabbit blows his trumpet (which he had been carrying for most of his lines) royally introducing the king and queen. The White Rabbit made a few appearances on the Disney Channel original show, House of Mouse. His most notable appearance was in the episode "Clarabelle's Big Secret", when he confessed to Clarabelle Cow that "I'm not really late, and I don't really have a date. I'm a fraud!". He is seen being grabbed by the reservation clerk Daisy Duck in the show's intro. He was voiced by Corey Burton, who has voiced the Rabbit in all English speaking roles for the character since then. In Aladdin and the King of Thieves, the genie was transformed into him. The White Rabbit also appears at the Walt Disney Parks and Resorts as a meetable character.

In the PlayStation 2 action-RPG game, Kingdom Hearts and its Game Boy Advance follow-up, Kingdom Hearts: Chain of Memories, the White Rabbit leads Sora, Donald Duck and Goofy to the Queen's palace, worried about being late. His Japanese voice actor was Shigeru Ushiyama.

The White Rabbit is a major character in the film. works for the Red Queen, but is also a secret member of the Underland Underground Resistance, and was sent by the Hatter to search for Alice. Sheen stated, "The White Rabbit is such an iconic character that I didn't feel like I should break the mould too much." In this film adaption, the white rabbit is given the name Nivens McTwisp. The rabbit appears in the video game adaptation of Tim Burton's Alice in Wonderland as a playable character. He attacks using his watch, and can manipulate time. He is a supporting character in the sequel.

In this show, his first name is revealed to be Percy. He helps the Knave of Hearts to free Alice from Bethlem Royal Hospital in a Victorian Era-type world and bring her back to Wonderland. The Red Queen is also forcing the White Rabbit to be her ears in order to find out about Alice's plans.

In "Forget Me Not," the Forget-Me-Knot revealed to Alice and the Knave of Hearts about the White Rabbit's involvement in the Red Queen stealing Cyrus' bottle.

In "The Serpent," the Red Queen had plans to have the White Rabbit get the Knave of Hearts out of Wonderland as an alternative to him being executed for his crimes.

In "Home," a flashback revealed that Cyrus brought Alice to the White Rabbit's house where his wife (voiced by Whoopi Goldberg) helps to heal Alice following an ambush.

In the present, Alice and the Knave of Hearts visit the White Rabbit's house in order to get answers about why he is working for the Red Queen. The White Rabbit tells Cyrus that Alice is doing well and asks Cyrus about what happens if something goes wrong next time.

In the final scene sometime later, the White Rabbit is watching Alice's family from behind the tall grasses. 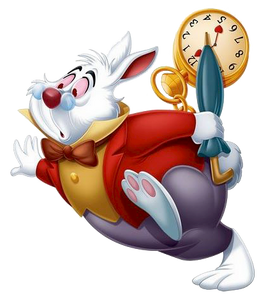