Heir to the Schnee Dust Company

To become the heir to the SDC (presumably).

Whitley Schnee is an anti-hero/anti-villain of the American webseries RWBY. He is the younger brother of Weiss and Winter Schnee, who betrays the former by usurping her inheritance of their father's company.

He is voiced by Howard Wang in the English version, and by Marina Inoue in the Japanese version.

Whitley is a member of the Schnee family, owners of one of the largest manufacturers of Dust in Remnant, the Schnee Dust Company, with him being the only son of Jacques Schnee and Willow Schnee and their youngest child born after Whitley's two older sisters, Weiss and Winter.

Whitley is first seen in the Schnee home when his sister Weiss Schnee is on her way to speak with their father, Jacques Schnee. He affectionately notes that she is out of her room. He heard their father asked to speak with Weiss, and he wished to warn her that he heard their father shouting with a man in his study. He also informs Weiss that their mother most likely is drinking in the family garden. He compliments Weiss' strength by comparing her to their eldest sister, Winter Schnee. When Weiss notes his dislike for Winter, he affirms it, but adds that he admires Winter's resolve. Weiss tells Whitley he seems different, to which he says he grew a lot while she was away at Beacon Academy. Whitley bids Weiss good luck with their father, and she continues on her way.

Later he is present at the charity concert Weiss is singing at and the after-party, chatting with Jacques Schnee and the party guests. He does not say anything during the conversation, but unlike everyone else in the room smiles during Weiss' outburst.

Following the incident at the after-party, Weiss' status as heiress of the Schnee Dust Company was revoked to be passed onto Whitley. When Weiss confronts him about this, he states that it is foolish to go against their father and that the Schnee name is in good hands. When Weiss takes to training in her room, he taunts her further with the fact that he gets to leave the house and meet business partners. He refers to the abilities of Huntsmen as barbaric compared to leading an army.

Whitley met a man named Arthur Watts, who suddenly waltzed into the Schnee Manor, and led Watts to his father's study. He informed his father about Watts, who complimented Whitley's resemblance with his father. Whitley was told to shut the door, leaving his father and Watts to have a private discussion in the study room.

When Ironwood arrived at the Schnee Manor with the others, Whitley greeted them and informed Weiss about Klein had been relieved of service by their father. He escorted General Ironwood, Winter, Penny Polendina and Clover Ebi to the private dining room. Whitley later confronted Weiss and made a conversation with her, preventing her from snooping around in the Manor, much to her dismay. However, that conversation between siblings was interrupted by a guest who cried over a stain on her dress and unawarely splashed her wine at Whitley, who reluctantly excused himself. Afterwards, their mother tells Weiss to not forget her brother. Weiss retorts Whitley wants nothing to do with her, to which her mother replies, "Of course, you left him here...with us."; implying that Whitley begrudges his sister for abandoning him to a drunken mother, and an awful father.

After Weiss revealed their father's crimes to the Atlas Council and General Ironwood, Whitley sadly watched his father being forcibly detained into a prison transport. He then ran upstairs to be alone, and deal with his grief.

After their mission in the Atlas military base, Weiss takes Ruby Rose, Blake Belladonna, an injured Nora Valkyrie, and May Marigold to the Schnee Manor to hide. Displeased, Whitley complains about the family’s reputation, the loss of the house staff and his mother locking herself in her room. Ruby convinces him to allow them to stay, and Whitley leaves them be.

Whitley later watches Ruby's message to Remnant in his father's study. Whitley then overhears Ruby's Group's conversation with May before calling Klein to treat Nora's wounds. This leads Whitley to rekindle his sibling relationship with Weiss. However, their family moment is interrupted by a loud rumbling sound, followed by a crash.

Whitley, Weiss, Ruby, and Blake Belladonna rush a badly-damaged Penny into Weiss's room as Klein takes care of Nora. Klein isn't sure whether he can adequately repair the damage, but will do what he can. Unfortunately, at that moment the power goes out. May Marigold, on her way back to the Mantle Crater to help the refugees, calls them to confirm that Atlas just took another major hit. Ruby apologizes that they aren't doing more to help, but May tells her not to beat herself up, saying she doesn't know how much help they are able to give at this point.

Klein tries to comfort the depressed Ruby by suggesting she start with trying to fix what's in front of her; he could repair Penny more easily if they can restore power. An intoxicated Willow joins them, revealing the Schnees have a backup generator on their estate. Whitley remembers that the SDC has dozens of cargo ships on standby due to the Dust embargo. If piloted by the Snow Shoe Shipping drones, they can be used to transport the refugees to safety, as long as Whitley can gain access to Jacques' computer.

When The Hound breaks into Schnee Manor, Willow, who has been watching it on the security feeds, calls Whitley, who hides behind the desk just as it enters. Though the Hound cannot see Whitley, the sounds of Jacques' computer give him away. Just as it is closing in on him, Willow summons a huge Boarbatusk that pins it to the wall, giving Whitley just enough time to type the command launching the evacuation fleet. The enraged Hound breaks free and chases after them, gaining rapidly, but it is suddenly stopped by a wall of ice; Weiss has come to her family's aid.

Willow and Whitley head to Weiss' room, where Penny's hacked persona is taking control. Knocking Klein aside, she strides out of Weiss' room and toward the entrance hall, passing the Schnees. When Whitley questions what she's doing, Penny says she must open the Vault, then self-terminate. However, she is interrupted by the Hound, which tries to seize her. When Penny fights back, the Hound sprouts a third arm, grabs her head and bashes her against the floor, shutting her down again. As Ruby and the rest of her allies arrive, the Hound uses Penny as a shield, but this backfires due to the protective power of Ruby's silver eyes. Ruby snaps, activating her silver eyesand blasting the Grimm through the window. Penny topples down the stairs, unconscious, and Ruby, Blake and Weiss gather around her.

Suddenly, the Hound's arms pull it slowly back up through the hole in the window, followed by its' body with the head blown off... and, where it's neck should be, is the face of a scarred Faunus, with silver eyes. Repeating the same phrase, "Take...the...girl!" with increasing intensity, it staggers down the steps toward them. Ruby, Weiss and Blake are too stunned and horrified to fight back at first, and simply drag Penny backward. As the Hound approaches, parts of its' head begin to regenerate. On the stairs above, Whitley and Willow push against a giant suit of armor and sword mounted against the rail. Just as the Hound is fully regenerated and preparing to lunge at Penny again, the armor and sword come crashing down on it, killing the creature at last. Ruby falls to her knees in horror. When Weiss asks what the Hound was, Ruby murmurs that it was a person. When the Hound's flesh crumbles into dust, the skeleton of its' Faunus host is left behind.

At first, Whitley appears to have a positive and friendly attitude. He is supportive of Weiss, warning her that her father may be in a foul mood. He also compliments Weiss' strength, and her similarity to Winter in that regard. Though Weiss points out he does not have a good past relationship with Winter, Whitley talks about his eldest sister with respect, something that makes Weiss suspicious of his behavior.

However, Whitley's initial supportive behavior is simply a front, as his demeanor toward Weiss becomes more condescending and antagonistic after she receives the news that she had been disinherited. So far, he emulates his father's disdainful and superior attitude toward others.

When it comes to the roles of Huntsmen, Whitley sees them as barbaric, implying he has no training or any martial skill compared to his sisters.

Since the Glyph Semblance is hereditary in nature and runs in the Schnee Family, it is likely that Whitley has the potential to use it. However, given Whitley's negative views on Huntsmen, it can be assumed he has had no type of training, Aura or martial and no plans to even try to obtain the needed skills.

It can be assumed that due to his tutelage under his father, Whitley is reasonably knowledgeable in the fields of business and political gamesmanship. He is quite cunning and is able to readily read into the deceptions and lies of others.

Whitley has also been taught and trained on how to use the SDC networks and systems and has shown to be skilled enough to be able to create and issue a mass operation to the SDC's cargo ship air fleet and give mass commands to the company's automated drones. 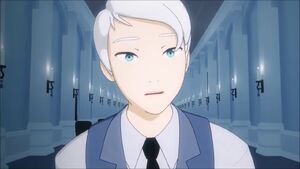 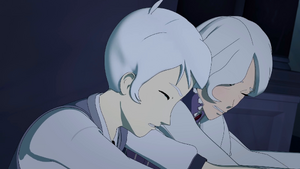