Heroes Wiki
Register
Don't have an account?
Sign In
Advertisement
in: Candidate for Deletion, Ben 10 Heroes, Aliens,
and 17 more

Bestial Alien
Wildmutt is one of Ben Tennyson's Alien Egos from the first Ben 10 Series.

In the Original Series, Wildmutt is a animalistic alien, often compared to a dog or described as being dog-like. He has orange fur, and orange quills on his back, arms and under his mouth. He has dark grey claws on his fingers and toes, pale yellow teeth and black lips. Wildmutt has no eyes, ears, visible nose or a tail. However, he has gill-like organs at the sides of his neck. He wears a black and white brace with the Omnitrix Symbol on his left shoulder. As a 4 year old toddler, Wildmutt is smaller and thinner.

In Ultimate Alien, Wildmutt looks exactity the same, but his lips are now orange instead of black, He now wears the Ultimatrix symbol on his front chest therefore no longer wears the brace on his left shoulder. His ultimate form is a deep red instead of orange, and has a row of pale coloured spikes running along his back. He also has a tail with a spike at the end, similar to a scorpion's stinger.

In Omniverse, Wildmutt's appearance hasn't changed much, but his lips are now black again, his forearms are a bit bigger and he wears a green and white collar with the Omnitrix on his neck.

While not a very commonly used alien, Wildmutt was still useful in many situations, and could always hold his own in a fight, although he has been effectively taken care of multiple times by enemies (When he attacked Charmcaster, she was able to hold him back, and soon sent him falling under the floor by detonating a few mini bombs under him. In a different episode, when he confronted Kevin Levin in a tram, the boy made part of the interior fall onto him, briefly trapping him while he made his escape). 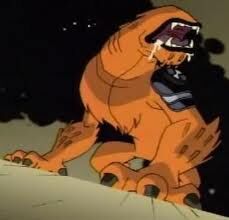 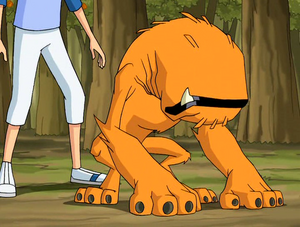 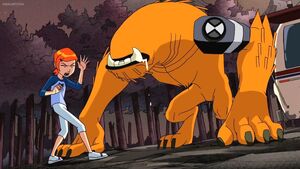 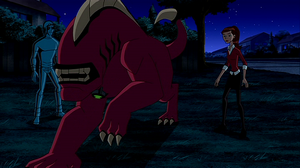 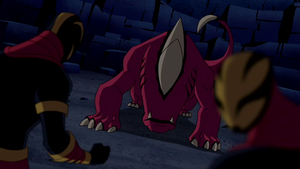 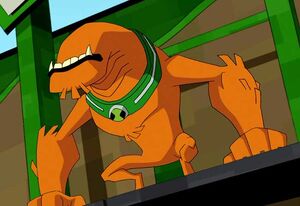