Jakers The Adventures of Piggley Winks

To lead the flock

Shirley, Little Baa, Other members of his flock

Wiley is the husband of Shirley, the father of Little Baa and one of the main characters in Jakers The Adventures of Piggley Winks.

He is a sheep who in the 1950s, was imported from America to Raloo Farm in Ireland where he was the only sheep in the flock to be able to talk (until his wife Shirley in later series) and because of this he makes himself the leader.

He appears in the subplots of the series where it sometimes clashes with the main story as it is shown that the shepherd is the show's protagonist Piggley Winks.

He is voiced by Mel Brooks. 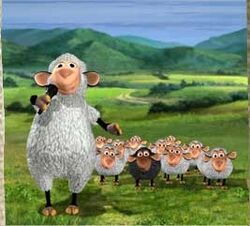 Wiley and his flock.
Add a photo to this gallery
Retrieved from "https://hero.fandom.com/wiki/Wiley?oldid=1580899"
Community content is available under CC-BY-SA unless otherwise noted.