Specialist of Everything, Dancing Princess of Peerless Combatant Skills

Yuji Sakai, Snake of the Festival

Wilhelmina Carmel is one of the main protagonists of the light novel and anime series Shakugan No Shana. She is a Flame Haze who has taken care of Shana ever since she was young. Their relationship is very akin to that of a mother and daughter, although both have trouble expressing this openly. She is bound to the Crimson Lord Tiamat, the Tiara of Illusions and Dreams.

Wilhelmina is a young, beautiful lady of Dutch descent who wears a maid outfit consisting of a purplish dress with puffy sleeves, a white apron and a yellow ribbon tied on her neck. She also wears a petticoat and a pair of knee-high boots. When Yuji Sakai asked her why she chose that outfit, she said she asked around about what outfit befits a person serving royalty, and the maid outfit was the answer. After finding it really practical, she has worn it ever since. The vessel of her contracting Crimson Lord Tiamat assumes the form of a maid's headband.

In the Great War, she wore a long yellow gown.

Having been deeply hurt by the death of her best friend Mathilde and the heartbreak over her unrequited feelings for Merihim, Wilhelmina is very cold, aloof, stoic and pragmatic. She always speaks in a monotone and usually appears to be devoid of emotion, though this has been shown to not be the case on several occasions. She always speaks in an overly formal and polite manner, rarely addressing anyone by name (she even calls Shana "Milady", as though she were actually her maid rather than her guardian) and always using de arimasu, the uncontracted form of desu normally seen only in writing, to end her sentences. This is translated on some subtitles and the English dub as "Indeed".

As her title suggests, Wilhelmina is very skillful in many areas, like singing and house chores, and is the one who took care of Shana during the girl's training at Tendōkyū. Cooking, however, is one of her weaknesses. Because of this, she usually prepares dishes which do not require cooking like instant noodles and pre-prepared dishes. In her attempt to please Shana by cooking food personally for her, she ends up trashing Yuji's mother, Chigusa's kitchen. Wilhelmina is also the reason Shana developed such a fondness for melon bread.

Like most Flame Hazes, Wilhelmina prioritises preserving the balance over protecting innocent lives. When training Shana, she didn't even bother to teach her how to be sociable, partially because she knows very little about it herself and partially because she believed such skills to be unnecessary and distracting for a Flame Haze. It's because of this reason that she attempted to kill Yuji on two occasions, believing he was distracting Shana from her duties, though this was also to prevent the Midnight Lost Child from falling into the hands of Bal-Masqué. She refrained from doing so with Shana's interference, though she is still quite cold to him for a time, similar to how an overprotective mother would dislike her daughter's boyfriend. In the light novels, she even tries to make Shana give up on him by force. Eventually, she is convinced to allow Shana to grow up by Chigusa. Wilhelmina also eventually becomes good friends with Chigusa, to the point that, when she finds out she is ill, she goes out of her way to make a remedy for her in exchange for everything she had done for her and Shana.

Ultimately, while Wilhelmina tries her hardest to raise Shana, the unfortunate truth is that she simply doesn't know how. She can train Shana and provide her with melon bread, but she can't provide Shana with emotional support, she can't cook for her, and she often fails to recognise when she's in pain. She is basically completely unable to help Shana grow as a human being, because she never got a chance to live as one herself. Making matters even worse is the fact that Wilhelmina is well-aware of all of this, and her inability to support Shana when she needs it serves as a constant frustration for her, to the point that she sometimes feels she's done an inadequate job as her guardian, even if Shana herself doesn't see it that way.

Although initially being put off by the idea that she and Shana were 'family', Wilhelmina has shown time and time again that she does indeed love Shana as a mother does her daughter. This is especially shown when Shana makes a surprise dinner for her due to her saying it was a special occasion, the special occasion being the anniversary of the day Shana entered her life. After learning that Shana had managed to escape from her chamber in the Seireiden by herself, Wilhelmina wholeheartedly admits that she is very proud of her, though also a bit saddened that she doesn't need to rely on her anymore.

She is one of the great Flame Haze from the Great War, fighting alongside her friend, Mathilde Saint-Omer against the Crimson Denizen organization known as Töten Glocke. Together, they are considered to be the counterpart of the "Pair of Wings", a partnership between the Crimson Lords Merihim and Illuyanka; two of them were said to be the strongest of Töten Glocke, serving under Asiz, their leader. Wilhelmina fought Illuyanka in many battles but avoided confronting Merihim whom she had feelings for. Wilhelmina is also known as "Dancing Princess of Peerless Combatant Skills" for her elegant and unparalleled techniques and movements in battles.

During the Great War, after fighting Illuyanka and defeating him, she lost her right arm in the later battle with Chernobog but recovered thanks to the Flame Haze's ability. Asiz's attempt to conjure his child (or the "Heir to Both Worlds") from his deceased contractor's and his own existences was thwarted by Mathilde who triumphed over Merihim, cutting his limbs apart. She decided to use Tenpa Jōsai to interrupt Asiz by summoning Alastor to this world. The ceremony took Mathilde's life in the process. Wilhelmina and Merihim were left with Mathilde's final request for her: to search for and train the successor of the title of "Flame-Haired Burning-Eyed Hunter". 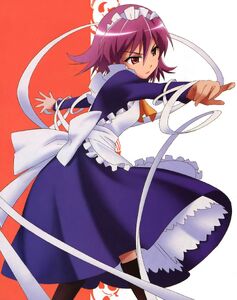 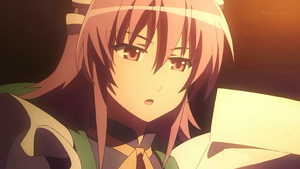 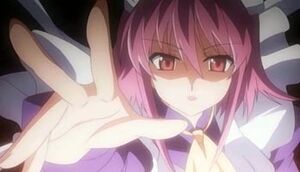 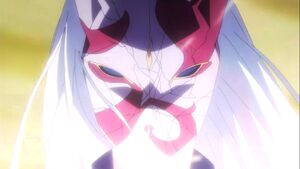 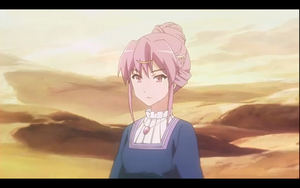 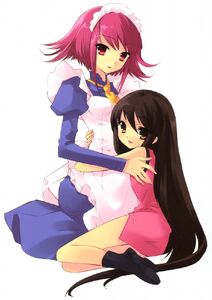 Wilhelmina and Shana
Add a photo to this gallery
Retrieved from "https://hero.fandom.com/wiki/Wilhelmina_Carmel?oldid=1959554"
Community content is available under CC-BY-SA unless otherwise noted.