Practicing with his weapons.

Save himself and Elizabeth.

Get Elizabeth out of jail.
Free his father from the Flying Dutchman.
Marry Elizabeth and reconcile with his father (all succeeded).

He is portrayed by Orlando Bloom, who also portrayed Legolas in Middle Earth and Balian of Ibelin in Kingdom of Heaven.

Will was the only child of William "Bootstrap Bill" Turner. In his life, Will Turner was an accomplished blacksmith by trade, an excellent swordsman by pursuit and a budding pirate by fate. After embarking on several adventures with Captain Jack Sparrow, Will embraced his pirate heritage as he pursued his own purposes in life. Despite Will's best efforts to adhere to the social class structure, he realizes that some rules are meant to be broken.

Born in Glasgow, Scotland, Will was raised by his mother in England and believed his father was a respectable merchant sailor. When his mother died, Will began searching for his father while wearing a gold medallion. Rescued from a burning shipwreck, Will first met Elizabeth Swann aboard the HMS Dauntless. Upon arriving at Port Royal, Will Turner became a blacksmith under John Brown. A simple craftsman, his life revolved around his work, and his distant longing for a woman he knew could never be his wife. After Elizabeth was kidnapped by Hector Barbossa's crew of the Black Pearl, Will joined forces with Captain Jack Sparrow to save her while being pursued by Commodore Norrington's men and facing cursed pirates. Though he was initially shocked and dismayed when Jack revealed that his father was a pirate, Will Turner managed to save Elizabeth. In return for his help, Will aided Jack Sparrow in escaping from the gallows at great risk to his own.

About a year later, Will and Elizabeth were on the verge of marrying when they were arrested by Lord Cutler Beckett of the East India Trading Company for saving Jack Sparrow. Will Turner sets out to retrieve Jack's unique compass in exchange for their freedom. After meeting with Jack on Cannibal Island and visiting the voodoo mystic Tia Dalma, Will Turner was tricked into serving onboard Davy Jones's ship, the Flying Dutchman, where Will met up with his father, Bootstrap Bill. Will promised Bill that he'd try and free him from Jones's servitude, a promise Will saw throughout the search for the Dead Man's Chest and the war against piracy, where he joined a resurrected Barbossa in rescuing Jack Sparrow from Davy Jones' Locker. Despite his best efforts, Will would try and do everything he could to honor that vow, but not forget that he still loved Elizabeth.

During the final battle against Beckett's Armada, Will and Elizabeth were married. Shortly after being stabbed by Jones, Will himself pierced Jones' heart. Because he had killed Jones, Will became the new captain of the Flying Dutchman. After the pirates' victory, Will and Elizabeth spent one day with each other, during which time they conceived a child before Will leaves to serve aboard the Dutchman for ten years.

10 years later, he comes back and meets his son Henry, telling him about his adventures with Jack before leaving again for more 10 tears of duty. However, Henry discovers about the Trident of Poseidon which can break all the curses of the sea including Will's curse. Henry goes to the Dutchman, reuniting with his father. Will tells his son that the Trident of Poseidon doesn't exist and asks Henry to leave him to his fate as he believes that his curse cannot be broken.

9 years later, a teenage Henry meets Jack and a female astronomer named Carina (who is revealed to be Barbossa's daughter) and gets them to help him to find the Trident. Also with the help of Barbossa, they destroyed the Trident, breaking all the curses of the sea including Will's curse. Will's heart returns to his chest as he is no longer the captain of the Flying Dutchman. Thus, Will is finally free from the Dutchman and can live as a mortal. He reunites with Elizabeth and Henry while meeting Carina, who became his son's girlfriend.

However, Davy Jones has been resurrected from the Dutchman as the ship must have a captain, though despite this, he still seems to be trapped in his cursed form (possibly due to the fact that his curse was given to him by Calypso as a punishment for abandoning his duty and not by the sea). Davy Jones appears in Will and Elizabeth's bedroom while they are sleeping, and will possibly seek revenge on them and Jack Sparrow. 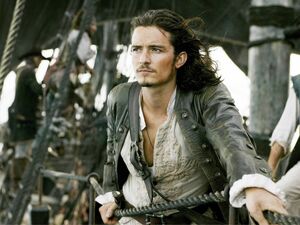 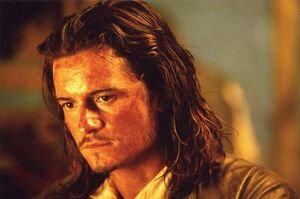 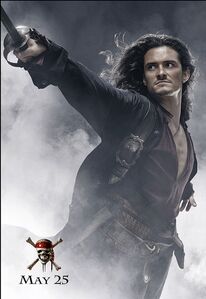 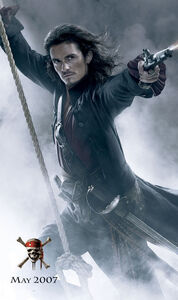 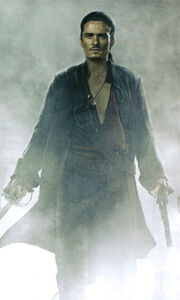 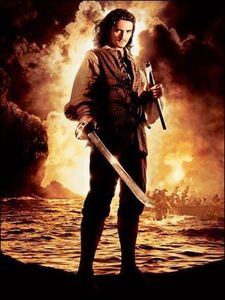 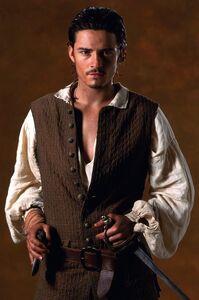 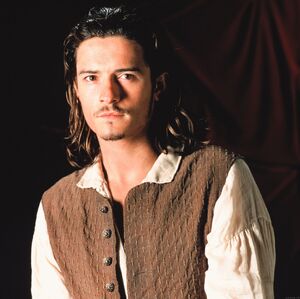 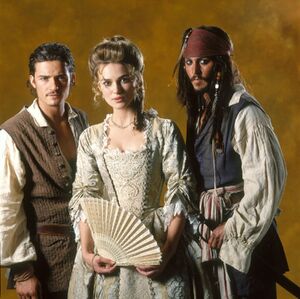 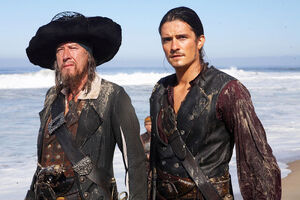 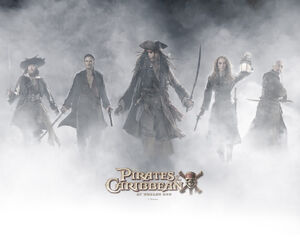 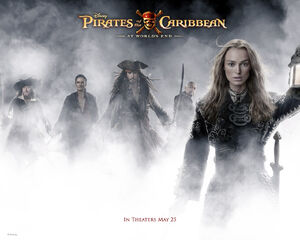 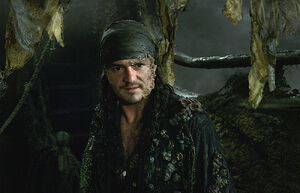 Will confronting his son, Henry aboard The Flying Dutchman.

Will trying to convince his son to not go looking for the Trident of Poseidon or Jack Sparrow.

Will embracing his son.

Will strokes Henry's face before the Dutchman sinks back into the sea.