Being with Anya Oliwa
Aiding the Resistance
Training his twin daughters

Stop Helga and kill the Monstrosity

Kill Deathshead
Kill Frau Irene Engel
Kickstart the Second American Revolution (all succeeded).
Train his daughters
Save the earth from the Nazis (both ongoing).

Matthew Kaminsky voiced B.J. in Return to Castle Wolfenstein, and Peter Jessop did so in 2009's Wolfenstein.

In MachineGames' series, he is voiced by Brian Bloom, who also portrayed Adam "Kane" Marcus in the Kane and Lynch series, Alex Shepherd in Silent Hill: Homecoming, Matt Horner in the Starcraft series, Jackie Estacado in The Darkness 2, Yuri in Call of Duty: Modern Warfare 3, Keegan P. Russ in Call of Duty: Ghosts, and Nick Reyes in Call of Duty: Infinite Warfare.

William Joseph Blazkowicz was born in the United States on August 15, 1911, to a family of Polish immigrants, Rip and Zofia Blazkowicz, and was nicknamed "B.J." by his friends. During World War II, B.J. became a sergeant in the U.S. Army Rangers, before being recruited as the top agent for the United States Office of Secret Actions (OSA), a fictional version of the Office of Strategic Services, who dispatched him to investigate rumors of occult activity by the Third Reich. During his service he was awarded the Medal of Honor, the highest military honor in the United States, and other military decorations.

Blazkowicz got married after the war, at age 40, to Julia Marie Peterson. Their son, Arthur Kenneth Blazkowicz became a television host in Milwaukee, Wisconsin. Being a TV host, Arthur changed his last name to Blaze. Then, he married Susan Elizabeth McMichaels. They had one son, which was named after Arthur's father, William Joseph Blazkowicz II, or as he signed his grade school homework, Billy Blaze. His descendant, Stan Blazkowicz, is one of the heroes of Doom II RPG.

The New Order diverges Blazkowicz's story into an alternate direction, where he suffers from amnesia during a mission to kill Wilhelm "Deathshead" Strasse. Born on the Blazkowicz Estate in 1911, he is the son of Rip and Zofia Blazkowicz. B.J.'s childhood was disturbing, as he alongside his mother and pet dog Bessie were physically abused by Rip. In The New Order, B.J. would recount how his father would put him in the closet when he was bad, and made him go down into their well to get his watch. In his youth, B.J. met and befriended a African-American girl named Billie, and the two had mutual feelings for each other. Rip caught them kissing under the poplar tree, and attacked him despite his mother protecting him.

At an early age, B.J. ran away and joined U.S. Army Rangers, breaking his mother's heart. B.J. would meet and befriend O.S.A. agents Richard Wesley and Pippa Shepherd. In addition, B.J. also befriended R.A.F. Wing Commander Fergus Reid. In The Old Blood, B.J. was part of an O.S.A. mission to collect a folder on Wilhelm Strasse's location, which was being held by Helga Von Schabbs in Castle Wolfenstein. B.J. was eventually successful in collecting the folders, and killing King Otto's Monstrosity in the process. He was rescued by Fergus, and the two traveled to Deathshead's Compound to kill the German scientist.

B.J. and the army would fail to kill Wilhelm Strasse, and he witnesses the death of one of his comrades in the process (Fergus/Wyatt; player-determined). WWII would be won by the Nazis, and B.J. remains in an asylum for over a decade into 1960. Escaping with the head nurse who took care of him, Anya Oliwa, B.J. decided to start a revolution and put an end of the Nazi's war machine. B.J. and Anya succeeded in breaking out B.J.'s old ally (Fergus or Probst Wyatt III), and regroup with the Kreisau Circle in Berlin, run by Caroline Becker. Despite the loss of friends and allies, B.J. succeeds in defeating General Deathshead, but is critically injured when the latter pulls the pin off a grenade. B.J. would order his allies to bomb the castle, but they instead enter the facility to collect a injured Blazkowicz.

In The New Colossus, B.J. is left critically wounded from his battle with Deathshead, but is rescued and taken care of for six months. Frau Irene Engel attacks B.J. and his allies for killing Deathshead and her lover and companion, Hans "Bubi" Winkle. Awakening onboard the Eva's Hammer, B.J. fights his way to Set Roth and Anya in a wheelchair. He surrenders himself to the Nazis to let his friends go, but witnesses Engel kill Caroline, and mock her daughter, Sigrun. Sigrun aids B.J. and Fergus Reid/Probst Wyatt and helps them escape from the Ausmerzer, with Blazkowicz collecting Caroline's power armor for use. Afterward, B.J. becomes seldom and cynical, knowing that he will die soon, he decides to look for allies to help kickstart the revolution so his children can live in a free world.

He would meet his demise after being captured by Frau Engel, being beheaded on live television in Washington. Despite this, his head would be recovered by the resistance, and placed onto a super soldier's body to continue the fight against the Nazis. B.J. successfully gains resistance ally Horton Boone to join the revolution, and goes to Venus to collect the ODIN codes for The Ausmerzer, meeting Adolf Hitler while disguised. The resistance takes over the ship with the aid of Blakzowicz, whom kills Frau Engel on live-television to avenge the deaths of Caroline and Super Spesh. After Horton, Walker or Wyatt make a speech to the people of America, B.J. proposes to Caroline with his mother's ring, which she accepts. Once returning to the ship, B.J. is tasked by Grace to assassinate the Engel's Uber Commanders, which he does (freeing parts of the United States).

In Wolfenstein: Youngblood, he is the mentor of his twin-daughters to fight against the Nazis, but has disappeared in Paris. This leaves his daughters to find him in Paris, donning power suits of their own, and wielding B.J.'s former special weapons to fight against the regime. The twins find B.J. at the end of Lab X, who reveals that after killing Adolf Hitler, the latter created doomsday device that would start the apocalypse. B.J. began to work on finding a way to stop the apocalypse, but states that he saw other worlds with the Da'at Yichud device Set left him. B.J. later supports the twins by fighting off the Fourth Reich soldiers as they battle Lothar Brandt, whom they kill on the roof of the Siegturm.

B.J. Blazkowicz is often depicted as being the most dreaded soldier against the Nazi Party, gaining the notorious nickname "Terror Billy" in The New Colossus. Despite this, he is kind and compassionate, and shows no signs of being racist like his father (e.g. befriending Billie, J, Grace Walker, etc.). B.J. could be somewhat naïve on thinking that Americans would never surrender to the Nazis, and he learned the hard way when seeing everyone following the regime, and eventually lost most of his faith. This is noticeable when asking Jules Redfield was a Nazi, but immediately replies that he can't tell anymore.

Blazkowicz is often portrayed by the Nazis as being as an dimwitted American, but he shows himself to rather intelligent and observant through the stories. He often monologues to himself on the events, and gives rather poetic statements, as shown in The New Colossus when speaking to Caroline after her death. He was also cultured, as he gives a line of William Shakespeare's Hamlet with the skull in Jager's room. His intelligence goes more into his resourcefulness in a situation, escaping from his prison in Castle Wolfenstein by using pipes (and later using them as melee weapons), and later using axes to open crates and get around areas. 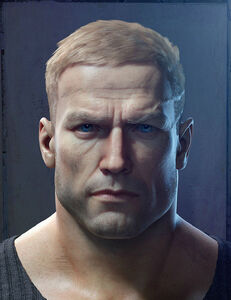 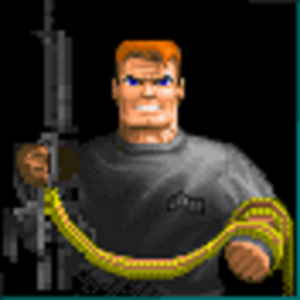 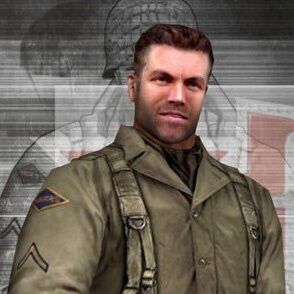 B.J. in Return to Castle Wolfenstein. 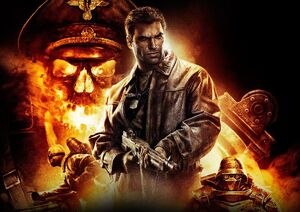 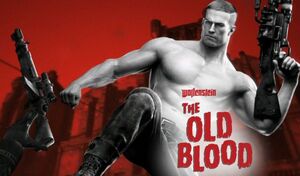 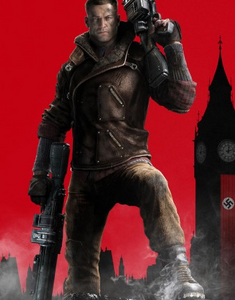 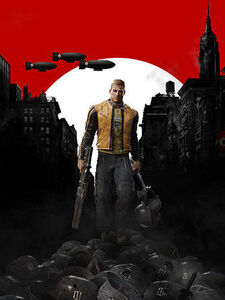 B.J. in The New Colossus. 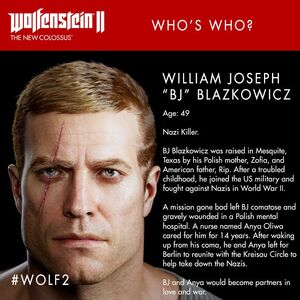 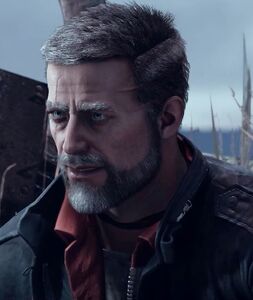 An elder B.J. with his wife, Anya in Youngblood. 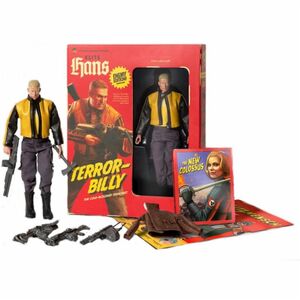 The Terror Billy action figure.
Add a photo to this gallery

Retrieved from "https://hero.fandom.com/wiki/William_%22B.J.%22_Blazkowicz?oldid=2132059"
Community content is available under CC-BY-SA unless otherwise noted.