Student at the University of California

Reading Howl and Other Poems, On the Road, Collected Poems, The Voyage of the Space Beagle, Jack Proton - Space Cop, Worlds in Collision, Dianetics, and Space Brothers: A Guide To Our Galactic Next-Door Neighbors. (possibly)

Playing the songs of Woody Guthrie, Pete Seeger, and Hank Williams, along with original songs.
Drinking.
Writing his diary.

Travel to Alpha Centauri A. (failed)

William ███████ is a character appearing in the article of SCP-1958 set in the universe of the SCP Foundation. He was a member of the Fifth Church and one of the creators of SCP-1958, a modified Volkswagen microbus which he and his friends sought to use to travel through space.

Not much is known about the origin of William. He was a 21 year old student at the University of California during the 50s, and was described as beatnik due to him participating in counterculture circles and left-wing political causes and briefly dabbled with several new religious movements, such as the Transcendental Meditation, the teachings of Indian mystic Meher Baba, and the First Fifth Church of San Francisco. Because of his ideas of going to space because that was what Fifthism was really about he and his friends, Jerry, Susan and Sam were excluded from the Fifth Church for heresy. However, they became determined to go space to prove the Church and various scientists wrong and so together they modified a Volkswagen microbus into a fully functional spaceship, while Jerry calculated the fastest way to travel to the Alpha Centauri A star. They then began preparing themselves for the journey, planning to launch in summer after graduation. When July 4th arrived William and his friends became ready to launch themselves during the fireworks and also decided to take along Susan's pregnant cat Milly.

After launch they were amazed by the beauty of space and waited for their "spaceship" to arrive to Alpha Centauri while consuming their stored food. However, twelve days after launching something bumped with the bus while the group was singing. Jerry thinking what it was space dust decided to don a spacesuit and checked it out, but as he was about to renter something else bumped with the bus again which caused Jerry to lose his grip and float away from them. As Susan and Sam were screaming William tried to redirect the bus, but when finally reaching he had died. They all were heavily impacted by this, especially Susan who was Jerry fiancé and had planned to get married while William would have officialized their union. After three days following Jerry's death Susan was found by William and Sam dead from overdose, and the two remaining friends decided to make some sort of funeral for her, with William playing the song Amazing Grace while Sam ejected her body from the airlock. As days went on the cat also died, but her body was unable to be located by William and Sam, while the two of them became affected with scurvy.

Around August William realized that they were still in the solar system and concluded that Jerry's calculation were wrong, but decided to hide the fact from a sick Sam, not wanting his friend to fall deeper in his despair. On August 23rd Sam eventually asked William if they had arrived and the latter decided to lie to him and said that tomorrow they would be in Alpha Centauri. After that Sam asked William if he could read him And Death Shall Have No Dominion to which William complied. Towards the end of the poem Sam also died which left William to push him out through the airlock and remaining all alone. On November 3rd William added his last entry on his diary stating how the stars were so beautiful before seemingly succumbing to death as well. In the 21st century the SCP Foundation's Lunar Facility 2-A discovered William's microbus along with his skeletal remains near the orbit of Mars, moving away from the sun at a constant velocity of approximately 130 km/h and designated the vehicle SCP-1958. After gathering noteworthy objects the Foundation planned to return SCP-1958 back to Earth when suitable means would be developed.

The true appearance of William is never revealed and there are no details about it.

William was a normal human and possessed no abnormal powers, although he appeared to possess some intellect and deep knowledge on spaceships and space travel. William eventually developed scurvy due to vitamin C deficiency after he had consumed food completely lacking vitamin C.

William was seemingly a stoner beatnik who participated in counterculture circles and left-wing political causes. He also dabbled with several new religious movements, such as the Transcendental Meditation, and the teachings of Indian mystic Meher Baba, before landing on Fifthism. However, his original ideals went against that of the religion and he was excluded from the church, but William and his friends still held strong to his view on Fifthism and were determined to prove it true. William was also shown to deeply love his friends, Jerry, Susan and Sam, hanging and singing together and enjoying their time and became deeply dismayed over the eventual deaths of his friends. Despite his despair William tried to keep some morale and so he decided to spent the remaining of his life marveling at the distant stars.

William and Milly inside SCP-1958. 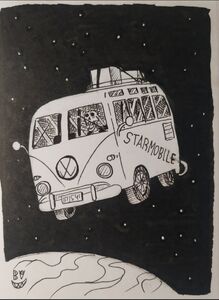 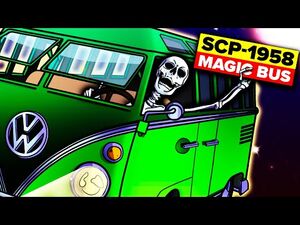