King Edward and his men

William Wallace is the hero of the Oscar-winning 1995 movie Braveheart. He is based off of a warrior of the same name who was lesser-known throughout his native Scotland until the movie came out.

He was portrayed by Mel Gibson, who also directed the movie and also played Martin Riggs in the Lethal Weapon movies, Rocky Rhodes in Chicken Run, Max Rockatansky in the Mad Max trilogy, Graham Hess in Signs, Thomas Craven in Edge of Darkness and John Smith in Pocahontas.

William Wallace (1272? - 1305) was a Scot commoner whose nation was under the thumb of King Edward "Longshanks" I of England. His father did own some land which set the family apart from other commoners. When William was a young boy, his father Malcolm and his older brother John went to a peace summit between Scottish nobles and the English. Unfortunately the meeting was a trap, and all of the Scottish attendees - even the children were hanged. Malcolm and John had arrived late to find the grisly scene, William had followed them and was traumatized when he came and saw all the dead Scots, a memory he would carry for the rest of his life.

Malcolm and John went off to fight against the English, leaving William to tend the farm. They were both killed by the English. Their bodies were recovered by Malcolm's friend Campbell and brought home. After the funeral Malcolm's brother Argyle became William's guardian. William accompanied Argyle on his travels throughout Europe, including Rome.

When he grew up, Wallace was a large, muscular man. whom scholars assumed stood seven feet tall. At the age of twenty-five, he killed an English sheriff who murdered his wife Murron, whom he had married in secret in order to avoid having her raped by an English Lord due to Edward's declaring Prima Nocta for all new Scottish brides.

Wallace went outlaw after his wife's death. He commanded a powerful rebel band and battled the English Armies. It's been said that his greatest victory came at the town of Stirling, where Wallace led a group of spearmen to victory against King Edward's cavalry.

Edward then personally led his army to battle against Wallace in the town of Falkirk. Although the conscripts from Ireland betrayed Longshanks, and fought for the Scots, he hindered Wallace's support from Scottish nobles by bribing noblemen Mornay and Lochlan, allowing him to defeat the Rebels.

William managed to escape death at Falkirk, but seven years later he was captured when the Scottish nobles betrayed him to the English. William was tried, tortured, and put to death by the English. His remains were scattered to the four corners of the British Isles as a warning to other rebels.

Seven years after William's death Robert the Bruce and his army met a larger English army at Bannockburn. The English expected Bruce to kiss their asses as he paid homage to the English throne. Robert the Bruce had other ideas, and said to his army, "You have bled with Wallace! Now bleed with me!" The Bruce and the Scottish army charged the English army, beginning the Battle of Bannockburn. Despite being outnumbered and starving the Scots carried the day, ensuring Scotland remained independent for a few hundred more years. 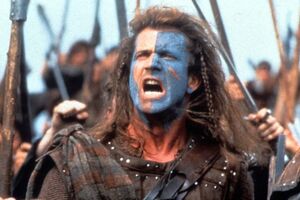 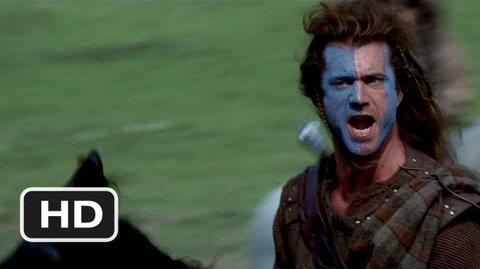