Indiana Jones and the Temple of Doom

Wilhelmina "Willie" Scott is the deuteragonist from Indiana Jones and the Temple of Doom.

She is an American singer working at Club Obi-Wan in Shanghai who is caught up in Indiana's adventures and becomes his love interest in the film.

She was portrayed by Kate Capshaw.

Unlike Marion Ravenwood, Willie is more of a damsel in distress and easily loses patience with Indy. The novelization details Willie was born in Missouri, and moved to Shanghai as she was unable to break into Hollywood during the Great Depression. She also claims to know Al Capone (who Indy met in 1920) and Frank Nitti. She returns to the United States following her adventure.

Willie is a type of person who speaks with her mind where this trait remarked by Indiana being both a pro and a con according to his journal. She displayed fondness for diamonds which further reinforced her great comfort with luxuries to the point of barely, if not downright unable to stand living without them in addition of a fear of insect and great dislike of wild animals. In fact, her time in India showed how much she found herself outside her element and comfort zone, shrieking or fainting every time something frightened her, at times to the dismay of her companions who fared better.

Despite being the least capable companion Indiana Jones ever had as much as annoyance, Willie is not a complete "dead weight" she seemed to be. Although her adventure with the adventurer and Short Round changed her only a little, she did helped the latter freeing children enslaved by the Thuggee cult thus contributed in restoring Mayapore village they stumbled upon earlier. She even fights her fear of extreme height to save Shorty from falling at the rope bridge that connected two cliffs separated by a river full of alligators far below. Willie even has a feisty side to her personality where she makes sarcastic remarks to Indiana and on any dangerous situation she runs into. However, over the course of her adventure with Indiana Jones, Willie manages to overcome some of her fears and loses her snobby personality where she saved Short Round from falling off a rope bridge and laughs when an elephant squirts water at her and Indiana before they are about to share a kiss.

During the adventure, Willie even gained a strong-willed side to her personality where she fought members of the Thuggee and punched one member hard in the face; something that impressed Indiana. All in all, Willie does have a good, caring heart and a sense of selflessness.

Willie singing a Mandarin version of "Anything Goes".

"Anything goes."-Willie finishing her performance.

Willie, Indy, and Shorty sleeping as the pilots abandon the plane.

Arriving at the cockpit, Willie sees that the pilots are gone.

Willie trying to wake up Indy.

Willie managing to wake up Indy.

Willie and Indy trying to take control of the plane.

Willie and Indy discovering that the pilots had drained out the plane's fuel, leaving them at a risk of crashing.

Willie notices how low the plane is getting.

Willie panicking as she sees how close to the mountains the plane is getting to.

Willie about to jump out of the plane with Indy and Short Round.

Willie and her allies having managed to escape the plane by jumping onto a raft.

Willie and her allies skidding through a river. 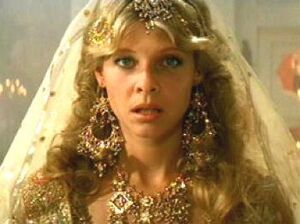 Willie, Indy, and Shorty, seeing the Thuggee bring a prisoner to their temple.

Willie, Shorty, and Indy horrified when Mola Ram rips out the prisoner's heart.

A terrified Willie being comforted by Indy and Short Round.

Willie gasps in horror as the Thuggee sacrifice their prisoner by lowering him into a lava pit.

Willie Scott is being lowered to the Lava by the Thuggee cult.