Listening to the Golden Harp's music.

Keep the Golden Harp prisoner for her own music without interference from Mickey, Donald, and Goofy (formerly).

Giant, Brute, Villain turned to the Good Side

Willie the Giant was the main antagonist in Mickey and The Beanstalk, the second half from Disney's 9th full-length animated feature film, Fun and Fancy Free. He later becomes friends with Mickey and Friends and becomes a protagonist. An example like that is in Mickey Mouse Clubhouse.

He is incredibly powerful, demonstrating amazing magic powers such as flight, invisibility and shape-shifting. Despite this, he is very childish and not considered very bright, given his fondness for toys and inability to pronounce certain words, such as pistachio. His favorite food is implied to be Chocolate Pot Roast with Pistachio, given his overweight appearance. At one time in Mickey Mouse Clubhouse when Donald had his chicken stolen by him, Mickey, Goofy and Donald climb up the Beanstalk again to find out who did it while Minnie and Pluto stayed behind at the Clubhouse.

In the segment, Willie kidnaps the beloved Golden Harp whose beautiful singing brings joy and peace to the kingdom she inhabits. After her kidnapping, the kingdom fell into despair. One night, peasant Mickey Mouse purchases three beans that are said to be magic. Over night, the beans grow into a beanstalk carrying Mickey and his friends Donald and Goofy, to the top of the clouds where Willie dwells. They make way for his castle where they discover the captive harp.

Unfortunately, they are discovered by Willie who imprisons them and locks them in a chess. Mickey Mouse manages to swipe the key and free his friends and the harp. Willie awakens and pursues the heroes. Mickey and his friends make it down the beanstalk and quickly chops it down. Willie falls down to the earth and is defeated in the main story.

However, in the epilogue of Fun and Fancy Free, and the television broadcast of the segment, Willie is seen after the fall looking for Mickey possibly for revenge.

In the film, he is portrayed as the Ghost of Christmas Present. In this depiction, although still bumbling and lacking in intelligence, he is good. He shows Uncle Scrooge the meaning of generosity and warns that there may be trouble ahead for the Cratchit family, and ultimately Scrooge himself. He vanishes suddenly and completely, leaving only his giant footprints in the snow.

It should also be noted that originally, Present was actually going to be played by the Blue Fairy instead of him. In either case, Present is the only 'human' character in the film.

Willie can be spotted as a poster in a movie theater in Toontown.

Willie made several appearances in House of Mouse usually as one-line gags. In "House of Genius", Mickey was kicked into Willie's salad with the giant stating "Duh, I asked for house dressing, not mouse dressing." In "House of Scrooge", Scrooge McDuck cuts back on food service in the club presenting a simple pea as Willie's evening meal, much to Willie's disappointment. In "The Mouse Who Came to Dinner", Willie's amusement to the jokes on Mortimer Mouse has him accidentally slap him to a wall although the audience was quite pleased by the action.

Willie plays a recurring role in the series, now residing on a farm. He is first seen in the episode "Donald and the Beanstalk" where he trades three magic beans for Donald's beloved pet, Boo-Boo Chicken. Eventually, Donald regrets the trade and throws the beans in frustration. This creates the beanstalk. Mickey, Donald and Goofy climb it to find the barn on Willie the Giant, who they fear. They find Boo-Boo Chicken and begin to make there way back home. Willie follows behind to get the chicken back. Mickey decides to trade a stuffed bear for the chicken which Willie happily accepts. Willie would later show up regularly as a friend to Mickey.

Despite his humbling persona, Pete still holds a great fear of Willie unlike the rest of the clubhouse gang. He has also mentioned the fact that he has a mother and visits her often.

The Giant appeared in Once Upon a Time, as Anton, played one of the stars from Lost, Jorge Garcia. When Emma Swan and Hook climb the bean to get back the magic compass allowing them to return to StoryBrooke, supposing that the Giants are switched, they are faced with Anton. However, contrary to his contemporaries, Anton is of a big curiosity to the human beings and gives the compass to Emma.

He is later kidnapped by Hook and Cora who uses him to terrorize the city and kill Snow White and The Prince James whom Anton confuses with his twin brother. By the past, This last, assisted by his lover, Jacqueline "Jack" had manipulated the giant to steal him the magic beans and killed all his family.

When the truth is restored, Anton takes a human size and is nicknamed Tiny and adopted as a brother by Grumpy and the other dwarfs, cultivating with them fields of magic beans.

Willie makes an appearance in the Sir Mickey's shops in the Magic Kingdom and Disneyland Paris parks, lifting part of the roof and peeking inside. Willie also has his own spell card called "The Giant's Giant Stomp" in the attraction Sorcerers of the Magic Kingdom.

Despite his childish mind, Willie is a surprisingly powerful user of magic, claiming all he needs to do is chant a spell Fee-Fi-Fo-Fum, and he can perform shapeshifting, fly, and become invisible. His very first appearance (as a semi- humanoid thunderstorm) indicates that he is more a force of nature than a being, explaining his somewhat abnormal playfullness.

But, even aside from his magical powers, Willie is a powerful physical force, owing to his size and strength.

Still, Willie is not invincible. He has his weaknesses, one of which is implied that he is subject to the limitations of the forms he takes, such as when Mickey had planned to swat him when he'd tried to get Willie to turn himself into a fly. And, of course, Willie isn't all that smart, but he is able to realize when he's been tricked, or almost tricked, so he's not stupid.

However, in his later appearances, Willie has not demonstrated his powers, despite using "Fee-Fi-Fo-Fum", implying that the magic he once had is gone. Whether or not this resulted from his defeat at Mickey's hands is unknown. 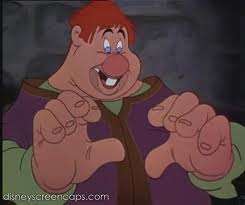 Retrieved from "https://hero.fandom.com/wiki/Willie_the_Giant?oldid=1256001"
Community content is available under CC-BY-SA unless otherwise noted.