Save the eggs
Protect Golden Island

Willow is one of the supporting protagonists in the Rovio video game, Angry Birds Stella. She is based on a blue-backed grosbeak.

Willow has multiple hidden tufts of colorful hair underneath her hat which is only shown during animation. She has 4 strands of blue hair, 2 on each side of her torso, and is always seen wearing a hat. She has light blue breast feathers and dark blue rings around her eyes. Her pupils are maroon red and has square-ish eyelashes.

Willow is very artistic and loves to daydream. Unfortunately she has grand ideas but cannot always follow through. It aggravates her to see someone destroying her habitat. She is a free spirit but is the shyest of the group. She also feels safest when wearing a large, over sized hat, which she tends to hide under. She sometimes holds back her feelings aside from when pigs are around. She hates it when someone disturbs her when she has a creative art session. Willow appears to be the least daredevil-like of the group; as seen in one of her character sketches, she is dragging Stella by her tail, possibly to stop her from getting into a fight; and the promotional art, she has a shocked look when she sees Luca leaning above the edge of the tree branch.

She has a few insecurities, such as the fact that she has multiple colorful feathers on her head that she covers with her hat due to embarrassment. She is confident and friendly, and stands up for what she believes in. She is loyal to even the newest of friends, shown by her support for Artist Pig.

She is kind-hearted and not one who believes in being control of others, as the golden egg's manipulative powers has no affect on her as it does to Dahlia.

Her power is similar to Hal's ability, but is handled differently. When the screen is tapped and held down, Willow slows down and proceeds to spin. As the screen is held, Willow rotates counter-clockwise. Releasing the screen will cause her to shoot herself in the direction she is facing, drilling through objects before stopping.

"GET YOUR CREATIVE ON!"

Willow's a dreamer, a lover not a hater and she's the artist of the flock. She lives in her own "Willow World" and dreams big! Willow likes big hats - and she can be a bit shy so they're great to hide beneath!

It ruffles her feathers to see those pigs behaving badly and destroying their natural habitat while they search of for the Golden Egg. However, she has a pretty cool trick that she plays on them - she creates artistic images that can fool dumb pigs any day of the week!

Willow cares a lot about the environment and she often talks with the strange critters that live on Golden Island to get a sense of what's really happening there.

FAVOURITE MODES OF TRANSPORT: Her imagination!

FAB FACT: A WILLOW IS A TYPE OF TREE THAT HAS SOME HELPFUL MEDICAL PROPERTIES - IT'S EVEN USED TO MAKE ASPIRIN!

Stella is one of Willow's best friends. In Own The Sky, when Stella is traumatized over her flight experience and ruins Willow's painting, she does not get angry and instead is visibly concerned for her, and creates a plan to help overcome her fear.

Willow also comforts Stella along with the other characters after Stella sees who Gale really is in Bad Princess.

She additionally appears in Stella's birthday party and urges Stella to dance with Gale.

Luca is seen to Willow as a younger brother, and she adores him. When they think that he is sleeping in The Runaway, Willow can't help but utter. When they find out that he is missing, Willow partakes in the search for him and is as worried as the rest of the flock. In the first episode of the series, Willow is also seen showing Luca her painting.

Willow and Poppy are best friends. While Willow is sick of Poppy's constant pranks and tricks, she is still friends with her and goes camping with her and Dahlia. They enjoy playing in the band together, but Willow dislikes when Poppy gets too carried away with her music playing.

Dahlia is one of Willow's best friends. They are often seen together and are always standing/sitting next to each other in multiple scenes of the Animation Series. They additionally go camping together.

Gale is one of Willow's former best friends. Their relationship isn't as explored, but Willow may not hold as much of a grudge against her as the other flock members due to her personality.

Gale knows Willow's insecurity and goes as far to use it against her in order to have what she wants.

While their relationship is only explored in one episode, The Portrait, Willow and Artist Pig are very good friends. Willow is only helpful to him and only helps him improve on his skills. When Gale snaps his own brush in half, Willow gives Artist Pig her own and even ruins Gale's painting by painting a snout on it to get even with her. In Premonition, Willow is glad to see Artist Pig and teaches him how to befriend the Critters. She is seen going through enough trouble in pushing Artist Pig's body all the way to the tree house after he was turned into a stone sculpture. 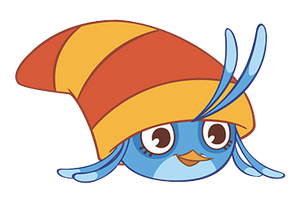 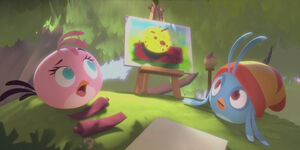 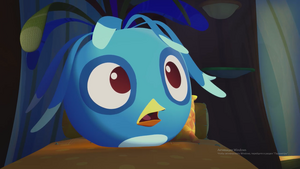