Hanging out with her friends, Buffy, Xander and Giles.
Eating and watching TV.
Computer hacking.
Being loyal to the Scooby gang and Buffy.

Used to be a shy geek and an outsider and found a new purpose in life when Xander and her find out Buffy's secret as a slayer and both of them join the Scooby gang.

Willow Rosenberg is a main character and one of the many protagonists from Buffy the Vampire Slayer (1997-2003).

She was portrayed by Alyson Hannigan, who also played Michelle Flaherty in the American Pie series, and Lily Aldrin in How I met your Mother.

Willow plays an integral role within the inner circle of friends - called the Scooby Gang - who support Buffy Summers, a teenager gifted with superhuman powers to defeat vampires, demons, and other evil in the fictional town of Sunnydale. The series begins as Buffy, Willow, and their friend Xander are in 10th grade and Willow is a shy and nerdy girl with little confidence.

She has inherent magical abilities and begins to study witchcraft; as the series progresses, Willow becomes more sure of herself and her magical powers become significant if inconsistent. Her dependence on magic becomes so consuming that it develops into a dark force that takes her on a redemptive journey in a major story arc when she becomes the sixth season's main villain, threatening to destroy the world in a fit of grief and rage. 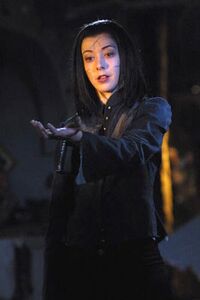 Dark Willow.
Add a photo to this gallery

Retrieved from "https://hero.fandom.com/wiki/Willow_Rosenberg?oldid=1747834"
Community content is available under CC-BY-SA unless otherwise noted.