Peck (by Madmartigan, The Brownies & Queen Bavmorda)
Ufgood (by Burglekutt)

Magic.
Helping others.
Spending time with Madmartigan, Sorsha, and his family.

Save Madmartigan from Llug (succeeded).

Willow Ufgood is titular main protagonist of the 1988 sword and sorcery fantasy film, Willow and its arcade game adaption and video game adaption. He is a reluctant Nelwyn dwarf and aspiring sorcerer who plays a critical role in protecting the special infant Elora Danan from the evil queen Bavmorda.

He was portrayed by Warwick Davis who also played Wicket W. Warrick from Return of the Jedi, Wald, from The Phantom Menace, the evil Leprechaun in the Leprechaun movie series, and Filius Flitwick from the Harry Potter film series.

Fearful of a prophecy stating that a girl child will be born to bring about her downfall, the evil Queen Bavmorda imprisons all pregnant women within her realm, the formidable stronghold of Nockmaar. The child, Elora Danan, is born in the Nockmaar dungeons and identified as the prophesied child by a birthmark on her arm.

Before the dark sorceress arrives to claim the child, Elora's mother convinces her reluctant midwife to escape with the baby. Bavmorda sends her daughter Sorsha and General Kael, the leader of her army, after the midwife to retrieve Elora. After a long pursuit, Nockmaar hounds finally catch up with the midwife. Knowing she can't escape, she puts the baby on a makeshift raft and sends it downstream, trusting fate to run its course, just before she is caught and torn apart by the hounds. The child washes up on shore near a village inhabited by a race of dwarf-like people called Nelwyns (derisively called "pecks" by humans) and is found by the children of Willow Ufgood, a farmer and amateur conjurer. Willow is at first reluctant to take in the baby, but eventually comes to care for her.

The next day, Willow and his children attend a celebration in their village and Willow takes part in a 'test of magic' to become the apprentice to the village's wizard. During the celebration, a Nockmaar hound that was tracking the baby attacks the village. Once the cause of the attack is found, Willow is chosen by the town council to return the child to the world of the "large people," or Daikini (humans). The first Daikini that Willow comes upon is a boastful warrior named Madmartigan, being held captive in a "crow's cage" by the side of the road for theft. Seeing a way to escape his cage, Madmartigan offers to take care of the baby. During their interaction, they meet the retreating army of the kingdom of Galladoorn, which was recently destroyed by Bavmorda, under the leadership of Madmartigan's old friend Airk Thaughbaer, an officer in the army. Willow entrusts the baby to Madmartigan, but on his way home, Willow is attacked by a clan of brownies, who stole the baby from Madmartigan. Willow is taken to the fairy queen of the forest, Cherlindrea, who tells him that the baby, Elora Danan, has chosen Willow to be her guardian. She gives Willow her magic wand and commissions him to find the sorceress Fin Raziel, with two of her brownies, Franjean and Rool, acting as his guides. Along the way, they bump into Madmartigan again, who helps them escape from Sorsha.

Willow and the rest of the group finally meet Fin Raziel, only to find that the sorceress has been turned into a possum by Bavmorda. Soon afterwards Sorsha captures Willow and the others, and they start the long trek to Nockmaar castle. In a mountain camp, Willow attempts to use magic to turn Fin Raziel back into her human form, but transforms her into a Rook instead. Franjean and Rool cause further mayhem when they accidentally expose Madmartigan to a fairy love dust they are carrying, which makes him become infatuated with Sorsha, but eventually they manage to escape.

The group arrives at the castle of Tir Asleen, which has been put under Bavmorda's spell; all its inhabitants are frozen in ice. Madmartigan, refusing to give up hope, prepares for Sorsha's attack while Willow once again fails to transform Raziel into human form, this time turning her into a goat. Sorsha, Kael, and their army arrive and give battle. Willow encounters a few trolls, and after a botched magic spell, transforms one into a two-headed dragon. Luckily, the remnants of the Army of Galladoorn arrive just in time to help their friends. Amidst the melee, Sorsha finally realizes her love for Madmartigan. Kael, however, seizes Elora and takes her to Nockmaar.

The heroes set up camp at Nockmaar, preparing to storm the castle in a final attempt to rescue Elora. Bavmorda turns all the soldiers into pigs, but Raziel teaches Willow how to protect himself from the spell. Willow finally returns Raziel to human form, and the sorceress is able to transform the soldiers back to people. Since Nockmaar's walls seem impenetrable, all despair until Willow proposes a trick to get them inside. In the morning, Raziel and Willow alone provoke the Nockmaar army into attacking them. As the Nockmaar army abandons the security of the castle, Airk's army comes out of hiding from under tents and pits, ambushing them and gaining access to the castle.

While Madmartigan, Airk, and his soldiers battle Kael and the Nockmaar army in the courtyard, Willow, Raziel and Sorsha ascend the castle's main tower trying to locate Elora. They find Bavmorda in the process of initiating an evil ritual that will banish Elora's body and soul to a nether-realm. Below, Kael kills Airk, then engages Madmartigan in a lengthy battle, which ends with Madmartigan killing the General. After a lengthy magical battle between Raziel and Bavmorda, Willow, using his sleight-of-hand trick, saves Elora and causes Bavmorda to get caught in her own ritual, banishing her own body and soul. Willow leaves the baby in the care of Madmartigan and Sorsha and returns home to his beloved family with a special gift: a spellbook from Raziel, which helps him develop his own magical abilities. 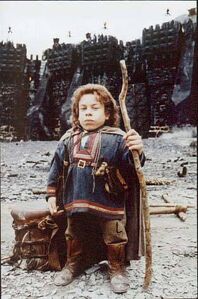 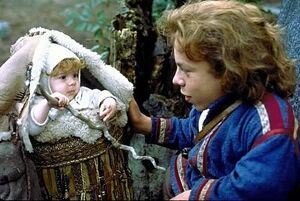 Willow with a fairy. 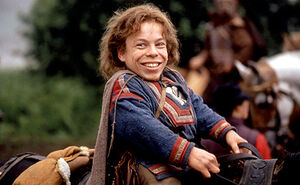