Helping those in needs

To convince Hathi to help Bagheera in finding Mowgli (succeeded)

Supporting Character
Winifred is an elephant who appears in Disney's 1967 film The Jungle Book. She is the wife of Colonel Hathi.

In the original film, she was voiced by the late Verna Felton, who previously voiced Mrs. Jumbo and the Elephant Matriarch in Dumbo, the Fairy Godmother in Cinderella, the Queen of Hearts in Alice in Wonderland, Aunt Sarah in Lady and the Tramp, and Flora and Queen Leah in Sleeping Beauty. In the prequel TV Seies Jungle Cubs, she was voiced by Kath Soucie, who also voiced the Bimbettes in Beauty and the Beast, and Kanga from 2000 to 2010.

Winifred is a female Indian Elephant. She is Colonel Hathi's wife and a member of the jungle patrol. Unlike many mothers seen in Disney films, Winifred is snarky and sarcastic, never hesitating to remind Hathi of his faults. However, she is shown to be caring for others, caring enough for the lost Mowgli's welfare that she is willing to convince her husband to initiate a search party for the man-cub. Together, she and her husband have one son, Hathi, Jr., who comes to be friends with Mowgli.

Winifred's appearances are during the two Jungle Patrol scenes in the film. She first appears marching behind Hathi most of the time. However, upon stopping, she complains to another elephant about how her feet are aching. She participates in the inspection and is reprimanded for her back legs not being straight.

When Hathi and his patrol leave, Winifred asks him if he hadn't forgotten anything. Though Hathi insists that he never forgets, Winifred notes that he has forgotten their son. Hathi orders an immediate about face as he goes to scold his son for not leaving with the group, but the herd, still marching, crashed into them.

Winifred later appears when Bagheera stops the herd in order to seek their help in finding Mowgli, who ran away. Hathi initially refuses, angering Winifred into breaking ranks in order to set him straight. She calls Hathi a "pompous old windbag", and compares Mowgli to their own son, whom Hathi would most certainly search for if lost. She threatens to overthrow Hathi and take over command if Hathi refuses to help in the search, much to Hathi's shock and disbelief. However, this, combined with an appeal from their son, convinces Hathi to help. Winifred is not seen individually after this, but it can be assumed she assisted the herd in the search.

While Winifred doesn't appear in The Jungle Book 2, fans believe that she might be among the herd when they form a line to prevent Baloo from going to the Man Village as well as when the herd stampedes into a cave to avoid the humans who have entered the jungle to search for Mowgli. Like the rest of her family, she does not appear for the rest of the film after that.

Winifred appears as a supporting character in the prequel TV Series Jungle Cubs, where she meets Hathi and the other cubs. She was a young domesticated elephant who was separated from her herd by a fire. In a lead up to the first film, the young Hathi develops a crush on her. Like her son, she is shown to have a mop of brown hair when she was a child. She appears only twice in both seasons and in the second season, her hair is a darker brown color and more clean. 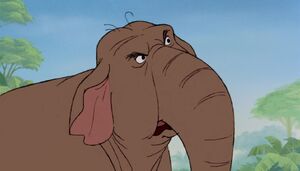 Winifred in The Jungle Book 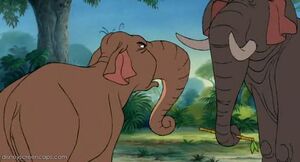 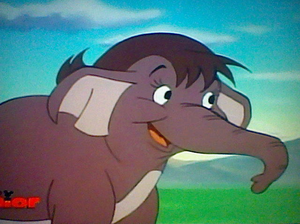 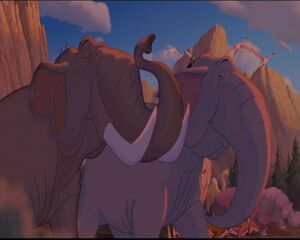 Winifred and Hathi's cameo in Fantasia 2000