Amphibian sidekick
Winky the Frog is a supporting character from Donkey Kong Country.

Winky is a green frog with red spots and two eyes.

Winky first appears in Super Smash Bros. for Wii U as an collectionable trophy. In Super Smash Bros. Ultimate, Winky appears as an novice-ranked support spirit who increases the user's foot attacks. His spirit battle is against green Greninja with increased jump power on the Mushroom Kingdom U.

In Mario + Rabbids Kingdom Battle, the Croaker Disposer color is based of the color scheme of Winky. 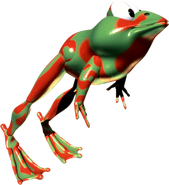 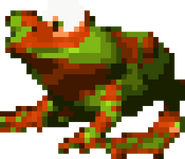