Look after Jenny, Oliver and Georgette

butler
Winston is a supporting character from Disney's 1988 movie, Oliver & Company. He is the Foxworth family's butler who is in charge of Jenny while her parents are away.

Winston is Jenny's family's butler, their driver (earlier in the film), their spoiled poodle, Georgette's (and soon, their cat, Oliver's) caretaker, and is in charge of Jenny while her parents are away. He speaks with a British accent, suggesting that he's an English butler. He is loyal, caring, proper, and understanding.

Winston dresses like a regular butler and wears a tuxedo with a driver's black hat, though he is seen wearing a blue apron throughout the rest of the film.

Winston is first seen driving Jenny home from school in a limousine. When Jenny reads the letter her mother wrote saying that she and her father will not make it home from their business trip in time for her birthday, Winston attempts to comfort her, insisting that they will do so in time, but to no avail.

As part of a scheme, Einstein bumps into the limousine's way, and Francis plays dead, making it look like Winston has hit him as a distraction. He feels guilty and hopefully tries to coax Francis to move while Tito and Oliver are stealing the limousine's radio; mostly Tito. When Oliver accidentally causes the controls to go haywire, Winston is licked goodbye by Francis and then, rushes to see that Jenny is safe and finds that she has found Oliver.

Once they arrive home, Winston is against the idea of Jenny adopting Oliver because her parents left him responsible for her, they have a dog; a poodle named Georgette, and they have to wait for her parents' approval. Then, Winston wakes up Georgette. In the kitchen, Oliver has a special meal prepared by Jenny, who has made a mess in the kitchen while preparing it, which annoys Winston a bit. After receiving a phone call from her parents, Jenny is given permission to keep Oliver. Before Jenny could speak with them, Winston assures them that all's well and when he notices Georgette heading for the kitchen, where Oliver is, he tries to warn her not to go in there, but she ignores him.

He is later heard reminding Jenny to practice the piano, which she does. After Jenny spends most of the rest of the day with Oliver at Central Park and later buys him stuff with his name on them, while singing "Good Company," and then, at night, saying: "Good night, Oliver." and going to sleep, Winston is seen turning off the light in her room and closing the door with a heartwarming smile on his face.

The next day, while Jenny's at school, Fagin's dogs try to "rescue" Oliver. When they see Winston banging on something with a rolling pin, they think he's "torturing" Oliver. Winston, who is watching a wrestling match on TV (one of his hobbies) is angry that his favorite champion is losing, and tricked again by Francis and left locked outside (at first, by Einstein who was ringing the doorbell). At last, he is able to get back inside through an open window only to find a mess made by the gang in the kitchen. Then, he checks to see if Georgette is alright after being called by her countless times. In her room, he notices something weird like the two large things (Einstein and Francis) hiding under her bed cover with half of her body sticking out, the two unusual dog statue replicas (Dodger and Rita) posing as them, and Tito (unseen) hanging on a coat hanger hung on the door nevertheless, he leaves. He is then heard calling Georgette again when she's helping the gang with Oliver's "rescue" and convincing them to take him back to their place since she's eager to get rid of him.

At night, Winston is later heard speaking on the phone with Sykes about a ransom after he had kidnapped Jenny and about trying to get in touch with her parents.

The next day, after Jenny's rescue last night and the villains' (Sykes, Roscoe, and DeSoto's) elimination, Winston is seen celebrating Jenny's eighth birthday with the gang, singing "Happy Birthday" with Fagin, and then, he reminds her to make a wish. Then, he is seen making a bet with Fagin while watching another wrestling match. When the phone rings, Winston answers it and tells Fagin to keep his voice down. It turns out to be Jenny's parents calling from Rome, saying they'll be back the next day, apparently earlier than expected, probably as an unexpected beautiful surprise for Jenny. He is delighted by the news and tends to help them keep it as a surprise for her. After hanging up, he puts his mind back into the game. When Fagin loses his bet, Winston asks him for his ten-spot he owes him but he can't pay up, so he sidles out of the mansion, uses the time to leave as an excuse, grabbing an apple on his way before driving off with the dogs. "Indeed," says Winston suspiciously. After the gang gives Jenny her birthday gifts, Winston reminds her if she's forgetting something, only for her to say thank you to everyone for the gifts, which she does in the end.

Outside the mansion, after Fagin starts up his scooter, Winston gets smudged by its smoke. He is last seen with Jenny and Oliver saying their goodbyes and seeing Fagin and the gang, singing "Why Should I Worry" reprise, heading back home while saying: "What a delightful scoundrel." 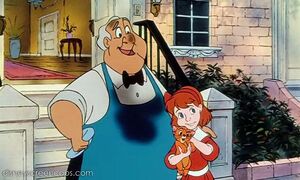 Winston's Last Apparence
Add a photo to this gallery

Retrieved from "https://hero.fandom.com/wiki/Winston_(Oliver_%26_Company)?oldid=2060371"
Community content is available under CC-BY-SA unless otherwise noted.