Winston Deavor is a major character from Pixar's Incredibles 2. He is the head of a world-class telecommunications company alongside his genius sister, Evelyn Deavor.

He was voiced by Bob Odenkirk in his first heroic role.

Winston is determined and confident in what he does. He is a brilliant businessman, and his suavity and charm makes him brilliant at connecting with people. He also seems to be very cosmopolitan, seeing that he convinced Supers from all over the world to leave their old life and join him in his cause. He truly believes that he can use his wealth and power to make the world a better place for everyone.

Despite his enormous amounts of wealth and business connections, Winston seems to be down-to-earth and is able to sympathize with the Supers. Although at first, it seemed that he had some other nefarious — and hidden agenda that is secretly motivating him — this was proven not the case. His sister, Evelyn, revealed that she kept her "Screenslaver" identity a secret because she knew that Winston's strong morals would never permit him to go along with her unscrupulous ways.

He later demonstrates this morality when, upon realizing his sister's true intentions, he refuses to escape with her, despite her being the only family left for him. Deciding to reboard the ship that will crash into the city, he risks his life to try and free all the Supers and ambassadors from Evelyn's technological hypnosis, all by himself, and get them to safety, greatly showing a selfless side to his personality. Presumably, Winston also later explains his sister's activities regarding this crisis to the authorities to ensure her arrest and that the Supers are properly credited for their resolution.

Winston's parents were big supporters of superheroes. His father was good friends with the heroes Gazerbeam and Fironic, and possessed special phones that acted as direct lines to them in case of emergency, which he loved showing off to the family's friends and associates during parties. Not long after Supers were banned, which was triggered by Oliver Sansweet when he sued Mr. Incredible for ruining his suicide, a pair of robbers broke into the Deavor mansion. Winston, his sister Evelyn, and their mother hurried to the safe room while their father headed to his direct lines to call for help, but received no answer. The robbers discovered the Deavor patriarch and shot him. Winston's mother died a few months later from a broken heart.

Winston always believed that if the Supers had been allowed to continue to help people, his father would still be alive, so, when he and his sister inherited the company, they continued their father's support and decided to take it to the next level, kicking off a campaign to help the Supers' cause. Since the government shut down the program that helps Supers, the time was right for the Deavors to step in.

Ultra-wealthy, savvy and suave, Winston goes big in everything he does, including his plan to bring back superheroes. All he needs is a hero (or three) to help him change public perception and eventually make them legal again. His reason for choosing Elastigirl to lead the campaign was because she tends to solve crimes with far less damage than her husband, based on cost-benefit analysis by his sister.

Winston believes that the Super-banning law is what kept Supers from coming to his parents' aid, and from stopping the robbers that had broken into their home and killed his father, if they were allowed to go on patrol, answer calls of help and to do their job. Not long afterwards, his mother would die of heartbreak as a result, which is why he set himself the task to make them legal again; so no one else would go through what he and his sister have.

Winston first appears during the beginning of the film where he notices the Parr family and Frozone preparing to stop the Underminer's machine from reaching the Town Hall in which the superheroes were unable to stop the out-of-control machine and causing damage towards the Town Hall. After the Superhero Relocation Program is shut down, Frozone, Elastigirl and Mr. Incredible encounter Winston at DevTech. Meeting him, Winston then explains that after the city of Municiberg has no superheroes for years, he plans to bring back the superheroes to Municiberg so that they can regain their legal status. When Winston plans to do so, he brings Elastigirl to the city of New Urbem where she stops a newly-opened train being controlled by the Screenslaver. He is later seen along with the Ambassador and her daughter Evelyn during the scene where Elastigirl is ready to be interviewed about rescuing the passengers from the train, in which the interview is suddenly taken over by the fake Screenslaver.

Later when Elastigirl captures the fake Screenslaver, Winston then celebrates Elastigirl's capture and plans to bring DevTech on a luxurious ship where the supers would regain their legal status. When Elastigirl, Frozone, and Mr. Incredible are brainwashed with Hypno-goggles along with the other superheroes and after Dash, Violet, and Jack-Jack get rid of the Hypno-goggles, Winston suddenly confronts his sister Evelyn for betraying him about making superheroes legal. Later after Elastigirl captures Evelyn when she escapes and when Evelyn gets arrested for her crimes, Winston makes all the Supers legal once more, making the superheroes regain their legal statuses, thus undoing Oliver Sansweet's actions. 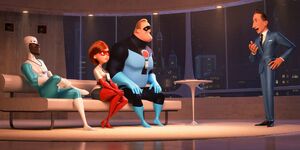 Winston and Evelyn monitoring Elastigirl on her first mission.

Winston and Evelyn communicating with Elastigirl as she watches the grand opening of New Urbem's new runaway train.

Winston with his sister, Evelyn Deavor