Specialist in the Atlesian Military

Huntress
Leader of the Ace Operatives
The Winter Maiden

Winter Schnee is a major character from the American animated webseries RWBY. She is a Specialist in the Atlesian Military, and the elder sister of Weiss and Whitley Schnee. She later takes over as the leader of the Ace Operatives, succeeding Clover Ebi after his death, and also later becomes the Winter Maiden, succeeding Penny Polendina after her death.

She is voiced by Elizabeth Maxwell in the English version, who also voiced Ymir in the English dub of Attack on Titan, Nikki in Camp Camp, Skout in Nomad of Nowhere, and Phoebe in Battleborn.

Winter Schnee is Jacques Schnee's eldest child and is Weiss Schnee's and Whitley Schnee's elder sister. She also appears to be a former student of Atlas Academy, a member of the Atlesian military's Special Operatives unit and a subordinate of General James Ironwood. When she arrives at Beacon Academy, she says that it's "been a long time", implying she is familiar with the school and has visited there before.

In Chapter 4 of the manga, Weiss recalls that a conversation she once had with Winter prompted her to realize that the praises she received as a child were only due to her family name and not on her own merits. This spurs Weiss to create her own identity and embrace her own sense of self, just as Winter did.

Weiss arrives at Vale's Cross Continental Transmit System tower to contact the Schnee Dust Company's world headquarters in Atlas for information. When doing so, the operator mentions that Winter might be there and offers to patch Weiss through to her, but Weiss declined.

Winter arrives in Vale during the Vytal Festival following the conclusion of the battle between Teams SSSN and NDGO. When Weiss catches sight of her sister's airship, she becomes overjoyed and hurries off to go meet her. Winter lands in front of Beacon Academy and disembarks, flanked by several Atlesian Knight-200 androids.

Despite Weiss' ecstatic greeting, Winter's initial response is very cold, refusing to tell her sister either the reason for her presence or its duration. She then goes on to criticize Weiss' "novice" performance in the Vytal Festival tournament, refusing to even classify it as a victory. However, after this cold initial exchange, Winter becomes warmer towards Weiss, expressing interest and concern for her well-being, as well as her social life. Weiss accordingly introduces Winter to Ruby, whom she finds "underwhelming" but nonetheless thanks for "taking an interest" in Weiss.

After this exchange, Winter requests a tour of Team RWBY's dorms from Weiss, hoping to ensure everything is in order. However, before they can depart, the pair is stopped by Qrow Branwen, who proceeds to insult Winter and her boss, James Ironwood. This proves to be the final straw for Winter, and it leads to her attacking Qrow. As the two go back and forth in their battle, Winter eventually moves in to finish her opponent; however, she is ordered to cease and desist by Ironwood at the last second. As Ozpin and Glynda Goodwitch arrive to break things up, Ironwood leads Winter away.

The two arrive in Ozpin's office, and Winter paces back and forth with anger. When Ozpin, Glynda and Qrow arrive, Winter begins to criticize Qrow's behavior, but she is ordered to leave by Ironwood, who tells her that they will discuss what happened back on his ship.

Later, Winter shares a meal with Weiss in a pavilion. She says she is about to leave Vale because she was sent there only to oversee additional security units for the tournament. When she learns that Weiss is struggling with summoning via glyphs, she gives a short lesson. She creates a glyph with only one hand, and it expands to form a pure white beowolf. After Weiss fails to summon with a glyph, Winter remarks that if she can't learn, she could always give up and go back home. Where her father could find her work as a receptionist, encouraging her younger sister by appealing to her competitive nature and desire to prove herself.

Winter assumes correctly that Weiss has had problems with their father, so she presents Weiss with two options; Either Weiss could stay in touch with their father and his resources, or she could turn him away and explore as much as she could of both Remnant and herself. The two bid farewell, and Winter leaves Beacon on her airship that night.

Winter, after a few weeks in Mistral as an Atlesian Special Operative, sends word to General Ironwood of a threat in Mistral. She reports about mobilization efforts and sudden spikes in weapon and Dust trading. After some time, she was called back to Atlas by General Ironwood as he closed the kingdom's borders.

Winter Schnee is a tall young woman, with a fair complexion, white hair and slate blue eyes. Her hair is tied up in a bun at the rear left corner of her head, causing her bangs to fall towards the right side of her face, and leaving a small curled lock of hair that reaches below her left ear.

Her attire is blue, white and gray colored. It consists of a white coat with a red brooch, exposed upper arms and black gloves. Her pants have garters incorporated into them.

In Volume 8, she is promoted to the Ace-Ops by Ironwood to replace the deceased Clover. To reflect this, she adds blue and red additional armaments to her uniform.

At first glance, Winter appears to be cold, dignified, and distant, preferring to keep her emotions subdued and speaking in a very high-class, eloquent, almost robotic fashion. However, when interacting with Weiss, she smiles and shows that she cares about her younger sister's life and well-being, based on how she inquires if Weiss has been eating properly, gained any new hobbies, and made any new friends, in "It's Brawl in the Family". Winter is very intuitive towards her younger sister's emotions. With that said, she is not afraid to raise her hand at her younger sister whenever she is annoyed. Overall, she truly loves Weiss and wants her to succeed in life.

Winter can be very harsh as well, especially towards Weiss. In "Lessons Learned" she attempts to teach Weiss how to Summon old foes with her Semblance, only for her sister to fail. Winter fiercely rebukes her younger sibling's excuses, citing her lack of resolve will not help her in the tournament, or as a huntress.

Although she strives to keep her emotions in check, she can be rather hot-headed at times. Once she becomes angry, she drops her dignified ladylike demeanor and loses all restraint, for example when she attempted to attack Qrow Branwen when provoked. She is fiercely loyal to her superior, General Ironwood, and becomes very angry whenever his judgment is questioned; but she is equally faithful to his authority, and respectfully defers to him.

Winter shows great skills with her weapon, displaying above-average speed, agility and reflexes in combat. She is able to both start moving and stop in an instant, as shown when she aborted her final attack on Qrow at the last second upon hearing Ironwood's voice. Her skills with her weapon are impressive, and although she was unable to land any serious blows on Qrow, she was able to parry and match all of his attacks for the duration of their fight.

Winter has the Schnee family Semblance of "Glyphs". Her glyphs have many of the same effects that her sister's do, most notably including the ability to exert forces on herself and objects, which Winter uses to increase her speed to super-human levels and boost jumps.

Like Weiss and other members of the Schnee family, she can also Summon versions of her past enemies to fight for her. Unlike Weiss, she displays great mastery of this aspect of her Semblance. Her Summons are known to include dozens of small Nevermores, as well as full size Beowolves. Her Summons take on a white-blue coloration and emit a soft glow.

Following the death of Penny Polendina in "The Final Word", Winter gained the powers of the Winter Maiden. When active, her eyes emit a ice blue fire around them, the color matching her Aura. 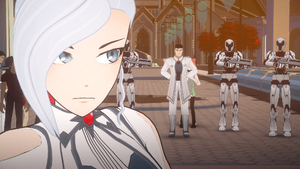 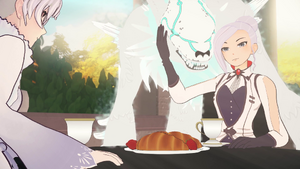 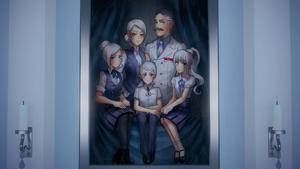 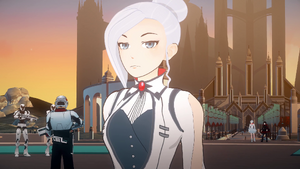 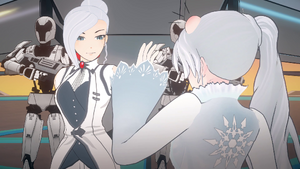 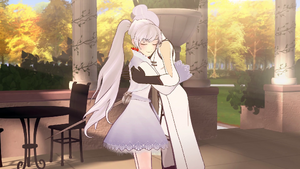 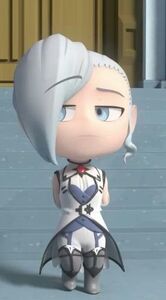 Winter as she appears in RWBY Chibi 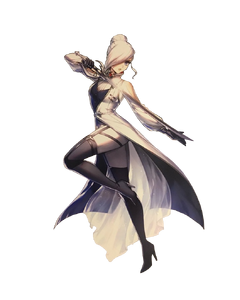