Bucky was a member of the US Army and partner of Steve Rogers, James Howlett, Robert Frank.

During World War Two, Bucky seemingly died. However, he was taken to Belarus and experimented on by Baron Zemo, Red Skull, Arnim Zola who brainwashed him and gave him a variant of the super soldier serum, turning him into the Winter Soldier.

Ghosts of the Past

When Captain America, Thor and Iron Man destroyed the "power amplifier" that Ant-Man built for Doctor Spectrum. Spectrum used his power prism to unleash the fears and regrets of the three avengers. In Cap's case, it was the guilt of his involvement in Bucky becoming the Winter Soldier. The prism's nightmare version of Bucky claimed that Cap had left him to die and that he was lying to himself when Cap stated he tried to save Bucky. Cap was able to defeat Nightmare Winter Soldier by admitting that his inability to save Bucky was something he would always have to live with, causing Nightmare Winter Soldier to return to the power prism.

Originally Bucky was very much like Falcon, but after he was brainwashed he became a stone cold mercenary, though there could still be some good in him.

Artificially Enhanced Physiology: After Bucky fell into a trench in an ice mountain, he was saved and given a metal arm, along with other superhuman abilities from a serum that had a similar effect on the human body as the Super Soldier Serum given to Steve Rogers. Combine this with intense training given to him by H.Y.D.R.A for many years, it has increased his physical stats to the point where he can match even Captain America's superhuman stats.

Naturally Enhanced Physiology: Even without his Super Soldier Serum, Bucky, unlike Cap, has shown to be at the peak of human potential physical and mental conditioning. Therefore, all of his physical feats will not be achievable for any Oplymic level athlete.

Master Marksman: Barnes has expertise in handling firearms and was a remarkably precise shot, even prior to being turned into the Winter Soldier. As the Winter Soldier, he became an even deadlier marksman, being able to make shots that would be seemingly impossible.
Master Assassin: Bucky is a master assassin. Ever since he's been brainwashed, Winter Soldier has lived in anonymity with most of the intelligence community not even believing he exists.
Master Acrobat: Bucky has shown expertise in using an acrobatic way of fighting. This way of fighting is one of the reason why he is able to gain the upper hand against Captain America.
Expert Pilot: Bucky is a competent pilot, being ale to to remote control the Avengers's quinjet as well as using his own quinjet to escape Cap and the Avengers.
Multilingualism: Barnes speaks his native English, as well as fluent Romanian and seasoned Russian (albeit with a thick accent).

Bionic Arm: HYDRA designed a special metallic bionic arm to replace Bucky's lost arm, which he lost after falling from the train. His new arm has also a red star on its shoulder, hinting that the Soviets who operated as HYDRA's allies had also participated in the process of Barnes's transformation into the Winter Soldier.
Winter Soldier's Uniform: HYDRA designed a lightweight tactical suit for Bucky, complete with a half-face mask, which can be opened and closed automatically, in an attempt to conceal his true identity from the world. The uniform is constructed from nomex thread and kevlar fiber. The lightweight suit provides resistance to small arms fire, and has advanced flexibility for close quarters combat, as well as giving Bucky the ability to glide in the sky when necessary. In addition, he also sometimes wears bulletproof tinted goggles to further conceal his face and for eye protection.

Winter Soldier's Refile: Winter Soldier carries a refile capable of blasting powerful energy attack as his standard gear. The refile was shown to have high power in its attack, evidences when it K.O Captain America in one shot, despite the latter's massive superhuman durability against blunt force and energy attack. It was also able to destroy a large part of the train's rail in one shot.
Sleeping Gas Grenade: He has a grenade which stores a gas that is capable of knocking out beings with regenerative healing factor such as Hulk, Thor, etc.
Taser: He has a taser which he can shoot to electrocute his opponents

Winter Soldier's Quinjet: A quinjet which Winter Soldier owns and uses to escape from Cap and the Avengers. This quinjet can be remote control. 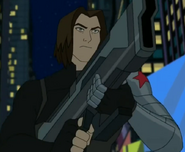 Add a photo to this gallery
Retrieved from "https://hero.fandom.com/wiki/Winter_Soldier_(2010_Marvel_Animated_Universe)?oldid=1749307"
Community content is available under CC-BY-SA unless otherwise noted.