The Winter Warlock, or Winter, for short is the tritagonist of Santa Claus is Coming to Town. Originally he was a cold-hearted evil wizard who lived alone and yells at people until Kris managed to change him by giving him a present.

He was voiced by the late Keenan Wynn.

He starts out as a villain, as he was once unwilling to let anyone pass across the Mountain of the Whispering Wind and go into Sombertown or vice versa to Rainbow River Valley. But after Kris Kringle gives him a toy train, the evil in Winter's heart melts away, resulting in him becoming good. He becomes a vital friend to Kris, giving him land on the Mountain of the Whispering Wind where he and the Kringles can build a new workshop which to build his toys from and make deliveries to Sombertown easier.

As time goes on, though, Winter starts to lose his powers, to the point where he is unable to successfully do card tricks. When Kris is arrested for smuggling toys into Sombertown by the hateful Burgermeister, Winter is also arrested, along with Topper and the other Kringles. He secretly speaks to Jessica when she comes to his cell, and together they come up with a plan to escape: They use Winter's last magical tool, his Magic Feed Corn, to make Kris' reindeer friends fly, allowing them to help the group escape from the prison.

Later, Winter uses one last bit of magic to create the very first Christmas trees at Kris and Jessica's wedding. By the end of the special, it's revealed that Winter's powers have returned, and he declares that there will indeed be a white Christmas.

Strangely, in Rudolph and Frosty's Christmas in July, Winter is not seen in any of the flashbacks depicting scenes from Santa Claus is Comin' to Town. 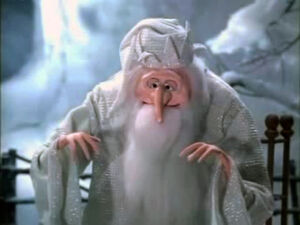 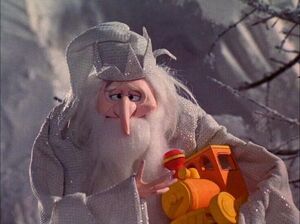 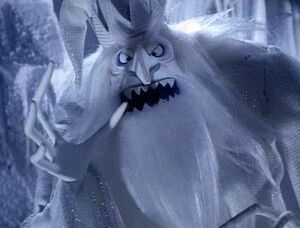 The Winter Warlock when he was mean and despicable 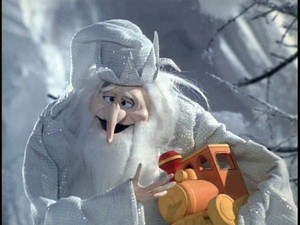 The Winter Warlock reformed as a hero 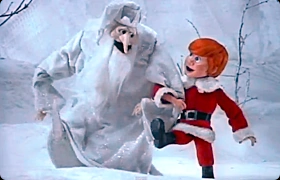 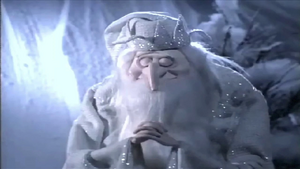