Depends on what the player calls it.

Buddy (commonly, by the player, optional)

Protecting and following the player (tamed).

Survive in the wilderness (wild side).

Follow, obey, and protect the player from danger (tamed).

The Tamed Wolves (also known as Dogs) are the optional deuteragonists of Minecraft. They are the tameable, and neutral mob that the player can tame and be their trustful, loyal, and caring companions, and will do anything to protect the player from those hostile mobs, or even other players. They were added in Beta 1.4.

The wolves in their wild side, are neutral, defensive, and hostile sometimes. But on their tamed side, they are a friendly, loyal, trustful, kind, good, protective, caring, and lovely beings and will always follow any players who tamed them. They also have a good companion to the player, and will instantaneously follow their orders. They are also a good fighter when the player are taking them to the End to fight the Ender Dragon. However, Wolves has a weak damage to the Endermen so its like the wolf companion will probably just die. But bringing your wolf and some iron golems to the End will help you focus targeting the Ender Dragon.

They don't seem to do any heroic acts at first glance when they are on their wild side, but once the wolf is tamed, they will be loyal to any players and mobs in the game, even trying to sacrifice themselves from the hostile mobs just to protect their owners, even if by means being killed, they would still care and show love for the player who owns them. So overall, wolves often acted as the game's "man's best friend", which also unlocks the advancement, "Best Friends Forever". Tamed wolves will keep the player out of harm's way.

In the Java Edition, wolves spawn naturally in normal forests, taigas, giant tree taigas and snowy taigas, along with all variants of these biomes in packs of up to 4.

In the Bedrock Edition, wolves only spawn naturally in taiga and snow taiga biomes, but not in giant tree taiga biomes. 16.6% will be babies. They require light level of 7 or above to spawn.

Naturally-spawned wolves are untamed, and will become hostile if attacked by the player.

Wolves exhibit three different states depending on how the user interacts with them:

Wild wolves have gray fur, a drooping tail, and their eyes consist of two white pixels and two black pupils. They are neutral towards the player and will attack rabbits, foxes, skeleton and their variants without provocation. They may run away when spat upon by llama, depending on the strength of the llama. They will not despawn.

Angry wolves have a constant growling and fearsome appearance. Their tail becomes straight, their eyes become red and the contrast level of the fur increases, revealing dark patches of bristling hair and a mouth line raised in a slight snarl. Angry wolves are only hostile towards mobs that attack them. They can see attackers even if they are invisible.

Skeletons and their variants, foxes, baby turtles and passive rabbits will actively avoid wolves. Killer rabbits will attack wolves. Sheep will ignore wolves other than their random running after being damaged.

The behavior of puppies is the same as tamed wolves. Puppies have larger heads, similar to other animal babies.

Standing tamed wolves will wander randomly when near their owner, but will follow if more than 10 blocks away and will teleport to a nearby free block (if any) if more than 12 blocks away. Besides making travel easier, teleporting can be used to rescue them from lava or pits. Wolves will appear to shake off water after swimming. Tamed wolves will appear to shiver when it is raining and they are not covered by a roof.

The Wolves will first appear as wild, neutral animals who do nothing except to survive in the wild like predators, and attack those who harms them. But this can be avoided by the player by just ignoring and avoiding them in the first place. Once the player got bones from the skeletons, the player can now able to tame the wolves and make it as their own. Tamed wolves would eventually follow the player wherever they go (except when being told to sit). Most players keep their wolves besides their shelter or house, trying to act as "guard dogs". Once the player got involved in a dangerous situation (mostly by being invaded by the hostile mobs) the tamed wolves will try to protect the player by simply attacking their enemies that provoked them. Even at times, hostile mobs will also attack the player's wolves if they have indirectly provoked them (mostly skeletons). Sometimes whenever the player's wolves dies, most players would be saddened afterwards, sometimes avenging their wolf/wolves' death. Most tamed wolves survive if the player is careful enough to keep them alive during the night. Wolves can also act as the player's sidekick, as they would follow the player's adventures. For example, if the player commands them to sit or stand, their wolves would eventually sit or stand, or if the player was being attacked by the hostile mobs, wolves would protect their owners if it means sacrificing their own lives.

Wolves can also be friendly to the villagers and iron golems (if the player doesn't harm them) as they simply stare at them with their friendly eyes. Tamed wolves can optionally participate in village raids only if the player commands them to follow them, and that includes the iron golems. Most wolves easily die in an illager raid if the player didn't look after it for a while, so it is completely optional for the players to let them participate in raids or not. Wolves can also be taken to the Nether, as long as players would keep their eye on them, although this is also optional, as most players doesn't let their wolves follow them in the Nether, and would simply die if they do so, as the Nether is not a very safe place for them. Wolves can also be taken to the End dimension, as long as the player is not being attacked by endermen, as wolves would easily die from the endermen attacks, but it is recommended for the player to bring a massive golem army (iron golems) to take care of the endermen or the player just have to wear a pumpkin to avoid being attacked by an enderman, but wolves would also die if the Ender Dragon indirectly kills them on sight. Whenever the Ender Dragon is defeated, and the player returns home, they can optionally continue their journey if they still want to continue it, or say goodbye to all of their companions, most likely their wolves, by simply qutting their worlds. Even if the player quits their world, or die on Hardcore mode, wolves would still wait for the player's arrival, even if it takes them years or decades, sitting there, completely untouched. This is also same in Creative mode, where if players have wolves living there, wolves would wait until the player opens back their worlds.

Since 2019, the year Minecraft was revived in popularity, many players in the world wanted to check on their tamed wolves again, which are unbelievably still waiting for their owner's to come by and see them. This was commonly known to many players as 'nostalgia', as many players teared up when the glory days of the game were done.

The wolves appear as minor characters in the Minecraft: Story Mode series. However, it only appeared in the Season 2 of the game. The wolves that were seen in the game are Wink, Stacyplays dog, and The Champion City auction where too many puppies were being sold by Stella.

The wolves also appears as the deuteragonist, if not major protagonists on several Minecraft medias and appearing in many animation videos such as Wolf Life, etc. The wolves became a major part of the Minecraft community and was praised due to its loyalty to themselves and became an internet meme worldwide also. It appeared in many Minecraft merchandises.

The Tamed Wolves can show love and kindness throughout the game, as they will kindly help out the players' objectives, and would act as their companions. 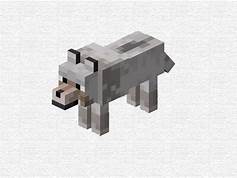 A wolf, stuck in a tree 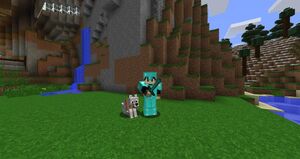 a wolf, sitting besides a player

A wolf with Steve 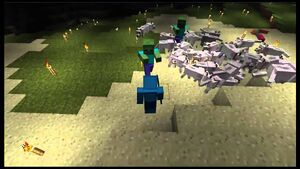 Pack of tamed wolves helping the player to eliminate zombies.