Wonder-Red (ワンダ•レッド Wanda Reddo?) is the main hero of the Wii-U game, The Wonderful 101, and a member of the CENTINELS Planetary Secret Service. His real name is Will Wedgewood (ウィル•ウェッジウッド Wiru Wejjiuddo?), and he is a school teacher outside of being a superhero. He attacks with a giant fist.

Drawing a circle shape will activate Wonder-Red's Unite Morph, Unite Hand, a large red fist whose size varies depending on the number of available heroes.

Unite Hand is a Unite Morph that packs quite a punch. Its speed also makes it useful for executing combos. Its range is somewhat smaller than the other Unite Morphs. The more members you unite with just means you’ll make a more powerful, further-reaching Unite Hand.

Unite Hand also has defensive and helpful purposes. While activated it can automatically absorb fire-element attacks, negating the damage dealt by the attack. After absorbing a fire attack, it also gains the ability to shoot fire balls. Unite Hand can turn all sorts of knobs, dials and cogs that you wouldn't be able to twist by normal means.

The young leader of the Wonderful 100. Having just joined the Wonderful Ones after finishing a year of comprehensive training, Earth Defense War III is his first experience in combat.Though technically still a rookie, he is extremely gifted, achieving a record score in both the written and field sections of the CENTINEL tactical examinations. However, his inexperience has led Blue and Green to doubt his abilities as a leader on more than one occasion.

Brimming with passion for justice, he takes a firm stance against those who threaten peace, but his by-the-books attitude and serious personality can occasionally rub people the wrong way.

Sometimes Red’s seriousness crosses the realm of reason, and those around him find getting through to him almost impossible. The opposite is rarer, though, as Red has an incredible memory, and never forgets something after being told, as demonstrated by him recalling the other Wonderful Ones' titles so well that Blue jokes that he must be hiding a teleprompter somewhere.

His deep-crimson CENTINEL-Suit boasts balance in all levels of performance, demonstrating diverse aptitude in any mission. The Vulcan Knuckles equipped to both his arms are capable of intense blows and machine-like accuracy, which can be even further increased in power via the “Unite Hand” Unite Morph technique.

Red truly believes the children are our future, so he has taken on the guise of a Blossom City Elementary School teacher in his everyday life, teaching them well so they can lead the way. At school, Wonder-Red goes by the name Will Wedgewood. None of the students realize his true identity, but inside he enjoys the popularity his superhero persona receives. That same Wonder-Red however, saw his father mortally wounded in front of him by Laambo twenty years ago but found the strength to put his mission ahead of revenge.

Wonder-Red is the leader of the active Wonderful 100, albeit he is the last member recruited by the CENTINELS Planetary Service. Red is gifted as an expert on field and writing, and unbelievably gets a perfect score.

As of his childhood, his civilian counterpart, Will Wedgewood, has a fondness of weapons that the CENITNELS have. He was shown to "shy away from battle", became scared easily when encountered by the GEATHJERK, and saw his father mortally injured.

Time passed as Will joins in to become a Wonderful One, personalized as supportive, heroic, and strict. Despite being visibly in great shape, he comes-off as nervous, tends to stutter, and is all-around not very threatening, as of Red's civilian description. Though he thinks of his father's melancholic death as a result, Will acts calm and collected and focuses on the missions.

Wonder-Red while in his civilian form, Will Wedgewood, dresses in business-casual attire. His outfit includes a white, shiny, collared shirt with long sleeves. The sleeves of his shirt are black at the forearm and down to the wrists, with no visible cuffs. His shirt is buttoned up to the top, giving him a rather professional appearance. He wears a cerulean necktie in a very even, tight knot, and wears it tucked under his red, knitted, V-neck sweater-vest. His vest is somewhat more snug than his shirt, conforming well to his honed shoulders and pectorals. Will wears grey trousers that possess one long pleat on the front of each leg from the waistline to the bottom, accompanied by much shorter pleats beside them, one on each side. There are no visible front pockets on his pants, but there are back pockets. His sweater-vest is just long enough to cover the belt-loops of his trousers. His pants descend into half-breaks above his black, oxford shoes. His shoes have dark red soles. The part of Will's vibrant, yellow-blonde hair naturally forms above his left brow. His medium-length hair rests neatly combed against his head. His hairline is straight. The shape of his eyebrows are rectangular, angled, and taper into points toward his temples. They are a darker yellow than his hair. Will's nose is pointy, narrow, and straight, his septum being a little lower than his nostrils. Will wears large, masculine glasses with thick, black frames. They are large enough that his eyebrows are nearly completely hidden behind them. The lenses are a nearly-opaque white, showing some slight implication of his skin tone behind them, but they conceal his eyes completely on most occasions. His eyes are a deep blue and almond shaped with a very sharp gaze. He is Caucasian in his nationality.

As his alter-ego, Wonder-Red, he dons his crimson CENTINEL-Suit. His hair oddly becomes somewhat darker in color in most lights, and is slicked-back and spiky, almost identical to his father, Arthur Wedgewood's hair. One single lock of hair flows forward over his right temple, although it is sometimes seen over his left temple in mirrored images. All the same facial features as his civilian form apply, but now a standard Wonder Mask conceals the majority of his face. His CENTINEL-Suit consists of a bright red crop jacket with two popped collars. The Wonderful 100 emblem appears on the back of the jacket. The length of his jacket ends at approximately the bottom of his ribcage. On the left sleeve of the jacket, there is a silver badge-like attachment from which flows a red sash. This red sash is seen on Wonder-Red in all cinematic sequences, but swaps between characters depending on who the player sets as the leader during gameplay. His black gauntlets, The Vulcan Knuckles, extend all the way up his forearms. They are adorned with red padding and gold accents, along with some sort of dial with no known purpose on each gauntlet. The front of his suit from his neck to his pelvis is black. The sides, back, and legs are each a deep red. He wears simple, black boots that point upward at the knees. Upon his chest is the Shirogane Drive, present on all Wonderful Ones. 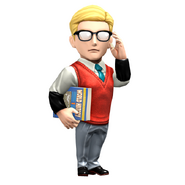 Wonder-Red as civilian.
Add a photo to this gallery
Retrieved from "https://hero.fandom.com/wiki/Wonder-Red?oldid=2107162"
Community content is available under CC-BY-SA unless otherwise noted.