Member of the Super Readers

Can Transform words that rhyme

Reading Books,
Playing with her friends

Help her friends with their problems

Little Red Riding Hood is one of the main characters in the animated series Super Why! Her main catchphrase is, "Red Riding Hood, Rolling In!" (see the above quote.) Her basis is a fairy tale character of the same name. She is also the titular character from the fairy tale of the same name and a member of the Super Readers. In storybook village, she lives with her grandmother and is a skilled skater in the community. When she transforms, she goes by the alias Wonder Red, and gains "Word power", or the power to "Rhyme". She is voiced by Siera Florindo in the first two seasons and T.J. McGibbon in the third season.

Red Riding Hood has fair skin, hazel eyes, and auburn, shoulder-length hair tied into two pigtails by red scrunchies.  Her most prominent feature, however, is the freckles on her cheeks.

In respect to her name, her main outfit is a red long sleeve shirt with white trim and matching pleated skirt in the same color.  She wears a red, beret-like hat with the outfit, and a pair of red, mary-jane shoes, that also act as a pair of skates that allow her to travel around her village quicker.

Upon transforming into Wonder Red, her hair becomes slightly longer as it transforms into braided pigtails.  Her hat turns into a helmet, which is noted to have a purple stripe running directly through the center of it.  Her outfit becomes a purple jumpsuit/leotard with red straps and a red belt with a swirl symbol in the middle.  She also gains red fingerless gloves with purple trim, purple kneepads with a red center, a red cape, and a pair of purple skates with red wheels and straps.  As an accessory,  she also gains a red duffel bag, which allows her to switch words with similar rhyming ones.

Despite her appearance (She wears a skirt in her normal state.), Red tends to be very tomboyish. This is similar to the Little Red Riding Hood incarnation from the Hoodwinked! series.  A thing that should be noted about her is the fact that she has more friends that are boys rather than girls, and she often prefers participating in more masculine activities such as playing sports, or even her favorite hobby, skating. On the other hand, she doesn't refuse to take part in activities that her friends, especially Princess Pea prefers. While she may be caring for her grandmother, she can occasionally tend to be a jerk to her friends by acting quite rude and even greedy, a common problem she frequently encounters throughout the series.  She can also be very authoritarian towards her friends as well.  However, she also likes to cheer her friends up by making them have a good laugh. 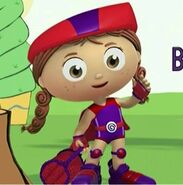 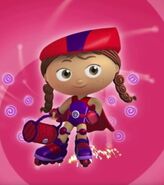 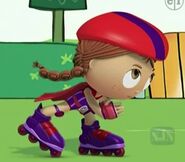 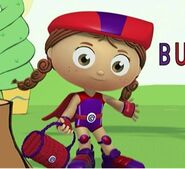 Add a photo to this gallery
Retrieved from "https://hero.fandom.com/wiki/Wonder_Red?oldid=2107152"
Community content is available under CC-BY-SA unless otherwise noted.