Wonder Woman is a superhero from DC Comics who has her own series as well as being a regular member of the Justice League. She is an Amazon who fights crime with aid from her bullet-proof wristbands, magical-lasso and superhuman-strength, and the ability to fly.

Molded from clay by her mother, Queen Hippolyta, Princess Diana was bestowed with powers and abilities from the Greek gods and goddesses, and trained by her fellow Amazons on the paradise island, Themyscira, to use her powers carefully - even though Princess Diana bested them in battle. When United States Army Air Corps Colonel Steve Trevor crash landed on Paradise Island, Hippolyta was instructed by Athena and Aphrodite to hold a contest to see which Amazon would accompany Steve back to "Man's World" (as the Amazons called the outside world) to fight evil, because entities (such as the Nazis during World War II and, later on, Communist spies, criminals, mad scientists and other antagonists) were spreading deceit, enmity, corruption, contempt, discord and terror.

The contests consisted of one-on-one combat, archery, discus throwing, and racing. Wonder Woman had decided to help the United States in particular because she had seen their war-time symbols of making a difference as being all female and assumed the US was progressively feminist, thus aligning with Themyscira's sensibilities.

Although forbidden to participate because leaving the island would mean giving up her eternal youth, Diana defied her mother and entered the contest, with her face hidden under a combat helmet. But Queen Hippolyta assumed the winner's identity before the end of the competition. Much to Queen Hippolyta's regret, she felt inclined to award Princess Diana as the winner. Diana was given a red, blue, and gold outfit which was adorned with white stars, and knee-high boots. A golden "M" (an alternate costume is seen with Zeus' sacred animal: an eagle in its place) embroidered on the upper part.

Queen Hippolyta also entrusted her with the Lasso of Truth, which compelled others to speak honestly, and impenetrable silver bracelets forged by Hephaestus. Diana took on the title Wonder Woman, and set off as the Ambassador of Peace, not only using her strength to fight evildoers and solve decisions, but her kind-heart and wit too.

Wonder Woman posses a different ability from a select few of the Greek gods and goddesses. Originally, Wonder Woman used an invisible plane that responded to her voice and only one of Amazon descent could see, but she was later gifted with flight. Her patron goddess is Hera, queen of Olympus, goddess of marriage and wife to Zeus, who freed the Amazons from the clutches of the war god, Ares, and gave them a home on an unplottable Paradise Island.

She is a master of armed and unarmed combat, proficient with nearly every weapon ever made (especially the bow and the javelin) and the exotic martial arts styles of the Amazons. Batman once remarked that Wonder Woman is the best melee fighter in the world.

intelligence, though the degree varies from author to author. She is among the smartest and wisest members of the Justice League of America, along with the Martian Manhunter and Batman.

speak her native Themysciran, Ancient and Modern Greek, English, Spanish, Portuguese, French, Mandarin Chinese (she expressed "difficulty" with the tones of Cantonese during an interview with Lois Lane), Russian and Hindi. Plus, through precise muscle control, she can mimic other people's voices for short conversations (on the telephone). It is more difficult, for her to mimic a mans voice than another woman's voice.

strategist and tactician, trained in the arts of leadership, persuasion and diplomacy, and possesses a great deal of courage as well. She is a gifted leader.

magical knowledge to use an alchemical spell to create a portal.

Wonder Woman in Injustice: Gods Among Us

Gal Gadot as Wonder Woman in the DC Cinematic Universe

Lynda Carter as Wonder Woman, from the 1970s live-action series 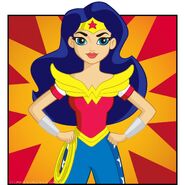 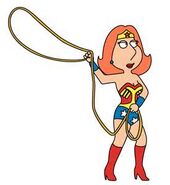 Wonder Woman in Justice League Heroes
Add a photo to this gallery
Retrieved from "https://hero.fandom.com/wiki/Wonder_Woman_(DC)?oldid=985035"
Community content is available under CC-BY-SA unless otherwise noted.