Saving the town and defeating the villains.

She is the female superhero, and the leader of the Super Hero Girls.

Diana Prince was originally the name of a U.S. Army nurse during World War II who provided the primary alias for Princess Diana (Wonder Woman) of the Amazons. ... When Wonder Woman asked her what was wrong, Prince explained that her fiancé, Dan White, was in South America and she lacked the funds to go to him.

She's appeared as a Superhero, and a Student. In "#SweetJustice", she taught her friends as becoming Superheroes and first time saving the day from the Villains.

Characteristics. Wonder Woman is a compassionate caring, stubborn, opinionated, highly competitive, outgoing, immortal Amazon. Wonder Woman is a warrior born. She tries to avoid conflict but if pressed she will engage in battle and on occasion lose herself in the pleasure of battle. 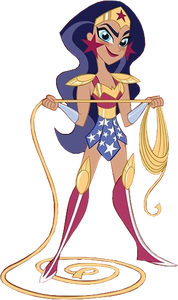