To protect the world from evil threats and supervillains.

Wonder Woman is first heard during The Flash's chapter, contacting him and asking him to go to Gotham, though she becomes worried when she hears him momentarily pained by the Kombat Rage, though he assures her he is fine. Wonder Woman is playable during the third chapter of the DC Universe story mode. She is first seen on Themyscira, discussing with several fellow Amazons when she is contacted by Batman who informs her that the Earth is coming under another invasion, something Diana already knows as she stares at her corrupted island. The sorcerer Shang Tsung and his Tarkatan followers then confront Wonder Woman. Both demand that the other leave and ultimately Shang Tsung challenges Wonder Woman to a fight.

Wonder Woman defeats the sorcerer, and he flees, allowing Wonder Woman a chance to discuss with Batman over her communicator the nature of the two worlds merging before he tells her they need Superman. Wonder Woman goes to Metropolis to search for him and witnesses Kitana emerge from a portal, raving and ranting about someone she just encountered. Wonder Woman tries to offer her help, but Kitana is infected with the Kombat Rage and believes her to be an assassin before attacking her.

Wonder Woman defeats Kitana, still pleading with her to let her help, but Kitana retreats through another portal. Diana is again contacted by Batman and learns the Fortress of Solitude has been breached. Shocked, she goes to investigate and discovers Superman frozen in ice by a winded Sub-Zero, who refuses Diana's offer of surrender and fights her, but loses, allowing him to captured. Wonder Woman then frees Superman from his icy tomb and she learns his powers have been fluctuating because of the magical nature of the world's merging.

She attempts to ask Sub-Zero who is behind the invasion, but is suddenly contacted by Green Lantern and learns Captain Marvel is on a rampage on the U.N. Orbital Satellite. She takes Sub-Zero with her and sees Marvel apparently kill Green Lantern, forcing her to fight him. A subdued Marvel pleads for help from Wonder Woman, unable to resist the Kombat Rage, and so she orders a special cell be made to contain him.

While trying to move Sub-Zero into his own cell, she confronts Jax who had just infiltrated the satellite and is momentarily consumed by the Kombat Rage, deflecting all his machingun fire before fighting him, only to be defeated. Green Lantern later saves her and Captain Marvel from Jax and Sonya Blade and Wonder Woman returns to Themyscira, where she confronts Scorpion in his search for the 'princess', but is also defeated by the vengeful spectre.

Wonder Woman later joins the combined forces of heroes and villains as they use the Special Forces portal to go to the merged Apokolips/Outworld, and is corrupted by the Kombat Rage from Dark Kahn. She fights Kitana once again in the final battle but is knocked out. Wonder Woman later witnesses the restoration of the DC Universe.

Diana of Themyscira is Wonder Woman, a leading member of the Justice League of America. In her civilian identity Diana Prince, she works for the Department of Metahuman Affairs. She is the former mentor of Donna Troy, and the current mentor of Cassie Sandsmark as well as all magic based new heroes. 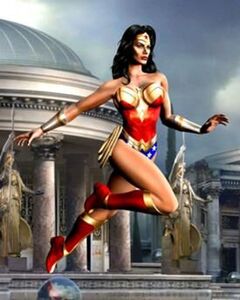 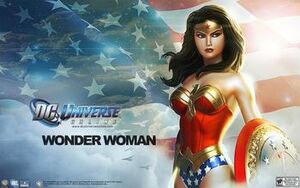 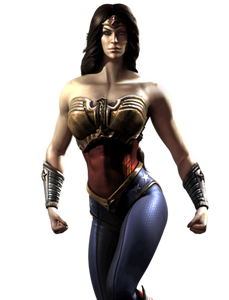 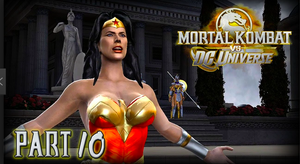 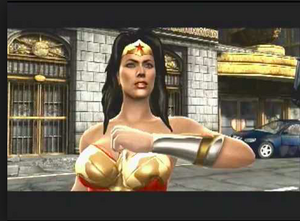 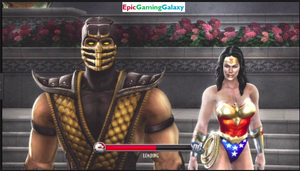 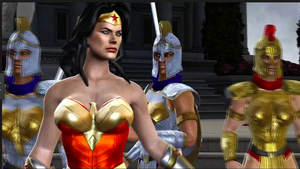 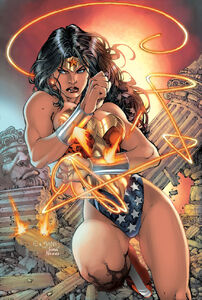