NOTE: This article is about the incarnation of Wong from the Marvel Cinematic film series. The mainstream version can be found here: Wong (Marvel).

Leader of the Masters of the Mystic Arts

Stop the Zealots and Dormammu (succeeded).

Protect the New York Sanctum.
Aid the Avengers and his allies to in defeating Thanos (succeeded).

Dormammu
Black Order (and its 2014 counterparts):

He is a member of the Masters of the Mystic Arts, a group of sorcerers led by the Ancient One to protect the world from mystical threats. He helped Doctor Strange battle against Kaecilius and the Zealots stop Dormmamu's return, and became one of the protectors of the New York Sanctum.

When Thanos decided to collect the Infinity Stones to erase half of the universe, Wong protected New York after Doctor Strange was kidnapped by Ebony Maw. He survived the decimation and replaced Strange as the new sorcerer supreme. When all of the victims were resurrected by Hulk in 2023, Wong helped the heroes defeat Thanos and his army during the Battle of Earth. He later attended Iron Man's funeral alongside Strange to honor his sacrifice in stopping the Mad Titan and his army. After the blip, Wong would become a challenger in the Golden Daggers Club, and became an ally to Shang-Chi and Katy Chen, informing them that they were on a hero path.

When Scarlet Witch wanted to locate her sons across the multiverse, Wong led the Masters of the Mystic Arts against her during the attack on Kamar-Taj. Though initially restrained by Maximoff, Wong assisted Strange in stopping her, and later welcomed America Chavez as the newest member of the Mystic Arts.

He is portrayed by Benedict Wong, who voices a different iteration of the character in the animated Disney+ series What If...?

Wong was one of the monks studying with the Ancient One in the city of Kamar-Taj. Eventually Wong would be made the curator for Kamar-Taj's vast achieve of spells, artifacts, historical records and equations.

When encountered during the film, Wong gives doctor Stephen Strange his beginner literature to help him adapt to the concept of magic. Strange had come to Kamar-Taj to seek the magic needed to restore his hands after his nerves were shot in an auto-accident so he could return to his career as a surgeon. Wong stresses that Strange must take his studies slowly. Strange's initial desire just to return to heal his injury is dropped once he sees what Wong kept in his archive.

As soon as Strange mastered the ability to open portals he began reaching into the archive literally behind Wong's back to get more and more advanced spells. Eventually Strange discovers spells to alter time however doing so is the line neither the Ancient One nor Wong are willing to let him indulge, stating to alter time is to create chaos in the universe. Strange is disciplined for using time manipulation to recover a spell stolen from Kamar-Taj by the rogue former student, Kaecilius. Strange's willingness to use a spell that manipulates time indicates he would be willing to go as far as Kaecilius and so it is something Wong takes very seriously.

After encountering Kaecilius himself Strange finds out that Kaecilius and a few other exiled students have banded together as a cult to the inter-dimensional entity known as Dormammu. The Ancient One is killed and passes her artifact, the Eye of Agamotto, onto Strange. The Eye of Agamotto holds power of time and is how the Ancient One delayed her own death for centuries. With the Ancient One gone though, and one of three important sanctums on the planet destroyed in Kaecilius's first attack, he and his cult begin their ritual to merge Earth with Dormammu's realm, The Dark Dimension.

Wong appears in Shanghai, another of the two remaining sanctum locations to stop the cult. Through manipulation of time - fighting the battle backwards in time, both wizards are able to hold off Kaecilius after/as/before he started his onslaught, ending with Strange traveling to the Dark Dimension to confront Dormammu. Strange would return, triumphant, with Wong awarding him a newfound respect. Wong joins Strange in the third sanctum in New York.

In film, Avengers: Infinity War, Wong and Doctor Strange encounter Bruce Banner, who is beamed down to Earth from space. Hulk had been lost in space with Thor, both men members of the previously established "Avengers" team, who had earned their fame fighting off an alien invasion years before. Hulk was blasted back home by Thor's ally, Heimdall. With Thor captured by Thanos - the Mad Titan, and Heimdall about to die, Heimdall did not wish for one of their last living friends to die and so called on the last of his magic to beam Hulk all the way home before Thanos could kill him. Hulk was beamed right out of his fight and down to the Sanctum Sanctorium, it is ambitious if this was by chance, Heimdall's intent, or if the Sanctum's status as one of the mystically crucial hot-spots of the planet attracted the energy.

When he arrives, he is no longer in his alternate form/persona of The Hulk and is Bruce Banner again. Bruce's warns Doctor Strange and Wong of Thanos and that he is coming, looking for the Infinity Stones. The Infinity Stones are the manifestation of base universal concepts left over from the big-bang. Having all of them together would make whoever possessed them omnipotent and Thanos is intent on gaining them to wipe-out half the universe. Doctor Strange warps Tony Stark, another member of the Avengers over to his sanctum to hear Banner's story. Wong and Strange both know that the Eye of Agamotto has one such Infinity Stone in it, The Time Stone. Both Wong and Strange want to stop Thanos but also that the must maintain their oath to the Ancient One to keep the Eye/Stone safe.

While Wong encourages Strange to run and keep the Stone as far away as possible, when Thanos's forces arrive on Earth Strange is compelled to join Stark and his new apprentice, Peter Parker, to stop the invasion force. Wong uses his teleportation skills mostly to keep Spider-Man safe and warp away Cull Obsidian - one of Thanos's main generals, to the arctic. Wong needs to trust Iron-Man and Spider-Man to save Doctor Strange when he is captured as he can not leave the Sanctum unguarded any-longer. Wong teleports back to the Sanctum to stoically guard with Doctor Strange taking the fight to Thanos, but Stephen was among the many victims of the decimation when the Mad Titan snapped his fingers.

After the snap, Wong would become the new sorcerer supreme since Strange was one of the countless victims of Thanos' victory. Wong participates in the Battle of Earth to stop Thanos and his army alongside Doctor Strange, the Avengers, the Guardians of the Galaxy, the Asgardians, and the Ravagers. Thought they succeed in stopping the mad titan, it was at the cost of Iron Man, who stopped the former. Wong later attended Tony's funeral alongside Strange, honoring his sacrifice.

After the blip, Wong would act as a freelancer while still being a member of the mystic arts, and soon became a challenger in the Golden Daggers Club. He would participate in the tournament with the Abomination, whom he would defeat before the two left the tournament in a portal. Wong would detect a beacon that was emitted by the ten rings obtained by Shang-Chi, and would meet him and Katy Chen after they stopped the Dweller-In-Darkness. Brining them to the sanctum, he introduced the two to Bruce Banner and Carol Danvers, informing them that they were now on a hero path that they couldn't turn back on.

In the fall of 2024, Wong maintained his role as the new sorcerer supreme, and would greet Peter Parker when the latter arrived at the New York Sanctum. He would overhear Parker ask Strange to cast a spell to undo Mysterio's actions, but Wong warned Stephen that the spell was too dangerous to cast. However, Strange reminded Wong that they casted the spell previously at the Kamar-Taj, and Wong decided to trust Stephen's judgment. Strange would cast the spell, but would have to help Parker deal with "visitors" that arrived when spell was first disrupted by Peter.

When Gargantos arrived to the universe, Wong traveled to New York to stop the creature, and was assisted by Strange in killing it. The two were then introduced to America Chavez, learning that the creature was chasing her and that she could travel across the multiverse. The two sorcerers didn't believe her, so she decided to show them the corpse of an alternate version of Strange that was killed during her journey. Later on, Wong learned from Strange that Scarlet Witch was being corrupted by the Darkhold, and that she was coming for Chavez to obtain her powers. Wong and the Mystic Arts defended Kamar-Taj, but they were captured by the witch during the battle. When Sara Wolfe destroyed the Darkhold at the cost of her own life, Scarlet Witch demanded Wong take her to Wundagore Mountain since there was another copy of the book of book there.

At the mountain, Wong was assisted by Strange, who dreamwalked through his alternate version's corpse to stop Maximoff. The two succeeded with Chavez's assistance, and Wanda destroyed every version of the Darkhold in the multiverse as the mountain fell upon her. Afterward, Wong worked on rebuilding Kamar-Taj, and welcomed Chavez as a member of the Mystic Arts.

Wong is serious and capable instructor of the Mystic Arts, spending his entire life protecting the world from mystical threats. Though he believed in the Ancient One, he was more flexible than Mordo, who refused to believe in bending the rules when needed. An example being that he agreed to Strange's plans to use the Eye of Agamotto against Dormammu, unlike Mordo, who decided to leave as a result. When not on duty, Wong shows a more relaxed and comical side, showing his sense of humor when battling Abomination and spending time with Shang-Chi and Katy Chen. 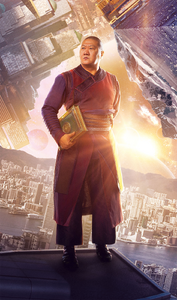 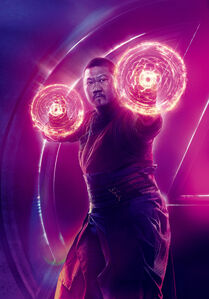 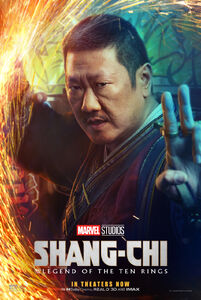 Wong's character poster for Shang-Chi and the Legend of the Ten Rings. 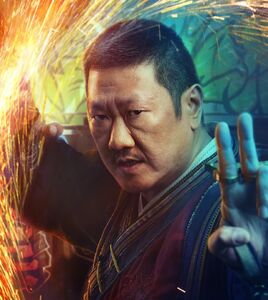 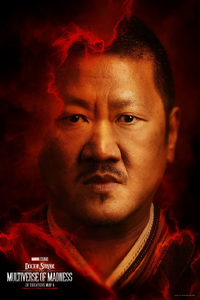 Wong's character poster for Doctor Strange in the Multiverse of Madness.