Build and launch a rocket into space. (succeeded)

Help Geo and his friends to defeat Dealer. (succeeded)

He is a fellow student at Echo Ridge Elementary and head of the science club whose dream is to launch a rocket into space. Geo and the gang help make that dream a reality. He later returns the favor and helps Geo get to Meteor G with another rocket.

Little is known about Woody's life, he is the head of the Science Club and studying and dreaming of launching a rocket into space.

During the first half of the game, Luna holds a meeting, wanting to become class president again. Her first order to become class president is to look for people in need of help, Geo eventually meet Woody in the Science Club. Later, Geo heads for the science room, Luna introduces her group Woody. Luna ask Geo if they know each other, Geo tells her they met on the school's roof earlier. Luna tells her Geo, Bud and Zack that their going to manage the construction of the rockettelling Geo he wants to launch a rocket into space using his Magnes. Woody asks Geo to get him a special card, which is only available from a tournament in Spica Mall.

Before the rocket launch, Queen Tia and Jack corrupt Woody's Wizard Magnes with a Noise Card, making him go out of control, turning him into Spade Magnes. On the roof top of the school, as Woody commands Magnes to launch, causing the experimental rocket to malfunction. The rocket starts increasing and trying to pull civilians to it, Woody states that Magnes is using metallic items they have on them to pull them in. Luckily, Geo defeats him and turns Magnes back to normal. After that Magnes gets a little emotional and apologizes for the trouble he caused, he just did not want to be worthless, but Mega Man tells him that he is not and he is the best Wizard he ever met. After the incident, Woody launches the rocket, the group starts to celebrate as a success.

Geo and the staff of WAZA HQ, as well as Lee Stern and Woody, meet up and discuss what they should do, saying Meteor G will crash to Earth in 12 hours, but Heartless reveals that due to Kelvin's power, he is able to stall the meteor for at least 24 more hours, and WAZA decides to launch Mega Man into the red shooting star to destroy Meteor G using Woody's space rocket, and Lee building Real Wave barrier to protect the rocket until it reaches Meteor G.

While Geo and the others planning to stop Meteor G, King appears to organization that he made himself into a EM Being using Joker’s program, since a human being can’t survive in the Noise Wave. King calms that his “feelings” are hurt by Heartless’ betrayal as he attempts to kill her, only to be stopped by Mega Man. Before King retreats, he says that his plan is not fully complete, but that he will rule the world in time.

It is unknown what happened to Woody after Mr. King's defeat, but it assumed that he is still engineering rockets after the events that occur in the game. 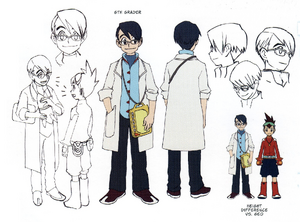 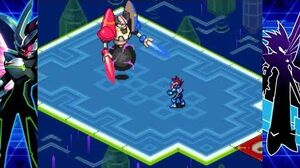