Star Trek: The Next Generation

Maintain good relations between the Federation and the Klingon Empire (current)
To coordinate all starfleet activity in the Bajorian sector
To make sure Starfleet's flagship is completely secure.

Worf, Son of Mogh is a heroic character from the Star Trek franchise. He was also the first Klingon in Starfleet, to be followed by B'Elanna Torres and her daughter, Miral Paris.

He is potrayed by Michael Dorn who also voiced Mata Nui in BIONICLE: The Legend Reborn, Taurus in Gargoyles, and Marcus in Fallout 2 and Fallout: New Vegas.

Worf was born on the Klingon homeworld of Qo'noS on the Earth date Dec. 9, 2340. He was the son of Mogh and his wife Kaasin, and was named after Mogh's father. He was the elder brother of Kurn. At a young age Worf accompanied his parents to the Khitomer as Mogh attempted to track down a traitor who was working with the Romulans. Mogh was unable to uncover Ja'rod's treason before the Romulans attacked, killing over 4,000 Klingons - including both of Worf's parents.

The Starfleet vessel Interpid responded to the disaster. Worf was discovered by a Chief named Sergey Rozhenko. Worf had some injuries that resulted in some memory loss. Informed that Worf had no surviving relatives, Sergey and his wife Helena took Worf into their family. Mogh's friend Lorgh assisted in making sure the adoption was approved by the Klingon government. In order to ensure the survival of the House of Mogh Lorgh in turn raised Kurn as his own son.

Worf tragically learned the need to be disciplined in his reaction with humans when he accidentally head butted another young human named Mikel during a soccer match. Mikel broke his neck in the process. Even though it was an accident Worf felt a great deal of guilt over causing that death, and worked to make sure another accident like that never happened again. This caused him to distance himself from others and carry himself with a serious demeanor.

When Worf came of age he and his human brother Nikolai entered Starfleet Academy. Nikolai found he didn't like life at the academy and left after about a year. Worf stayed with it and graduated in 2361.

In 2364 Worf was assigned to the Enterprise-D under Captain Jean-Luc Picard. Except for when left Starfleet to fight in the Klingon civil war he would remain on the Enterprise until the ship was destroyed in 2371.

After the destruction of the Enterprise Worf was called to assist Captain Benjamin Sisko on Deep Space Nine. At Sisko's behest Worf decided to remain on DS9. He accepted a transfer from security to operations, and became DS9's strategic operations officer.

During his time on DS9 Worf became close friends with and eventually married the joined Trill Jadzia Dax. In 2374 Worf chose to save Jadzia's life instead of going to a rezendevous with a Cardassian defector, this seriously damaged Worf's career and Benjamin Sisko told him he would probably never be given his own command after this.

He was assigned to DS9 until 2375, when he was named Ambassador to the Klingon Empire.

As Ambassador to the Klingon Empire, Worf played a critical role in helping Chancellor Martok regain control of the Empire following Gothmara's coup.

Feeling unfulfilled in his role as Ambassador, Worf approached President Nanietta Bacco and requested to be reinstated in Starfleet, the one place where he felt fulfilled. He nominated his son Alexander to be his replacement as Ambassador. President Bacco agreed to his request and his recommended replacement, and Worf rejoined Starfleet by 2379. He became first officer of the Enterprise-E after William Riker was promoted to Captain and named Captain of the USS Titan.

Due to his exemplary service Admiral Leonard James Akaar placed Worf on a list of officers to be promoted to Captain and offered his own ship in 2386. Captain Picard expected that the promotion would happen within a year.

After he was promoted to the rank of Admiral in 2382, Picard recommended that Worf be promoted to Captain and appointed to succeed him as commanding officer of the Enterprise-E. There was some small resistance due to Worf's reprimand for putting Jadzia Dax's life ahead of his mission on Sakura, but Picard argued Worf was a better office due to his experience and had given exemplary service in all the years following that incident. Picard also argued that it would be good for Klingon-Federation relations to have a Klingon commanding Starfleet's flagship. Agreeing with Picard, Starfleet promoted Worf to Captain and gave him command of the Enterprise.

Worf was still alive in 2399, when retired Admiral Picard's aide Zhaban suggested he contact Worf to assist him in his quest to save the life of Soji Asha. Picard admitted he thought about doing so but decided against doing so as Worf would have joined him without hesitation, and he did not want Worf or his former colleagues to endanger themselves on his behalf. 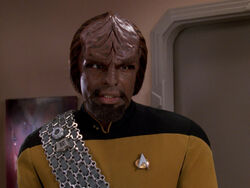 Worf in his moments of typical annoyance. 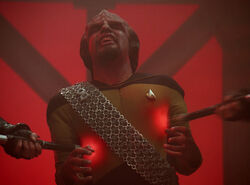 Worf undergoing a ritual typical of his people. 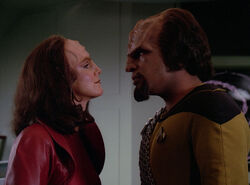 Worf and his love interest, K'ehleyr. 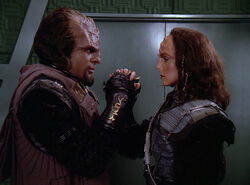 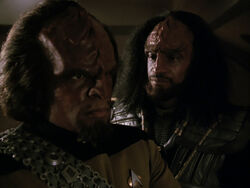 Worf with his brother, Kurn. 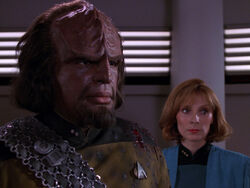 Worf with the Doctor Crusher.