In the Worms games, the Worms that the player or CPU controls fight to the death in deathmatch games. Worms have a large arsenal of weapons, and have weapons such as Bazookas and Grenades. Worms seem to be a bit humanoid. They have large eyes, they have a tail and no legs (obviously), they have a mouth and they have floating eyebrows, they are all pink, they have hands but no arms, etc. However, the original Worms design looked quite different. They were a red-ish colour instead of pink, they were skinnier and taller, they had arms, a large nose, their eyes were smaller, and they had lines on their body. The Worms' appearance has quite changed throughout the years. There was especially a big change in 1997 (Worms 2). In Worms: Revolution, there are 4 different types of Worms with very different appearances. Anyways, the Worms seem to be quite homicidal (and suicidal), as seen in gameplay, and in many cutscenes of the game. The most well-known Worms characters are Boggy B, Spadge, and Clagnut, who appeared in the Wormsongs.

Some of their body parts could possibly look like they've appeared from Rayman's. 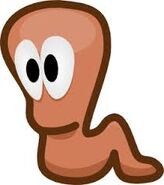 Add a photo to this gallery
Retrieved from "https://hero.fandom.com/wiki/Worms?oldid=1586643"
Community content is available under CC-BY-SA unless otherwise noted.