Battle the Decepticons in the dirtiest battles

The Wreckers are an elite Autobot commando squad, composed of the best and toughest fighters around. They first appeared as a recurring force in Marvel's the Transformers UK exclusive comics.

The Wreckers were Emirate Xaaron's special ops squad, with their earliest chronological appearance in Cybertron: The Middle Years. Their first mission was to successfully assassinate Decepticon dictator Trannis. However, this lead to the more ruthless Straxus replacing him.

n 1986, the roster of the Wreckers consisted of Impactor (the leader), Roadbuster, Whirl, Twin-Twist, Topspin, and Rack'n'Ruin. The team were set to be at the business end of Operation: Volcano, killing ten of the most deadly Decepticons as they converged on a staged conference, with Ultra Magnus as back up. Without Ultra Magnus around to help, however, they would have been massacred soon after and they came close to backing out. After Roadbuster, Whirl and Twin Twist found themselves defending a small Transformer fram a bullying Decepticon, they were inspired to do their duty. The Autobot Triple Changers, Broadside, Sandstorm and Springer, were sent in as Magnus's replacements.

However, when Megatron unknowingly called off the Decepticons' advance, the Wreckers' plans were also cancelled. However, one of the Decepticons, Macabre, had stayed behind to kill Emirate Xaaron, and Impactor sacrificed himself to save the Autobot leader. Impactor named Springer his successor as he lay dying.

After the incident, the Wreckers began working with Ultra Magnus. Together, they captured Optimus Prime when he returned to Cybertron, having been fooled by Decepticon misinformation into believing that he was a facsimile. They came close to executing the "imposter" but he was saved by the intervention of Outback. The Wreckers then tracked the pair until Emirate Xaaron was convinced of Optimus Prime's identity. The Wreckers worked with Optimus Prime in a number of raids on Decepticon bases until he and Ultra Magnus were both transported back to Earth.

The Wreckers next saw action as a unit during the conflict with the insane Autobot scientist Flame, who was planning to activate an unstable reactor at the heart of Cybertron. He kept the Wreckers busy by sending an army of zombies against them, with their resolve taking a dent from the fact that their former leader Impactor was among the undead. With the help of Ultra Magnus and the Sparkabots, along with Decepticons Flywheels and Trypticons, the Wreckers managed to force their way into Flame's control room but too late to stop him turning the reactor on. Emirate Xaaron sent the Wreckers and the others to safety, intending to sacrifice himself to shut the reactor down, although in the end it was Impactor, who had recovered his old memories, who did the job.

Following this, the Wreckers journeyed to Earth having learned that the insane future Decepticon Galvatron was at large there. However, the mission was a disaster from the moment they arrived: Transporting to Galvatron's location using time bridge technology, they found that not only were Cyclonus and Scourge with Galvatron but they had arrived in the middle of a heavily populated human city, meaning they were hampered by the desire not to harm humans. Springer managed to bring the battle to an end by luring Cyclonus and Scourge away from the city. The other Wreckers went to his aid, but Galvatron escaped in the confusion, leaving them with no option but to return to Cybertron.

In order to prevent a repeat of the disaster, Sandstorm and Broadside, together with Inferno, were sent to Earth by shuttle to act as recon. Once they had pinpointed Galvatron's base, Springer followed with not only the other Wreckers but also the Decepticon Mayhem Squad. However, they found that Galvatron was backed up by Megatron, along with Scourge and Ravage, and found themselves heavily outgunned. Despite retreating back to their ship, nearly all the Wreckers and Mayhems were wiped out, and the others only survived because of the arrival of Rodimus Prime with reinforcements.

The incident effectively meant the end of the Wreckers, with only Springer and Broadside still alive from the regular roster. They and Inferno subsequently joined up with surviving Mayhem Squad members Carnivac and Catilla, together with the lost Autobot Skids, to form a new group, the Survivors.

In one timeline, the Wreckers survived until the year 2510, when they killed the last Decepticon, ending the War. Afterwards, Rodimus Prime handed the Matrix to their leader, Springer. However,Triton, a Decepticon double agent who had infiltrated the Technobots, disputed this, suggesting Ultra Magnus should inherit leadership. The two sides began a fierce debate, with Whirl arguing the Wreckers ended the war, so had a right to leadership, leading to Roadbuster being shot by Scattershot. Sandstorm retaliated by killing Triton and soon the Autobots had split into factions fighting a whole new war, to Rodimus's despair.

Regeneration One does not take place in the Marvel UK continuity 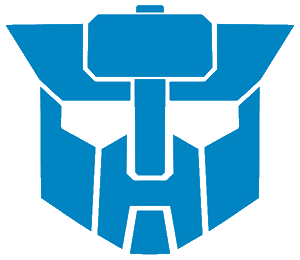 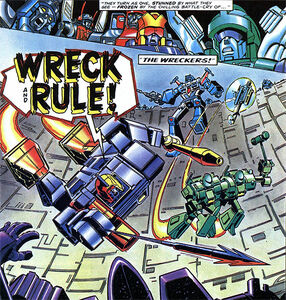