Wukong (birth name Kong), also known as The Monkey King, is a heroic playable champion in the MOBA game League of Legends. He is a Shimon vastaya who was known for his arrogance and his refusal to give up. One day, he met a formidable warrior named Master Yi whom he kept challenging again and again only to be beaten every time, and they soon became friends. After beating Yi in a duel, he accepted to train Kong in the art of Wuju, giving him the new name Wukong. Since then, Yi and Wukong have been training together and defending their homeland of Ionia from the influence of Noxus.

He is voiced by Spike Spencer, who also voiced Shinji Ikari from Neo Genesis Evangelion. In the Japanese version, he is voiced by Masako Nozawa.

Kong is a member of the Shimon, a monkey-like species of vastaya who sought wisdom throughout their lives and turn into stone-like forms upon death to begin the cycle anew. Kong used to play pranks on the other Shimon to their annoyance, and once told them that an elemental dragon was going to burn down their home. While they all fled in fear, Kong was laughing. This caused the other Shimon to run out of patience with him and kick him out of the tribe, so Kong decided to find people who would appreciate his sense of humor. He proclaimed himself "The Monkey King" and challenged humans to duels or games of cunning. One time, he encountered a group of Noxians whom chased him into the forest, and he didn't reveal himself until he was sure that they had left.

Kong wished to meet the combat masters of Wuju, but to his shock the Wuju village had already been destroyed by the Noxians' forces, and there was only a single man who meditated in the ruins. Kong decided to challenge him to a fight, but the warrior beat him instantly. For weeks, Wukong kept challenging him, only to be outsmarted and beaten no matter which angle he came from or which strategies he used, even trying to distract him with hilarious jokes or tampering with his tea.

Kong knelt to the warrior and asked to learn his ways. He accepted and introduced himself as Master Yi, the last master of Wuju, and promised to help turn the vastaya's recklessness into a skilled fighting style. As the two trained together, Yi refused to talk about his past nor why he refused to leave the village. Kong decided to challenge Yi to a duel, making a deal where if Kong won then Yi would tell him his secrets, but if Yi won then Kong would not speak for a year. Yi eagerly accepted the challenge. When the day came, Kong lured Yi into a field of smokepoppies. As Yi was about to make his move on Kong, he instead hit a straw decoy while the real Kong struck him by surprise and grappled him to the ground.

Afterwards, Yi told Kong the truth: he and his disciples had left to defend Ionia from the Noxian troops, but the village was destroyed and most of the villagers had been killed by the attack, leaving Yi as a sole survivor and one of the only Wuju practitioners currently left in existence. Kong realized that he had wanted to protect the Shimon the same way, despite them casting him out. Proud of his student and finding a new sense of purpose thanks to him, Master Yi gave Wukong a special staff reserved for the best students of Wuju. From then, Kong was given the name Wukong.

Even after the war had long passed, the Noxians were still encroaching Ionia and oppressing the natives. Wukong and Master Yi made it their mission to combat injustice and hatred wherever they found it.

Even back when he was known as Kong, Wukong was always arrogant and showoffish, proud of his own fighting skills and wishing to be the best. He enjoys boasting about himself and asking who dares to question his ability. He used to have a habit of playing pranks on the other Shimon vastaya, and had no qualms about crossing any lines since he had scared the other Shimon into hysteria and didn't regret it when they kicked him out of the tribe. Upon meeting Master Yi, he always wanted to challenge him because he admired Yi's skills and wanted to be respected back. Training with Yi has humbled Wukong significantly, to the point where he realized the true worth of defending his people, and he values Master Yi's teachings a lot. Even though Wukong still remains arrogant, he takes his heroic moments seriously and sometimes his more reckless manners of approach can turn out better than the slow and safe ways like Yi's methods. 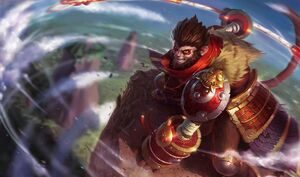