Wulfric first appears in the second episode witnessing Ralph Fitzgerald flirting with his fiancee. Enraged, Wulfric attacks Ralph and breaks his nose, leading to a scuffle that ends with Wulfric being thrown into the stocks.  It is there that he and Gwenda first meet, with her admiring Wulfric for his standing up for a woman.  Later, when Wulfric's father dies, he plans to inherit his father's land but is horrified to find that Ralph Fitzgerald now runs the area and refuses to give Wulfric his inheritence out of spite.  Distraught, Wulfric confesses later to Gwenda, who he has been getting closer to, that without his father's inheritence Annet left him.  He and Gwenda then have an intimate moment and Wulfric accepts her as his new lover.  Gwenda later gives brith to a child, but whether or not it is Wulfric's is unclear.

After learning that Annet was raped by Ralph, Wulfric is all set to kill him but Gwenda convinces him to instead seek justice within the system, which Wulfric begrudgingly agrees to. Unfortunately, though Ralph is convicted he is saved from death by the arrival of King Edward III, who is willing to pardon any criminal who agrees to fight for him in his war with France.

Tragedy strikes when one of Wulfric and Gwenda's two children dies from the Plague, and the two decide afterwards to take up Caris' offer to farm the now abandoned priery lands, even though that for them to do so would be to desert from Ralph Fitzgerald. When Ralph learns of this he is enraged and threatens to murder Wulfric's son if he does not stand down. Wulfric is forced to get on his knees and kiss Ralph's shoes, with Ralph then kicking him and dragging him off to be tortured and hanged. Fortunately for Wulfric, his wife comes to his rescue, rallying the peasants to attack Ralph's thugs. Wulfric later participates in the battle of Kingsbridge and along with his wife and son lives to see both the the end of it and Ralph Fitzgerald's death. 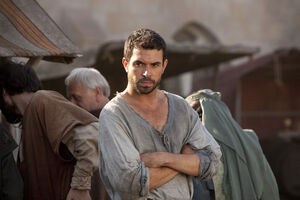 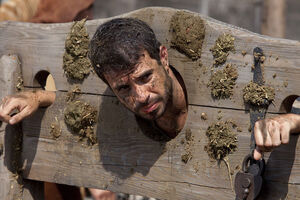 Wulfric in the stocks 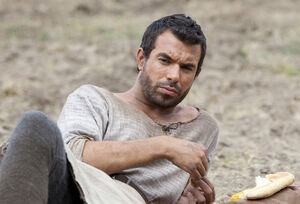 Wulfric relaxing
Add a photo to this gallery
Retrieved from "https://hero.fandom.com/wiki/Wulfric?oldid=1847357"
Community content is available under CC-BY-SA unless otherwise noted.