Yellow
Stunt Man
The Coolest One

Saving the world
Driving on mud

Wyatt was raised in the swamps of Louisiana. That explains why he is the best at off-roading, tearing it up in his yellow Baja Truck! It also explains his fondness for the whole “mud-splattered” look he has going on. He is voiced by Nicolas Roye, who also voices Shingo Tsukino in Sailor Moon.

Not much is known about his past, except that he was raised in the swamps of Louisiana, giving him the skills of off-roading. It is unknown what happened to his parents, but he lives in Hot Wheels Cuty (formerly Hilly Woodlands) with his grandmother, Gammy Gram. At some point, he befriended Gage, Rhett and Brandon and started working at Larry's workshop with them. He mentioned that he has at least 5 cousins named Billy, in which his cousin Billy number 3 is a gator whisper and his cousin Billy number 5 is a plumber.

Wyatt is the driver of his Baja Truck a.k.a. Jump Truck by Wyatt himself, that is until it was destroyed by the Road Pirates and currently drives the Land Crusher. He can sometimes be egotistical as he likes to drive around his truck, even though his tomfoolery sometimes leads to the destruction of property. He sometimes even breaks into arguments with Gage in the first movie about the events. He is shown to have a soft spot to his grandmother, "Gammy-Gram."

Wyatt has a big and muscular body, with light skin and he has a long black hair.

His casual attire includes a gray shirt, blue jeans pants, black boots, yellow bracelets and a brown belt with a gray buckle that has a bull carved on it. He also wears trucker cap with the Team Hot Wheels symbol on it.

When going to drive and save the world, he wears a yellow and black sleeveless uniform with the Team Hot Wheels symbol on the chest, fingerless yellow gloves and black knee pads, He wears a yellow helmet that resembles an alligator's (or a crocodile's) mouth and visor glasses. Of all his friends' uniforms, his has the most savage look.

Wyatt drives a canary-yellow Baja Truck a.k.a. Jump Truck Wyatt named himself, his's Truck can jump on the top on one building to another.

After his Jump Truck was destroyed by the Road Pirates, he started driving a yellow Land Crusher. 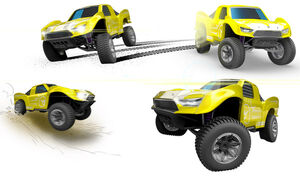 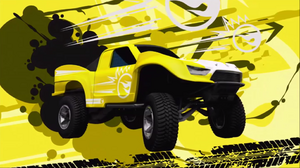