Breaking the instructions (aka. being a master builder)

Save the town of Bricksburg from Lord Business' oppression (first film; succeeded)

Wyldstyle (real name Lucy) is a tough tomboyish girl and the deuteragonist of The LEGO Movie and it’s 2019 sequel The Lego Movie 2: The Second Part, and one of the three main protagonists of LEGO Dimensions. She is Batman's former girlfriend and Emmet's ally and new girlfriend towards the end after Batman broke up with her to briefly hang out with Han Solo, Lando Calrissian, C-3PO, and Chewbacca.

She was voiced by Elizabeth Banks, who also played Betty Brant in the Sam Raimi Spider-Man film trilogy, Effie Trinket in The Hunger Games franchise, Sal in Modern Family, and Tori Breyer in Brightburn. In The Lego Movie Videogame and some promos, she was voiced by Jessica DiCicco, who also voiced Unikitty in the same game, as well as Malina from The Emperor's New School, Selina from Winx Club, Lexi Bunny from Loonatics Unleashed, Lynn Loud Jr. and Lucy Loud from The Loud House, Hanazuki from Hanazuki, Star Sapphire from DC Super Hero Girls and Maggie Pesky from The Buzz on Maggie. In The Lego Movie 2 Videogame, she was voiced by Carla Tassara. In the Japanese dub, she was voiced by Miyuki Sawashiro.

Wyldstyle appears in the construction site where Emmet finds her, searching for something after hours. She takes off her hood and sees Emmet, and suddenly flees. Moments later, she takes out Lord Business' forces and rescues Emmet from the melting chamber (believing him to be the Special) and takes him to meet Vitruvius.

They escape from Bad Cop but Wyldstyle realizes that Emmet is an ordinary and regular guy. They reach the Old West where they meet Vitruvius, who tells Emmet that it is he who found the Piece of Resistance. But Wyldstyle believes that Emmet is ordinarily not able to save the Lego universe. Vitruvius and Wyldstyle use the magic to enter the mind of Emmet. She and Vitruvius are disappointed to see that Emmet doesn't have any creativity, but Vitruvius is astonished to learn that Emmet had a vision of "The Man Upstairs".

Eventually, Bad Cop finds the trio and the heroes are rescued by Batman, who Wyldstyle introduces to Emmet as her boyfriend. They come to the Cloud Cuckoo Land (the home of Unikitty) where they meet with the Master Builders, but none lets Emmet join them upon finding out that he is not even a Master Builder yet.

Bad Cop finds Emmet and the Master Builders (again) and the main heroes manage to escape (again) by creating a submarine. However, the submarine is malfunctioning, but they survive with the double-decker couch of Emmet, with Wyldstyle stating that it was not a bad idea after all.

They are rescued by Metalbeard, and later Emmet convinces the Master Builders to work together. Emmet informs his allies about his plan of creating a space ship that delivers Octan (but this time, using the instructions). The problem is that they need a hyper-turbo, but nothing comes out the Millennium Falcon, they are in Han Solo, Chewbacca, C - 3PO, and Lando, Batman steals the hyper-turbo, and manage to enter the clubhouse of Lord Business. After entering the ship while Metalbeard and Benny enter the computer to disable the shields, Unikitty and Batman distract Lord Business to create prototypes of music and is responsible for monitoring Vitruvius.

Among the products, Wyldstyle confesses Emmet that she wanted to be special and that his real name is Lucy, which Emmet declares that he likes it; both are about to hold hands when Batman interrupts. Wyldstyle leaves and wishes him good luck to Emmet. The plan almost succeeds, but in the end, Emmet and his companions are caught and imprisoned. Vitruvius tries to defend, but Lord Business decapitates him with a coin; with his last words, Vitruvius admits that the prophecy was his own doing. Lord Business throws the Piece de Resistance at the edge of the universe, and total annihilation begins to kill the heroes and flees with Kragle when Bad Cop leaving behind.

Emmet (attached to the battery from total annihilation mechanism and avoiding imminent electrocution all suffer) sacrifices himself for his friends rushed off the edge of the universe. Wyldstyle is saddened by the selfless sacrifice of Emmet. Inspired by Emmet, The Master Builders escape and regroup with the help of Bad Cop, who decides to join them as retribution of how Lord Business has left him for dead; returning to be Good Cop, which a new face is written with a pen. Wyldstyle retransmits the heroic deeds of Emmet on television and people of the whole universe start to use their creativity to create weapons with which to defend themselves. The Master Builders lead a counterattack against Lord Business.

Inside Benny's new spaceship, Wyldstyle wonders if Emmet could see what happens to the people of Lego Universe.

Seeing that many Microbots overwhelm the heroes, the Master Builders have little option but to surrender. But Emmet comes and rescues his friends. Wyldstyle is very happy to see him return, telling him to go to Lord Business.

When Lord Business destroys the Kragle, all the Robots and Microbots are decimated. Wyldstyle hugged Emmet and decided to be his girlfriend instead and dumped Batman, which Batman allowed and told Wyldstyle that she can be happy with the man she loved the most.

Before the movie ends, Emmet, Wyldstyle and his friends saw they are coming DUPLO aliens are invading the world and they all gasp. The film ends at that point, signaling to make a sequel.

Once the DUPLO Aliens come up, she was ready to battle again, but Emmet stops this and decides to talk to the aliens. He first manages to be friendly with them by building a heart to them as a gift. However, the Aliens eat the heart and they ask for more. Lucy quickly makes a big hammer and punches them, but makes the aliens scream out loud and starting attack Bricksburg once for all.

5 years after the DUPLO attack, Lucy and the rest of the civilians of Bricksburg were affected by the change, with the exception of her boyfriend Emmet, who pretends that everything is still awesome, despite saying not everything it is. Emmet tells Lucy he has some dreams about "Our-Mom-Ageddon", which involves some of the characters later presented in the film and the LEGO World being sucked by a giant hole. Although, Emmet wants to rebuild the future by making a house to both of them. After a tour in a new house build by Emmet, Lucy is worried that the house might be destroyed and the fact that Emmet still believes everything is awesome. She asks him to promise to grow up so he can adapt to these modern times. Emmet promises he will try.

When Emmet sees a shooting star, is actually revealed to be a spaceship for another planet, and Wyldstyle seeing this whit giant glasses, questions why is here. The alien is revealed whit the name of Sweet Mayhem and takes her and his friends (Batman, MetalBeard, Unikitty and Benny) into his ship. In the Systar Sistem, they met Queen Whatever Wanabi, and she manages to change the other master builders, but Lucy knows something's up with Wanabi and her plans. After a forced spa in Planet Sparkles, Lucy gets her original color hair, which is blue and pink made of candy. She tells she was unsure of herself and she dyes her hair using a black marker. Lucy was later set to be "brainwashed" with Cathy Song, but he managed to escape despite seeing his friends "brainwashed".

Once they escape for the Duplo Brickyard, she is reunited with Emmet and they embrace, but no so much when she meets Rex Dangervest. Rex tells Emmet has managed to have his own abilities and force by making him tough. Despite Emmet's joy of this by impressing her, Lucy is sort of disappointed by this. They make up a plan which involves switching off the pop music that is brainwashing the others, while Emmet will destroy the reception cake encased in a temple to stop the wedding between Batman and Wanabi. However, Rex and Emmet are shocked when Lucy reveals her original hair to them, and she affirms she is not brainwashed. Despite Rex warnings, Emmet believes is the real Lucy because he trusts her, and she helps them to the plan.

As Lucy fights Mayhem to get to the music and saves her after almost falling and revealing her own face and personality, she learns the true nature of Mayhem and that the Systar System never meant to be antagonistic to Apocalypseburg, but instead were trying to establish peace between them, and simply failed at communicating this well. And all of that started when Emmet made that heart to the aliens which are actually Wanabi's. Lucy also discovers her friends are not brainwashed, but rather enjoying the Systar Sistem. Sorry for wanting Emmet to change, Lucy tries to prevent him from destroying the temple, but Emmet, facilitated by Rex's manipulations, destroys the temple anyway, believing that Lucy was brainwashed (As she makes sure is the real her and she still likes his song) and the fact that the real Lucy would never like Everything is Awesome, leaving her heartbroken. This creates a hole in the LEGO universe, and Wa'Nabi warns them that everything Our-Mom-Ageddon has on all of them.

Lucy somehow gets in the Real World, when she sees the act of destroying the temple is represented by Finn angrily destroying Bianca's LEGO creations, and discovering Finn's is actually Emmet's behaviour. The mother gets furious and orders them to put the LEGOs into storage, leaving Lucy and the others in the box. Thinking everything is lost, she encourages the others by singing and they finally escape from the storage bin and brings them back into the LEGO world with Finn freeing all of them.

While Emmet and Rex fight behind the clothes dryer in the real world, Lucy gets to reunite with Emmet and manages to trick Rex into punching a cute sentient heart, triggering an explosion, destroying his time machine and Rex topples in defeat. Lucy then tells Rex that Emmet will not become like him but he can be like Emmet as they ask him to join them, but Rex denies since he realizes that Emmet being saved by Lucy means he didn't end up becoming him, erasing his timeline and causing the deluded time-traveler to begin disappearing limb by limb. As he fades away, she thanks Lucy for saving both him and Emmet. After that, Emmet and Lucy reconciled each other for what they have done, declaring to each other being Special Best Friends forever.

Wa'Nabi and Batman finally get married, represented by Finn and Bianca reconciling with each other and agreeing to play together again. Their mother returns their toys, averting Our-Mom-Ageddon. The LEGO universe is transformed into a mishmash of Apocalypseburg and the Systar System called "Systocalypstar" which is peaceful. Emmet rebuilds his home with Lucy, who reveals she was one of the original artists of "Everything is Awesome" as Emmet gasps in response.

She is as "tough as nails" and is Emmet's love interest. As an independent figure, she doesn't let others give her orders easily; as a Master Builder, her creativity rivals even her no-business attitude. Despite this, she has a caring heart and puts a great deal of faith in those she considers friends.

Since meeting Emmet, she believes him to be the "Special", the figure destined to save the LEGO universe. Of course, he doesn't believe himself to be special at all, so it's up to her to convince him otherwise—whether or not he likes it. She is Batman's former girlfriend. 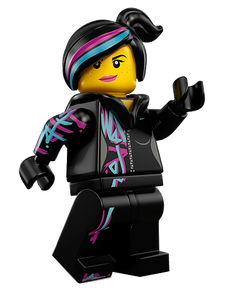 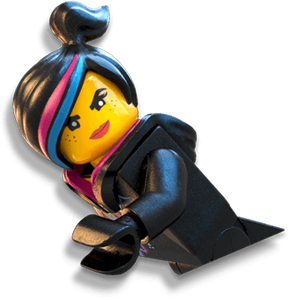 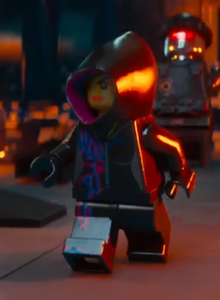 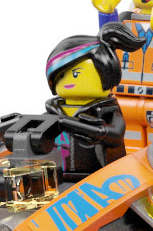 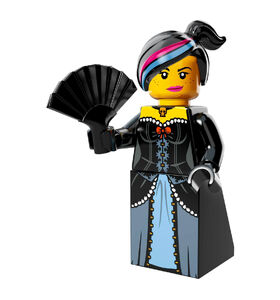 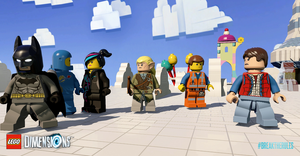 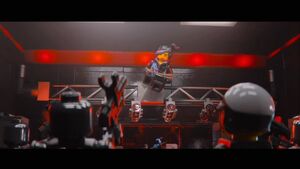 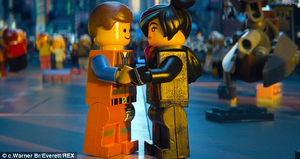 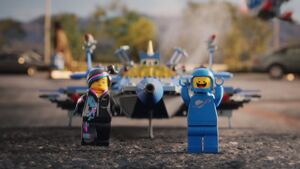 Retrieved from "https://hero.fandom.com/wiki/Wyldstyle?oldid=2237659"
Community content is available under CC-BY-SA unless otherwise noted.