To help Wolverine and his friends.

Laura Kinney, also known as X-23 is a fictional super-heroine that appears in Marvel Comics, in particular those featuring the X-Men. X-23 is the daughter of Wolverine born through artificial insemination of his genetic code.

She was created by Craig Kyle and Christopher Yost in her first appearance in the X-Men: Evolution animated TV series, and made her first comic appearance in NYX #3 in February of 2004.

The Canadian genetic research and development organization known simply as "The Facility" attempted an endeavor it called the Weapon-X project, which involved grafting adamantium to a skeletal structure of a mutant to create an unbeatable living super-weapon. With test-subjects ranging from dead to insane, the only thing close to a success was the mutant more commonly known as Wolverine. Though Wolverine had escaped, The Facility attempted to track him down for years. Finally, The Facility classified Wolverine as not worth the time and resources it was taking to find and detain him and turned to a researcher called Sarah Kinney, who had proposed a replacement of Wolverine via cloning.

Kinney was given funding and a sample from Wolverine during his captivity, then set about the project. The genetic sample was a damaged however Kinney stated that if she were allowed to the remove X-chromosome she could circumvent the damage. The Facility turned down Kinney's request, not wishing to risk changing the sample on a genetic level, for fear of altering the clone's mutant properties. Sarah Kinney did not take the news well and decided her project must move forward, moving ahead with the project anyway.

Though the members of the research team were not happy about proceeding without the Facility sanction they were either paid or pressured to participate in the project anyway. After twenty-two failed attempts to stabilize a fetus the twenty-third trial proved successful. One of Kinney's research assistants, Dr. Zander Rice, who had lost his father to Wolverine, persuaded Kinney to carry the clone to term herself. Rice convincing Kinney that giving birth to the specimen herself would stabilize the project, though in truth this was just an act of resentment towards his project leader for forcing him on the project. Kinney carried the X-23 to term and the X-23 clone was born, which Sarah decided to formally name Laura.

Laura was trained for years as the perfect killing machine. She was taught several different forms of hand to hand combat though-out her childhood and taught how to use Trigger Scent training which allowed her to smell targets more reliably than a blood-hound. Laura was exposed to many different forms of abuse to condition her as an emotionless tool and prevent a repeat of Wolverine's rampage at the attempts be controlled.

Amidst the sink-or-swim training and psychological conditioning to view herself as just a weapon Laura was secretly and subtly nurtured by Sarah Kinney, calling her by her name, reading her stories, and attempting to help her work-through psychological scarring. By age 11, the training was complete and she underwent the revived Weapon-X project giving her adamantium coating to her skeleton. Once complete, Laura was sold off as an assassin to one of the Facility's bidders.

Laura proved herself a notable assassin. In response to a client asking for a particularly powerful mobster dead, and completion of the mission the Facility came under scrutiny. Rice used the political situation to his advantage and had Laura kill the Facility overseer and his entire family after which point he would take over. Laura did as she was told, though she could not bring herself to finish off the man's child. Once X-23 returned and told Laura of what had happened, the weight of what Laura was been made to become hit Dr. Kinney hard and she decided to set Laura free.

Kinney had Laura destroy the other clones and research, which she did as instructed but the escape attempt would cost to Kinney her life as Laura ended up inadvertently killing her in the escape. In her final moments Sarah Kinney told Laura she was her daughter and that her proper name was Laura, triggering in X-23/Laura an emotional break-down as she witnessed her mother dying. Dr. Rice see left Laura behind to die rather than deal with the emotional damage that had been done and claimed Laura had not made it out as such there were no attempts made to recover her.

Laura would eventually pledge her services to Wolverine, who was acting head of the Xavier Institute of the Gift at the time. It took Laura years to unlearn all her conditioning and function normally though she never truly adapted to a passive lifestyle. She continued as a loyal, though emotionally temperamental member of the X-Men ever since the reunion with her biological father. 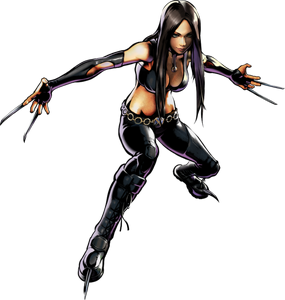 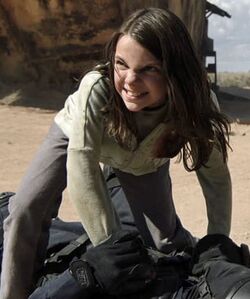 Dafne Keen as Laura in Logan. 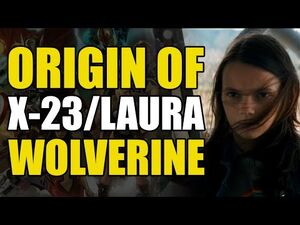