Start a Wiki
X-Factor is an organization in Marvel's comic book series of the same name, first appeared in 1986, featuring an eponymous team composed of the five original X-Men that debuted in the first issue of X-Men in 1963.

The founding of X-Factor hinged upon the reunion of the original X-Men, an event complicated by the extensive histories of the characters following the initiation of a new team of X-Men.

The original X-Men disassociated with the current team because Professor X had placed their old nemesis Magneto as its leader. The five set up a business advertised as mutant-hunters for hire, headquartered in the TriBeCa neighborhood of downtown New York City, posing as "normal" (non-superpowered) humans to their clients. The mutants X-Factor captured were secretly trained to control their powers and reintegrated into society.

The team would also go into action in costume, posing as mutant outlaws known as the "X-Terminators". Eventually, the team decided that the "mutant-hunter" ruse did more harm than good by inflaming hatred. Not only was the concept rejected, but it was blamed on X-Factor's original business manager, Cameron Hodge, who was revealed as a mutant-hating mastermind.

The new X-Factor worked for the Pentagon making them the only salaried mutant team. Their relationship with their benefactors was often strained and complicated.

Multiple Man had apparently died of the Legacy Virus, a deadly illness that attacked mutant genes, which was later revealed to have killed only one of his duplicates. Strong Guy was put into suspended animation after suffering a heart attack caused by the stress his extra mass put on his body. Wolfsbane, who had been cured of her fake love for Alex, transferred to the European mutant team Excalibur. Havok left to infiltrate a mutant terrorist ring. A new X-Factor line up was introduced, consisting of Forge as the team's new leader, Polaris, Cooper, and several new recruits.

More political and espionage elements came into the series, a trend that culminated in the team's secession from government sponsorship. Multiple Man and Strong Guy appeared again at the same time. Despite Forge managing to fix Strong Guy's problems, he did not rejoin the team. Wild Child mutated out of control, Mystique hunted down Sabretooth, who had kidnapped young Trevor Chase, and Forge wanted nothing to do with X-Factor.

Following the previous entries, this series focused on the government's new Mutant Civil Rights Task Force, humans who investigated anti-mutant hate crimes and inadvertently discovered an anti-mutant conspiracy within their own ranks. This series focused heavily on the "mutants as a metaphor for minorities" aspects of the X-Men concept.

The initial staff consisted of Madrox's best friend and special enforcer, Guido Carosella (Strong Guy) and former teammate Rahne Sinclair (Wolfsbane). Following the House of M, Madrox newfound wealth from winning a Who Wants to Be a Millionaire?-style game show allowed him to recruit several of his former colleagues of the Paris branch of the now defunct X-Corporation. New members include M, a powerless Rictor, Siryn, and Layla Miller, who has inserted herself into the group to keep them from discovering the truth behind the mutant Decimation.

The members of the team, as constituted in early 2007: Guido, Jamie, Layla, Monet, Rahne, Rictor, and Siryn. An eighth member was acquired temporarily a little later in 2007, when Monet rescued (or abducted, depending on your viewpoint) a French orphan girl named Nicole (with the reluctant help of Siryn and the clandestine help of a mysterious hooded personage of great power) and took her back to America. Nicole was supposedly the orphaned daughter of ex-mutants lynched by a mob. Monet felt personally responsible for Nicole because she had tried, but failed, to prevent the pogrom. Nicole, in an attempt to kill Layla, is later revealed as a robot and hit by a train. Nicole's cover story was a total fabrication. She had been manufactured as a tool to destroy X-Factor.

Peter David has put a noir spin on the mutant series and has dealt with the former Multiple Man, Jamie Madrox as the central character. The new series spins directly out of House of M and opens with a suicide attempt by Rictor, who has lost his powers in the Decimation that has caused 90 percent of all mutants to lose their powers. The series deals with the attempt by the group to unravel the truth behind the decimation and its aftermath, getting involved with the events of Marvel's crossover Civil War, fighting with Singularity Investigations, and dealing with Madrox's powers and the consequences of it.

The team also attempted to protect Professor Xavier when the Hulk attacked him and the New X-Men.

In the first half of the timeline, Jamie and Layla travel to a hideous future in which mutants are persecuted and imprisoned. Jamie manages to escape, and to return to the early 21st century, but Layla is still trapped in that undesirable future. Rahne believes she knows that Layla will return and will marry Jamie when she grows up. However, she fears (because of a glimpse she has had of the future) that she (Rahne), while in her wolf shape, will murder both Jamie and Layla. To prevent this, she quits the team and joins X-Force. Rictor also quits. The team is down to only four members: Jamie, Guido, Monet, and Siryn. They are attacked by The Isolationist a villain with a plan to kill all mutants but defeat him with the unintended help of Pietro Maximoff.

Later on Jamie travels to the future with the help of an aged Layla Miller and helps the Summers rebellion, led by a cyborg Scott Summers and his daughter Ruby, while the rest of the team is in the present. After battling Arcade who captured Rictor (who then rejoins), the team is joined by the real Longshot and Darwin and meets one of Jamie's duplicates, who calls himself Cortex. 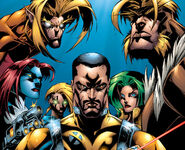 Add a photo to this gallery
Retrieved from "https://hero.fandom.com/wiki/X-Factor?oldid=1755861"
Community content is available under CC-BY-SA unless otherwise noted.