Protect the entire human race from Magneto and his allies

The X-Men are mutants, a subspecies of humans who are born with superhuman abilities. The X-Men fight for peace and equality between normal humans and mutants in a world where antimutant bigotry is fierce and widespread. They are led by Charles Xavier, also known as Professor X, a powerful mutant telepath who can control and read minds. Their archenemy is Magneto, a powerful mutant with the ability to generate and control magnetic fields. Professor X and Magneto have opposing views and philosophies regarding the relationship between mutants and humans. While Professor X works towards peace and understanding between mutants and humans, Magneto views humans as a threat and believes in taking an aggressive approach against them, though he has found himself working alongside the X-Men from time to time. 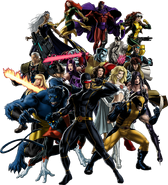 Add a photo to this gallery
Retrieved from "https://hero.fandom.com/wiki/X-Men_(Marvel)?oldid=812749"
Community content is available under CC-BY-SA unless otherwise noted.