Heroes Wiki
Register
Don't have an account?
Sign In
Advertisement
in: Candidate for Deletion, Article stubs, Ben 10 Heroes,
and 17 more

XLR8 is one of Ben Tennyson's forms from the first Ben 10 series. His best known superpower (as Ben Tennyson's suggested name proclaims) is super speed.

He is the Omnitrix's DNA sample of a Kineceleran from the planet Kinet.

He is voiced by Jim Ward in the original series, Yuri Lowenthal in Omniverse.

XLR8 is a blue velociraptor-like alien, He wears a black helmet with a blue visor, He has round black wheels attach to ease feet with two toes, He has three black scissor-like claws, He can has pointy elbows, He has noseless face with green eyes and a mouth with black lips, He also has a blue tail with black stripes.

In Ben 10: Omniverse, his design changes for both Bens, 11-year old Ben as XLR8 remain the same with his whole neck is white and his tail has only 3 blue stripes.

16-year old XLR8 is taller, 4 blue stripes, green on the Omnitrix symbol and green stripe on his suit. Also, he is muscular and sound similar to 16-year old Ben.

When Ben is XLR8, it's more of a speedster persona. Confident, clever, hyperactive and impatient, always rushing in and keeps moving around at high speed. Also, tend to be mischievous.

XLR8's speed does not always work on all surfaces, like ice or strong adhesives, which can slow him down.

It was revealed in Rules Of Engagement that XLR8's tail could be held down to keep him in place.

He is the fourth alien to be used after Ben finds the Omnitrix.

In The Big Tick, Ben transform into XLR8 to use his sharp claws to piece the Great One's shell, but with no effect.

16 year old Ben only used XLR8 in the crossover special for Ben 10 & Generator Rex: Heroes United. He was used to save Dr.Holiday from falling out of Alpha's hand. XLR8 also have no speaking role. 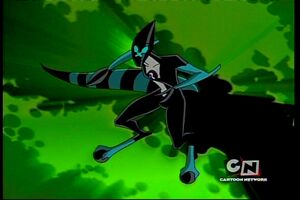 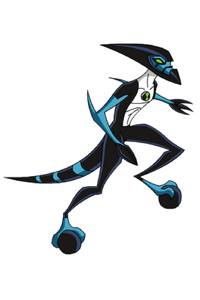 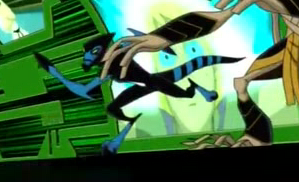 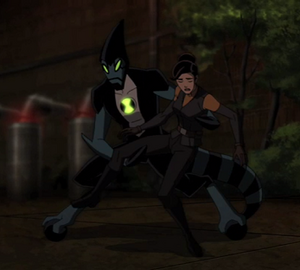 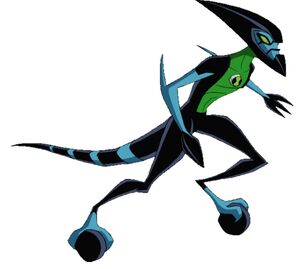 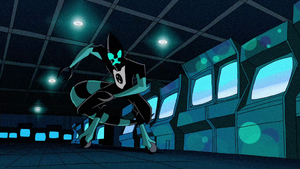 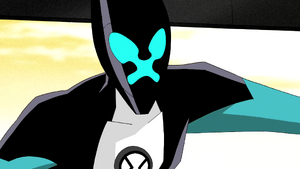